Where we discuss new analog design ideas for Pro Audio and modern spins on vintage ones.
Post Reply
163 posts

I tried the OPA 1656 chip in the notch filter and it works fine.

Here's some photos of the attenuator I built based on 'O' or 'Box' pads. I recommend this type of pad as it is 'ground free' and so does not have any grounding funnies. My fancy 'scope which also does Bode plots, shows that it is flat from d.c. up to 5MHz (-0.1dB and a fraction of a degree phase shift) and can't measure the insertion loss as it is so low. The case is lined with self adhesive copper plate except for the front panel which is done with 3M nickel screening sheet, and the interlinks are done with 0.4mm silver plated copper wire. Not a sign of any mains or RF pickup.

All pin 1s on the XLRs are star linked and floating with an option to connect them to the case screen on the back panel. The front panel legend is rudimentary but works for me. The leads coming off the back of the PCBs connect to 'finger' tracks between each pad to add to the screening.

A couple of questions for you. What is the "dBc" measurement that you use - that's a new one to me - what is the reference level?
Secondly, have you thought of doing a variable frequency version. A 15k/30k 1% wire wound pot with a gearing mechanism would give a good range variation in the first instance. Coupled with an output attenuator it might be a commercial opportunity there for you

I would have used a floating attenuator if I didn't have the need for unbalanced outputs.

The ground on the one I have should be liftablle however since for balanced loads the net current in the ground is zero. That assumes perfect resistor matching so at the lower steps the error might be larger than unbalanced.

dBc is a ratio relative to the carrier level. If the measurement reads -120 dBu and the output level is +20 dBu the ratio is -140 dBc.

dBc is a little easier to follow with all those leading zeros in front of the percent sign. Somewhere below 0.000n% they become a blur and I have to count the decimal places. "Wait was that 4 or 5 leading zeros?"

I hadn't thought about a tunable one but do want to try 100 Hz and 10K fixed versions.
https://ka-electronics.com
Top

The Attenuator boards for ULDO-Nacho arrived:

I used DC as a source and the DC dB capability of the Fluke 8050A meter to check attenuation accuracy prior to actually hooking it up to ULDO.

I got the layout balance right...

I'm using ULDO's on-board 49R9 build-out resistors since there will be a short length of cable between it and the attenuator.
For that reason two resistors are linked.

Once I get it hooked up to ULDO I can better read the low-level accuracy.
https://ka-electronics.com
Top

Just got a new run of ULDO-Nacho boards in. 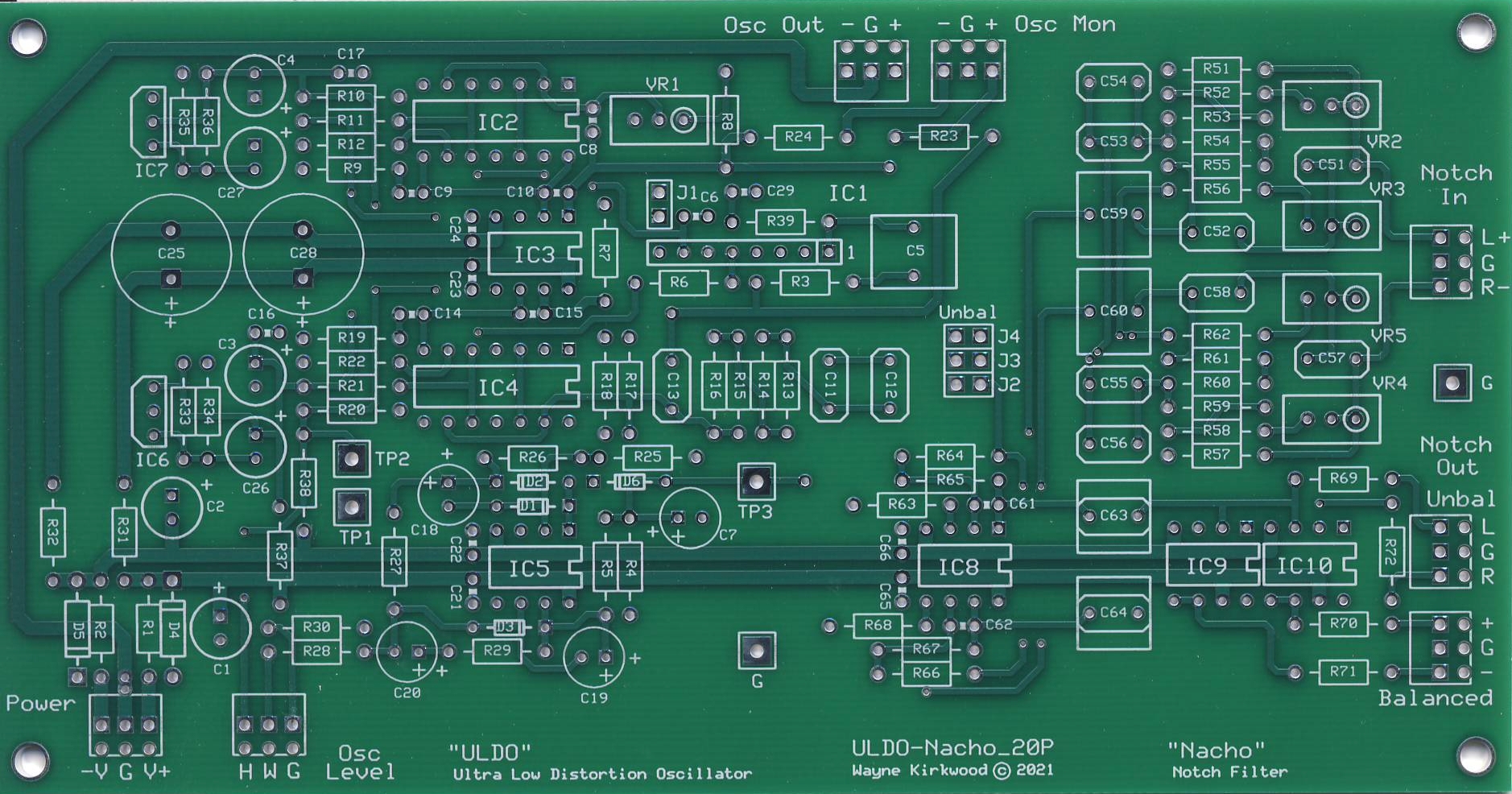 The new boards have three improvements.

A second "Generator Monitor" Phoenix connector was added to keep from having to mult the output to both the load and notch filter input. The monitor ground connection is intended to be connected to a non-current-carrying shield.

I also added a 150KΩ + 10 pF series RC to ground at the VCA input to maintain an input impedance seen by the VCA to about 60K at HF.

D6 provides a clamp for the Ec voltage to about 600 mV to decrease the AGC loop recovery when the output is saturated or when J1 is opened for test.

I'll be putting these boards and boards plus THAT IC kits in stock in the next day or two.
THAT2180s are very hard to come by right now as are most ICs but I have some to bundle with boards.
The THAT340 and 1246 are available in stock at Mouser as well.

This is the current schematic for the oscillator portion of the board. The notch filter hasn't changed. 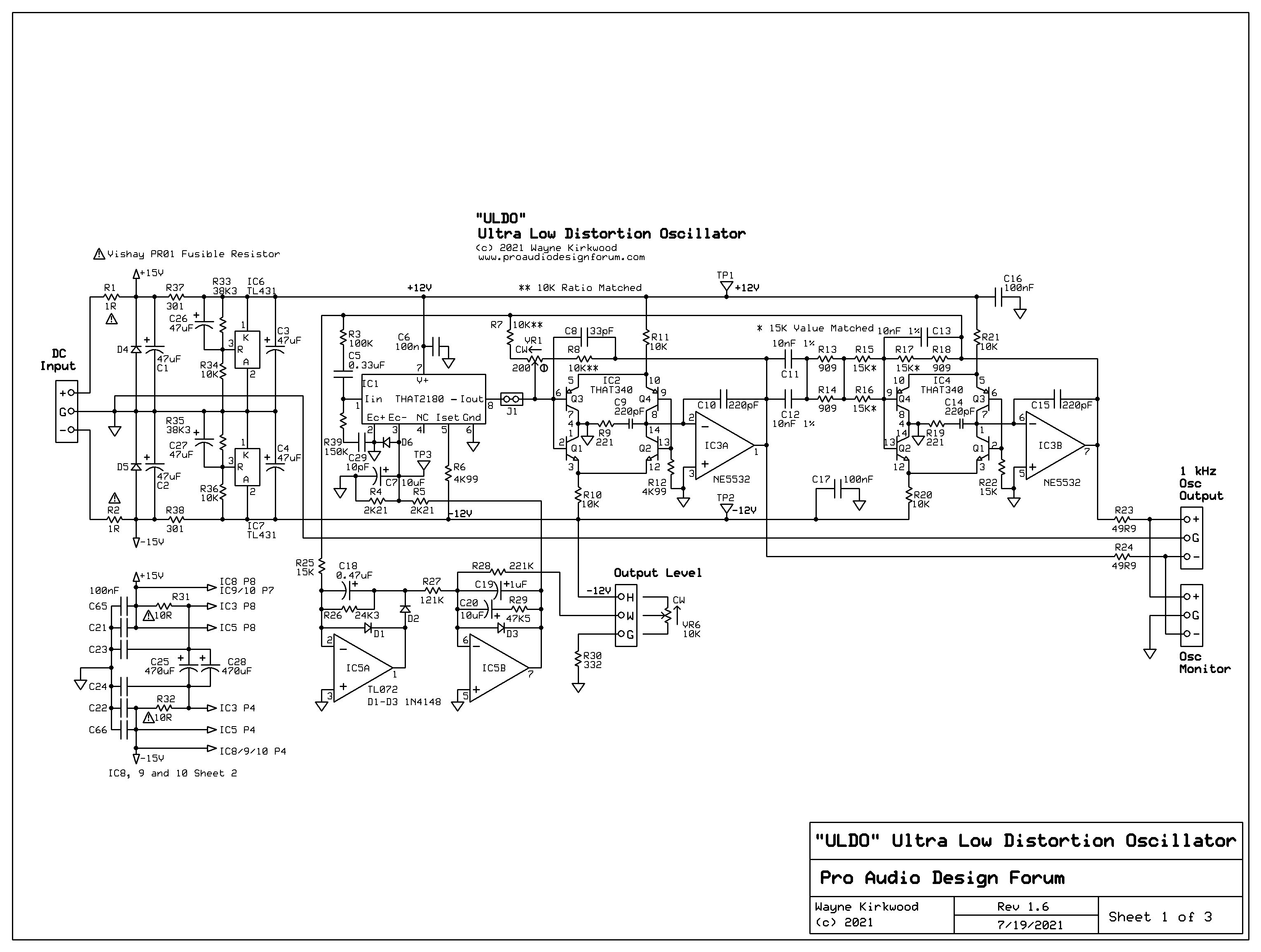 your attenuator board looks a lot better than mine

I'll add the osc mods to my board when I am next down the workshop. I also added a switch to the notch filter input to put the osc in circuit. Twisted pair seem to work ok.

your attenuator board looks a lot better than mine

I'll add the osc mods to my board when I am next down the workshop. I also added a switch to the notch filter input to put the osc in circuit. Twisted pair seem to work ok.

Thanks Fred.
I'm intending to do the very same thing - add a switch to direct the notch filter input to the front panel connector or the oscillator monitor out.
Now that I have all the pieces I need to work on signal flow.

I'll soon be connecting that attenuator board to a 50+ year-old Grayhill switch. I'm curious to see what distortion 50 year-old contacts have. I probably have 10 or more 8 position 2 pole Grayhills I bought surplus years ago.

The RC network at the VCA input arose from my finding a passage in the THAT2180 datasheet that reads:

An additional consideration is stability: the internal op amp is intended for operation with source impedances of less than 60 kΩ at high frequencies. http://www.thatcorp.com/datashts/THAT_2 ... asheet.pdf (page 7)

Gary Hebert gave me the values for a 100K input resistor.
I hadn't seen any stability issues but it seemed like a good idea to include them anyway.
https://ka-electronics.com
Top

I just checked Atto's balanced attenuator error by reading directly in DC mV and then converting to dB. This time I had the build-out resistors included. The load was 597.5Ω.

I just finished building a board and decided to compare the performance of various op amps in ULDO-Nacho.

The test circuit is ULDO-Nacho feeding the ATTO attenuator at -20 dB attenuation for a 0 dB balanced output into the Focusrite 2i2 A/D.
The actual output of ULDO feeding the attenuator is +22 dBu (balanced) into an impedance of about 1300Ω.
Nacho's input samples the direct output of ULDO at +22 dBu.

The results are somewhat surprising in the 10-20 kHz octave though the actual THD of ULDO is about -141 to -143 regardless of the DUT op amp. (About 0.075 ppm or 0.0000075%.)
The last octaves don't carry much weight due to their level but the differences are instructive.