This is where we talk about testing, measuring and repairing things. Sometimes we have to repair the equipment we use to test, measure and repair other things. It's an endless cycle of fixing the broken things we need to fix other broken things.
Post Reply
18 posts

I have several Fluke 8050As and they represented a good value in the early 1980s. The dB measurement, decent AC bandwidth, Relative function and Conductance mode make it an even better value in 2021 when found used on eBay in the $30-100 price range.

You can get these functions in a modern B&K and Siglent for about $400. A Bench Fluke with the 8050A's features runs about $1100. All of the newer meters use beautiful VFD, LCD or perhaps OLED meters which will one day have the same issue as the 8050: They won't be available. My experience with Chinese test equipment is that it's unserviceable because there's little documentation and replacement parts.

Caps and NiCds are easily-fixed. FWIW an 8050A will not run if the NiCd have failed.

Bad LCDs are another matter. They are virtually unobtainable.
Sooner or later an 8050's LCD is going to fail and there are a lot of 8050s needing LCDs.

So why not use LEDs?

Lots of people have with really good results.
What I've seen has worked out really well: https://lous.home.xs4all.nl/fluke/Fluke8050Asite.html

Most of these approaches use the existing CMOS LCD drivers, CD4054 and CD4056, to drive hi-eff LEDs in parallel.

This requires adding 2K2 series resistors and then hard wiring each segment to an IC pin. 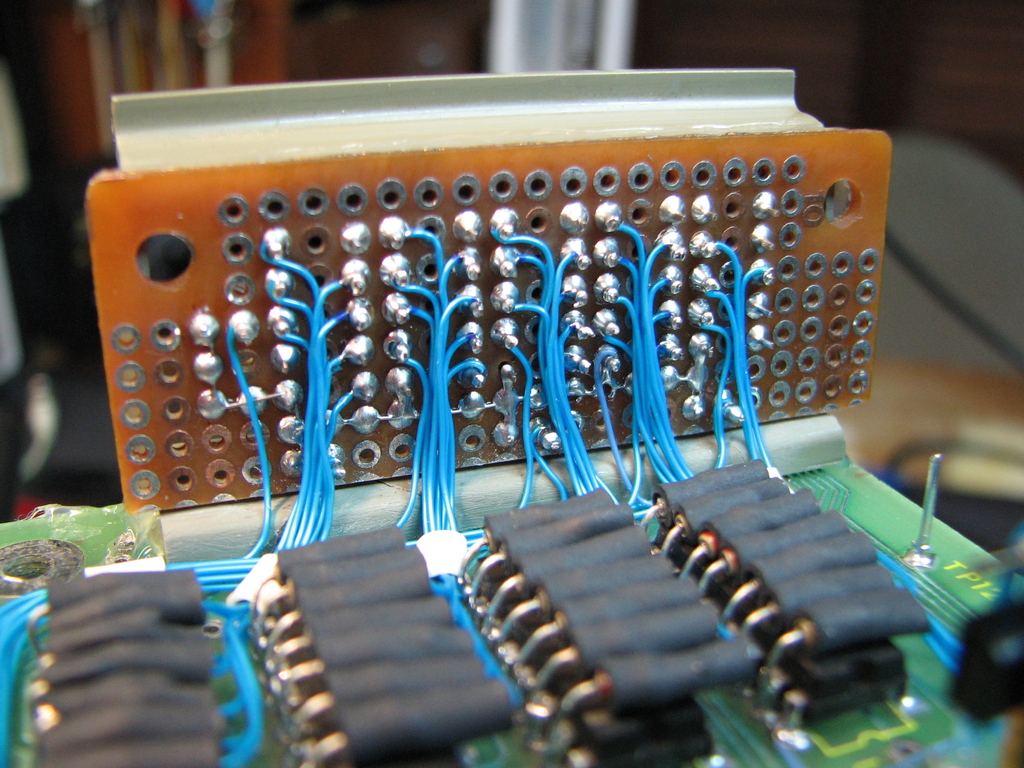 This solution is nice but its not something I'd want to do more than once.

The problem with using parallel drive to LEDs is not electrical it's mechanical.

There are just too many connections and in the display area and the connector pitch has to be fine.
Fluke used a conductive elastomer strip to connect the LCD to the board.
The LED display is also at right angles to the plane of the decoder board.

One ambitious modifier decoded the scan information from the 8050's CPU and used an LCD display.

The results are very nice: https://www.transsys.com/posts/fluke8050a/intro/ 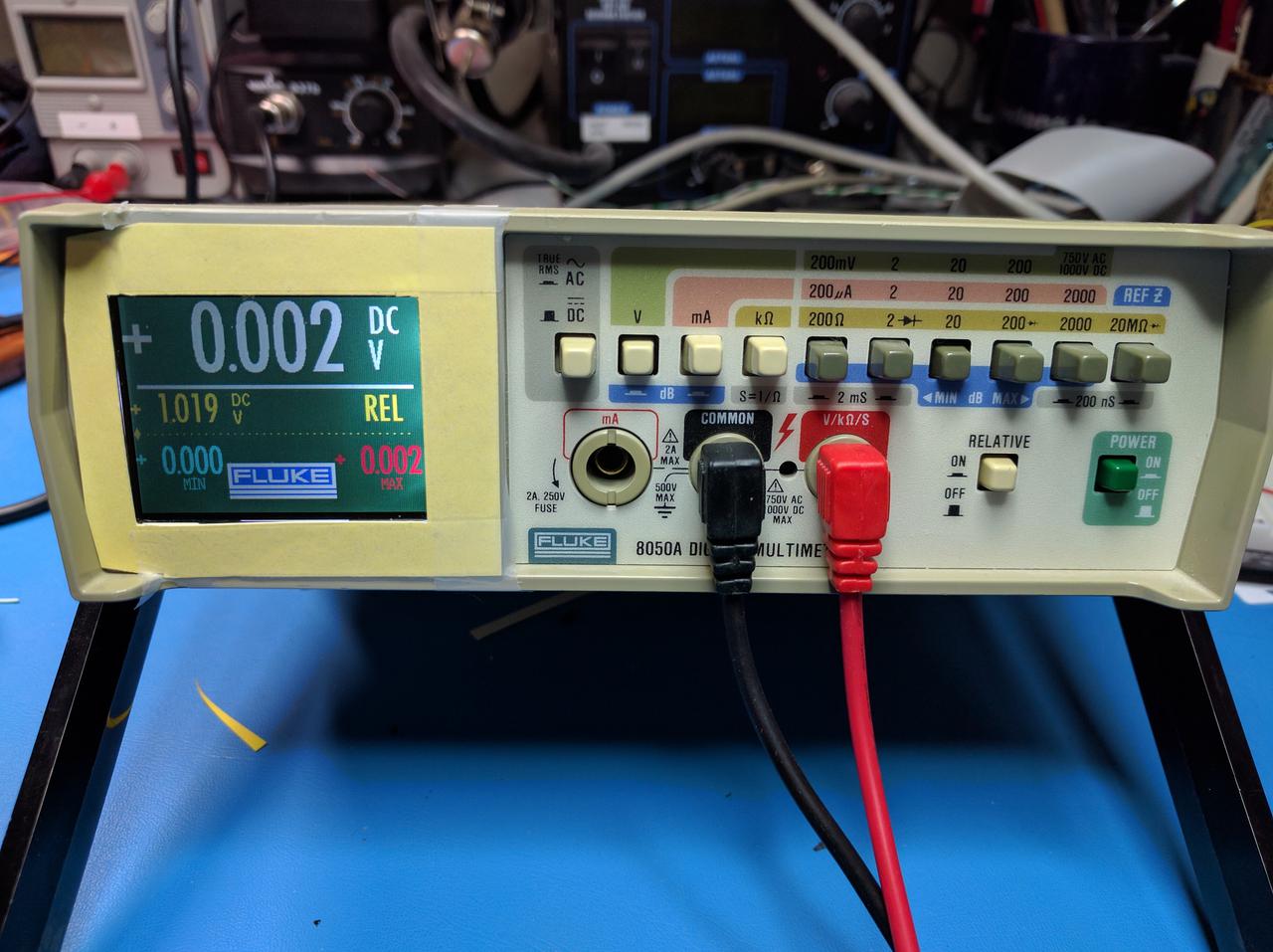 The problem with LCD replacement is that it will also eventually fail.

The main board of the Fluke 8050 contains all the analog circuitry and the host CPU. 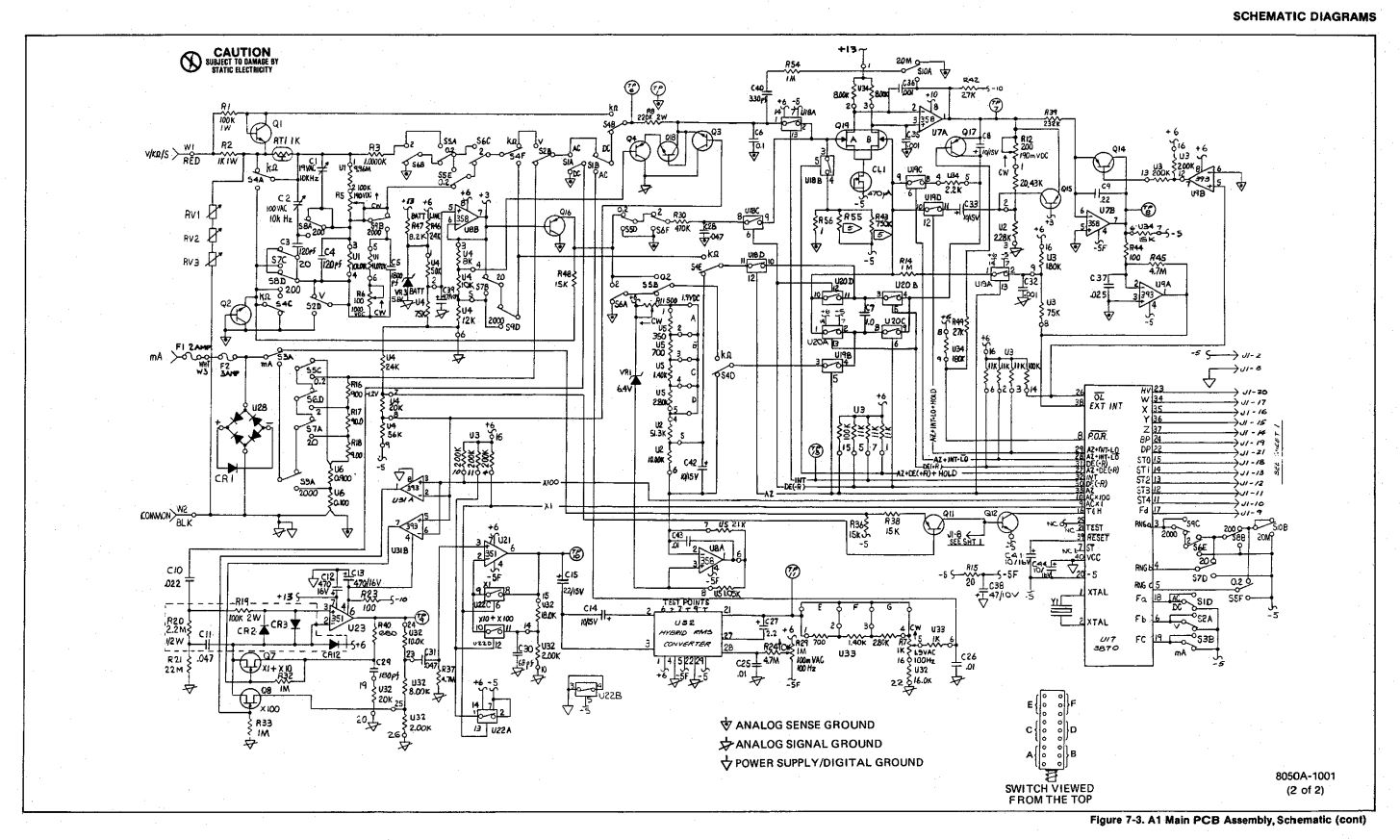 The main board connects to the display decoder, LV power switch, Relative button and Battery charge LED by a 22 conductor flex circuit.

I'd like a solution that reads the host's scanned output which is about a dozen or so lines and drives the LEDs scanned to reduce display connections. (The BP backplane line is not required.)

The only active circuitry on the display board are the CD4054/CD4056 decoders. 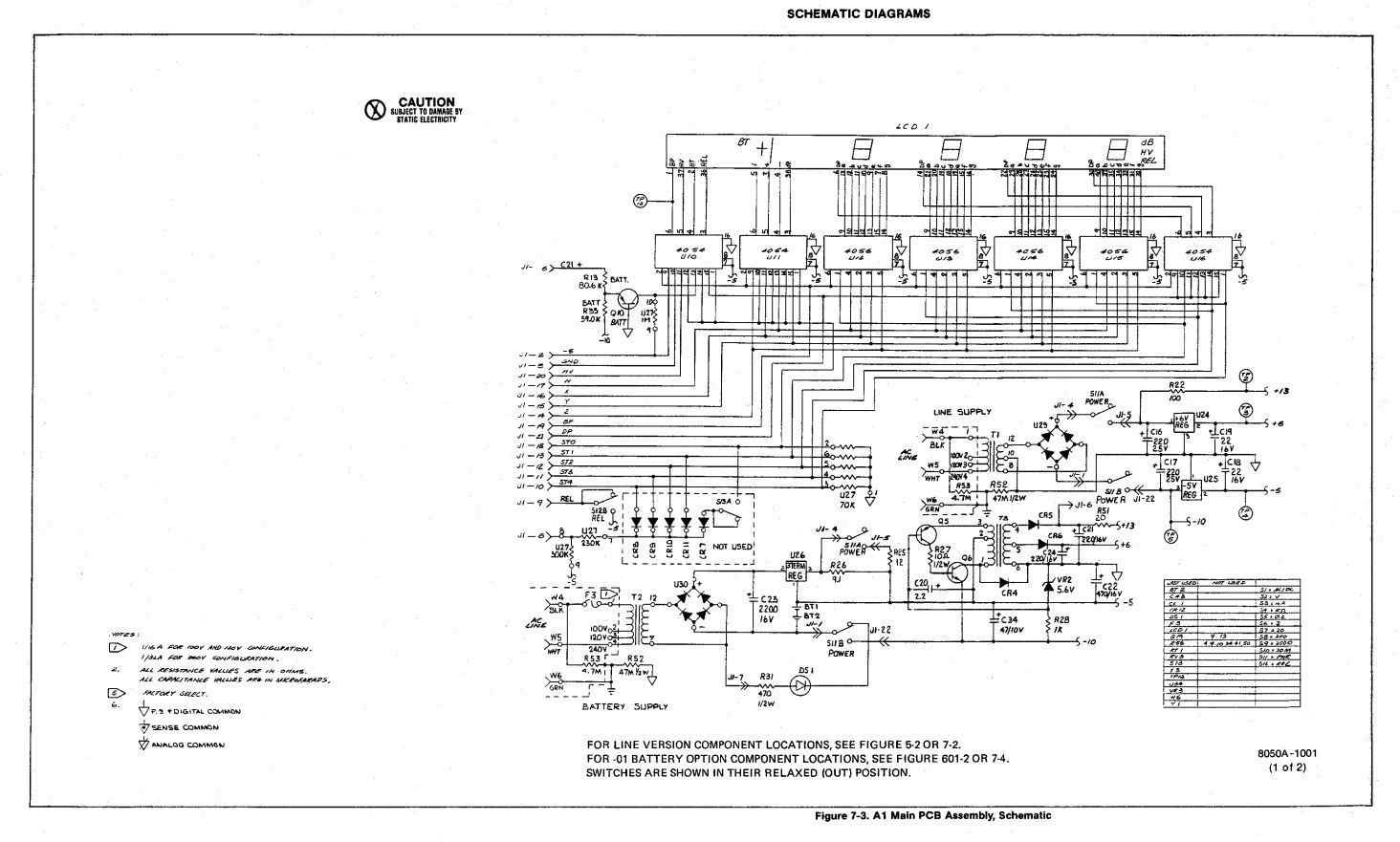 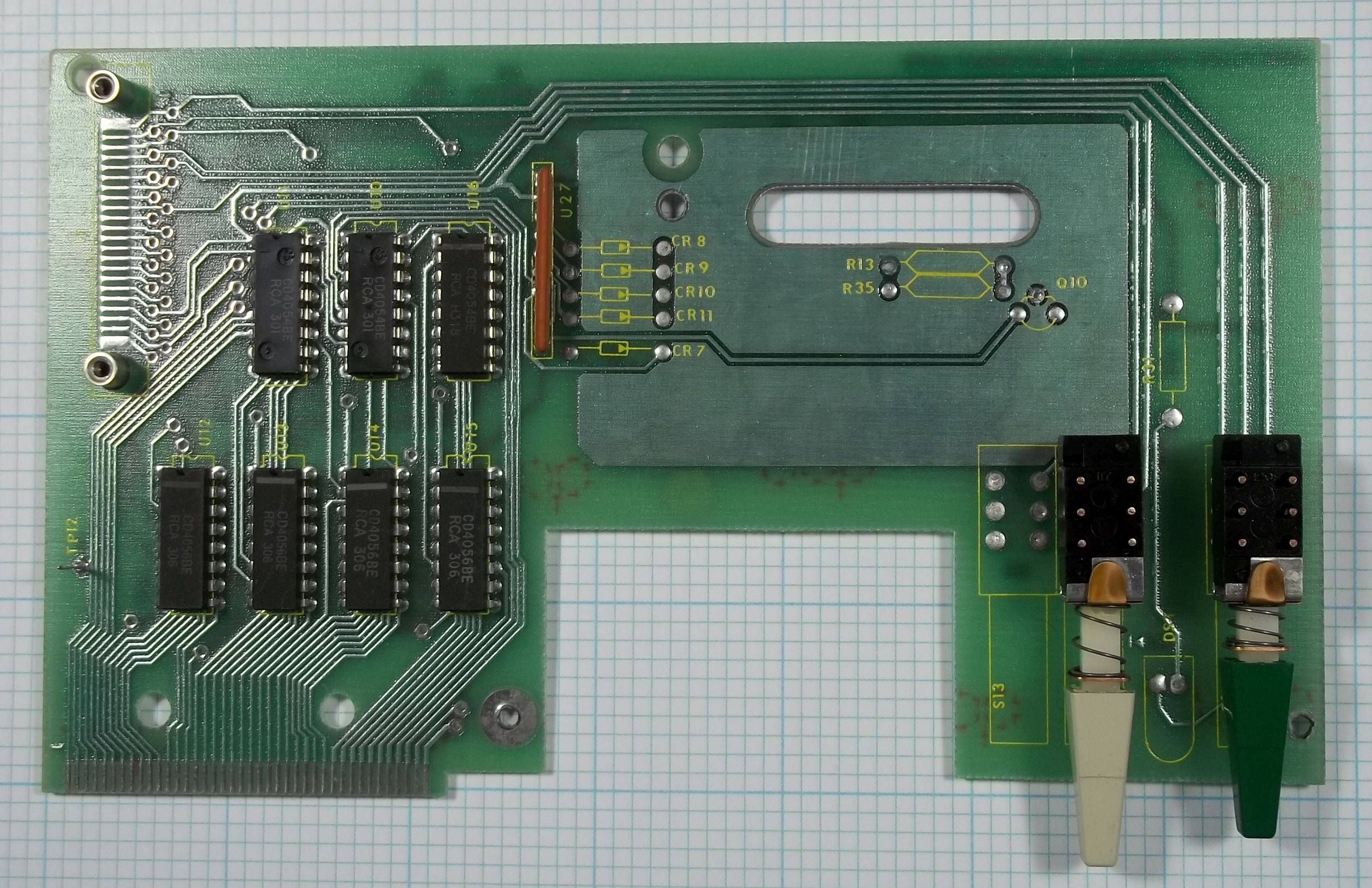 My thought is to replace this board in its entirety reusing only the switch caps and switches.
Use the flex jumper on the main board to jump to the new board.
Place an Arduino Nano on the display board and have it de-mux and re-mux the LEDs.

The refresh rate of the Fluke 8050A display latches is too low, about 500 ms to have it mux the LEDs directly.
The MK3870 CPU on the main board handles all of the conversion and math functions so its a busy machine.
The Nano needs to demux/decode the Fluke 8050A's ST0-ST4 strobe lines, WXYZ BCD data lines and DP/HP flags and then re-scan the LED outputs at a higher refresh rate.
The 8050's internal ground connection is the MK3870's Vcc. The 3807's ground is -5V. The Nano would also run with it's Vcc tied to instrument ground and Ground to -5V.
Logic "0" is -5V; logic "1" is 0V.

One cool thing that could be done with the Nano is to include an RTC and WifI connection.
One limitation of many low-cost USB or RS-232 instruments is that instrument ground is connected to USB ground.
The 8050's supply arrangement for the MPU also makes direct connection difficult.
Wifi permits truly floating measurements.

This is just an idea I'm kicking around.
There seems to be a huge supply of broken 8050s that just need displays.
A board that could just be popped into the old instrument and use the existing bezel would seem to be easy-to-replace and extend the life of a lot of meters.
I found one vendor who makes a custom LED assembly to replace a VFD in another Fluke meter but haven't seen anything for the 8050.
https://ka-electronics.com
Top

One of the concerns I have was could I fit the LEDs and board-to-board connector within the available space.

The other LED mods have been done on Veroboard and wired to the display pins.
Before I decided to go any further with the micro interface I wanted to tackle the display. 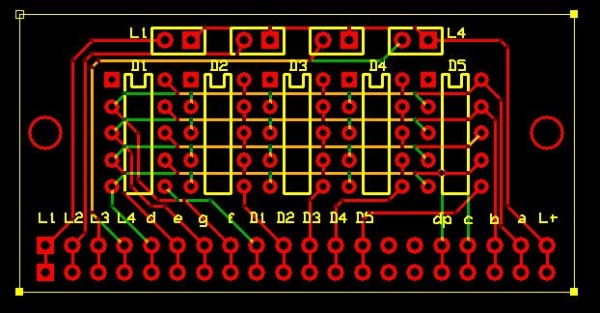 Fluke 8050A LED Board Layout 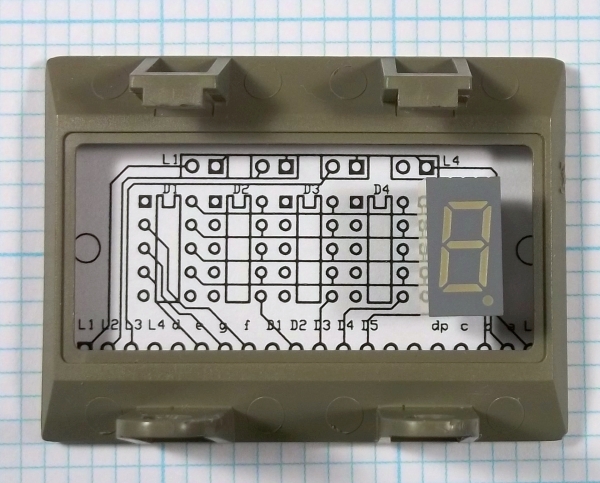 Fluke 8050A LED Board Layout Bezel

It all fits within the existing bezel which is shown reversed so it will lay flat.

I also did a layout for the flex connector termination to the PC board.

I still haven't decided if I'm going to replace the entire display driver board or use a mezzanine board.
The biggest problem with replacing the entire board is replacing the Relative and Power switch.
They are not standard F-series - the plunger is extended presumably to improve spacing for HV standoff from the front panel.

The next step is to look at the micro interface.
I need to find a way to economize the number of port pins on the Arduino Nano.
https://ka-electronics.com
Top

How about one of the many OLED displays out there? This ones discontinued but there are others: https://www.adafruit.com/product/931

This site has been useful, especially where he describes charlieplexing to save pin count. Other items might be useful too: http://www.technoblogy.com/show?Y8Y
My consulting site: www.ortelligent.com

I was trying to stay away from any kind of display that would age.
The OLEDs are beautiful.
I looked at the cuurent of a 2.7" diagonal and it was about 50 mA with 50% of the pixels illuminated at 100% brightness.

The Holtek HT16K33 looks perfect for muxed LEDs and there are Arduino carrier boards for it.
I'm hoping I have enough available supply current for whatever solution I come up with.

My totally defunct 8050A had a bad display and AC section.
I found an old LCD for my original 8050A I had swapped out in 1989 and installed it.
That LCD had also bled but was usable so I recapped it and fixed the noisy 4016 in the AC section.

When I use this unit for testing the micro interface I'll have a working display to compare to.
https://ka-electronics.com
Top

It might be time to stop collecting Fluke 8050As. 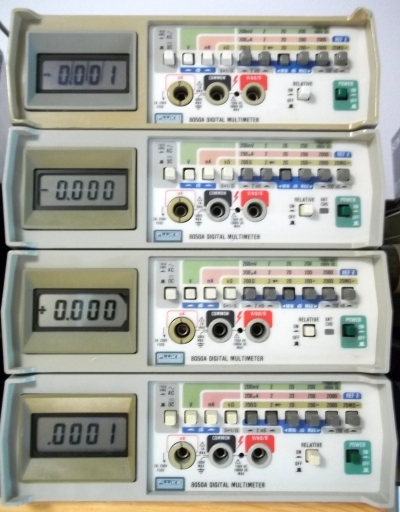 The Fluke 8050A "Tower of Measurement."
https://ka-electronics.com
Top

I found a way to reduce the port count so I could use an Arduino Nano to demux/remux the display.

The Fluke 8050A has 5 strobe lines ST0-ST4.
They are a 5 phase sequence used to strobe the display latches.
What I can do is use ST0 and then diode-OR ST1 through ST4.
This reduces 5 lines to 2 port pins.

The falling edge of ST0 is the active edge for that digit and some of the auxiliary display flags.
Once ST0 has sampled data the port connected to ST1+ST2+ST3+ST4 simply looks for edges and samples the data lines in sequence.
Once ST4 has occurred it waits for ST0.

The LED display needs a custom character set to provide "O" and "L" for "OL" on Ohms, voltage, conductance and current.
The 4056 had these characters but other BCD to 7 segment decoders typically don't.
I'll use 8 pins for 7 segments and the decimal point and provide the added characters in a table.

I admit the OLED looks attractive and I might just use one to troubleshoot the display demux code.
All I need for it is the I2C port.
Once I see the magic I may ditch the LEDs and use flyboy71's suggestion.

The bigger question is does the power supply, especially on the battery-operated ones, have enough current?

The OLED with backlight vs. 7 segment current requirements looks to be similar.
Is there enough current headroom for a Nano and the display?
On the line-powered Fluke 8050A there's lots of extra room for an outboard display supply where the 4 C cell NiCads went.
https://ka-electronics.com
Top

The OLEDs are nice, its more a matter of finding a reliable source unless its a one-off project.

This looks like a handy I2C LED display. According to the MAX7219 datasheet it can display "L" but I assume this board is wired to do so. Plus they have it in other colors.

I still like the idea of getting the display data out to the world with serial or WiFi or something. Most of my equipment is HP so I have it hooked up using GPIB and its nice to let something run and grab data.
My consulting site: www.ortelligent.com

If the existing Fluke inner bezel is ditched more display area becomes available and the mounting options expand.
The beauty of the OLEDs or LCDs and the simplicity of the I2C interface make them very attractive.
It's hard to figure out the current demands from Adafruit who list the datasheets for the driver and display but not the overall current of the carrier board, driver and display.

I'll look at that Maxim driver for LEDs.
It seems possible to make a main display board that could handle both.

I did a quick eBay search and probably more than half of the 8050As needed displays.

I'm coming to the conclusion that if data is going to taken from the instrument it needs to be air-gaped either by Wifi/Bluetooth or optically-coupled serial.

Going over the schematic you realize that the entire measurement system is floating at whatever potential the "-" lead finds itself at.
There is a 47MΩ resistor between safety ground and instrument ground.

If the 8050A were plugged into a 120V AC circuit to power it and it was measuring between two legs of a 480V circuit, instrument ground (and the processor's Vcc pin) are about 277V RMS above ground.
Measuring 2000V DC, the highest scale, it gets even more exciting.
At 2000V the leakage current between the "-" input and safety ground is still less than 5 µA.

I'm anticipating that even during debugging I'm going to have to be keenly aware the USB ground for the Nano is at -5V.
When I'm plugged into the USB port the "-" meter lead is -5V relative to safety ground through the host PC.
If I ground the "-" input I've shorted out the supply.
https://ka-electronics.com
Top 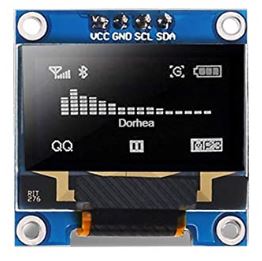 The specs say that the maximum power dissipation is 80 mW for 100% illumination and typically 40 mW which is 8 mA.
https://ka-electronics.com
Top

I forgot about the -5V supply. That complicates it a bit. I have used level translators before to handle comms to a device in some weird test system I had to design. I'm thinking it was just a transistor. Cant remember which circuit but here are some ideas. https://www.maximintegrated.com/en/desi ... /4414.html

I like the color display plus it can display a greeting every time you turn it on like "I miss you" or take on a life of its own "What are you doing Wayne?"