A resource for technical documentation. Datasheets, application notes, instruction manuals, books and links to resources are found in the Document Library.
Post Reply
3 posts • Page 1 of 1

This is a three transistor Moving Coil head amp published by Zetex in 1996.

The NPN ZTX851 and PNP ZTX951 would also work very well in this application.
Mouser stock both the ZTX689 and ZTX789 which have higher current gain.
I haven't built or measured this circuit to see if the ZTX689/789 have as low rbb' as the ZTX851/951. 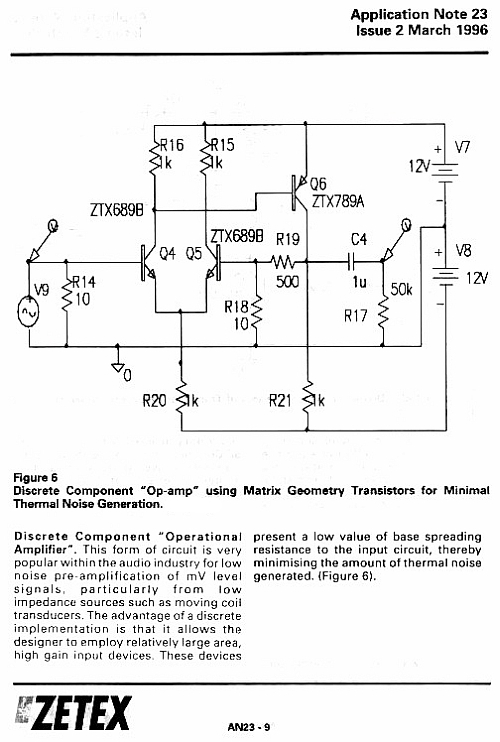 I just built this circuit with a +26dB flat post-amp to see how the ZTX689 and ZTX789 fare.
The total gain with the post amp measures 59.5 dB.
I'm having to deal with a lot of hum contamination but it looks to be in the 1 to 1.2 nV√Hz range based on looking at the noise floor between hum peaks and comparing it to the balanced MC preamp's noise under similar conditions and gain.

The ZTX851 in the same circuit measures about 3 dB lower noise.

The ZTX689 and ZTX789 have much higher gain however.
Apparently their rbb' is a little higher but their bias current would be 3-4 times lower than the ZTX851.

For direct comparison I should probably try the ZTX689 in the MC preamp.
https://ka-electronics.com

Made some measurements with less hum interference using the test circuit in the OP plus +26 dB gain post-amp.
Total gain is 59.5 dB measured.