A resource for technical documentation. Datasheets, application notes, instruction manuals, books and links to resources are found in the Document Library.
Post Reply
6 posts • Page 1 of 1

This is what I believe to be a rare die photo of an NE5534 published in EDN. I received this as a Signetics Reprint. 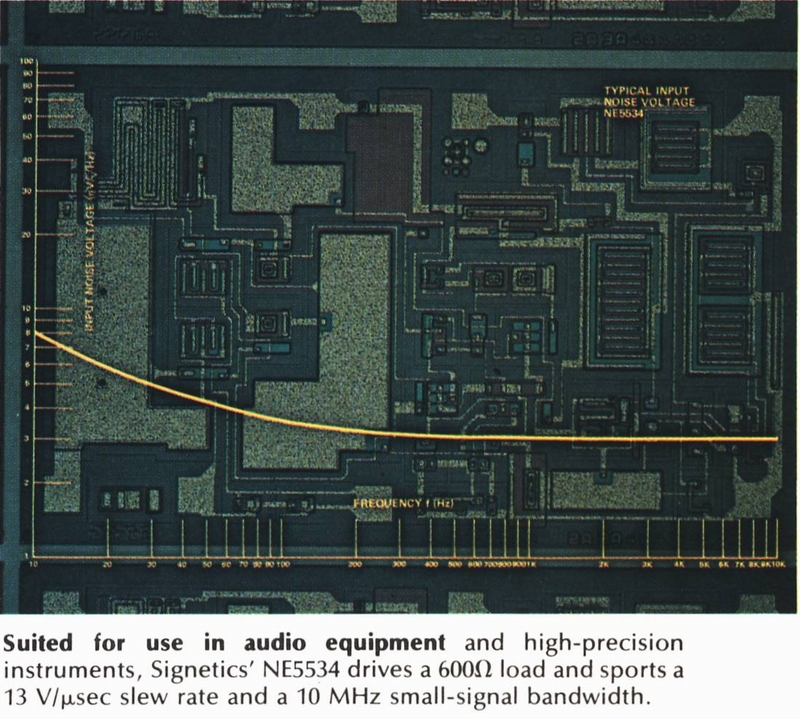 Checkout those big-ass capacitors.
Didn't realize they had found a way to put the input noise curve on the die. Very clever. 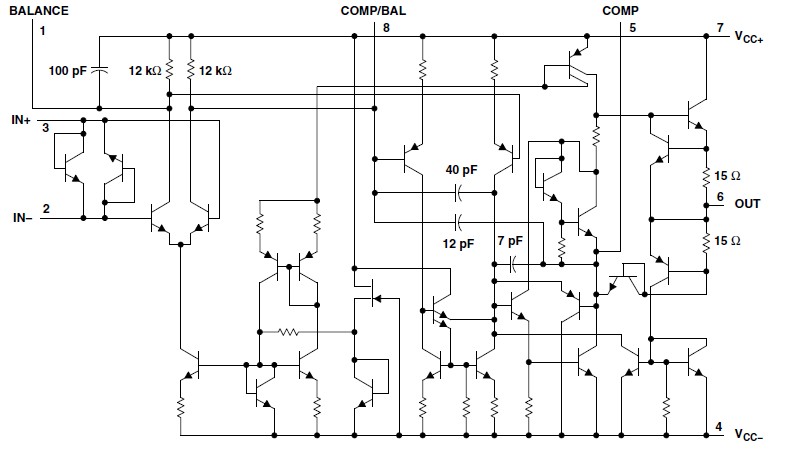 In a current EDN series "Analog Back to the Future" I found an interesting statement regarding the LM318 op amp and the trick used to get a 15 MHz op amp bandwidth in the 1970's:


Bob Dobkin, Linear Technology’s co-founder, vice president of engineering, and chief technology officer, spent his early design days at National Semiconductor, during which he moved op amps beyond the 1-MHz-bandwidth barrier with the LM318 (Figure 5). No fast PNP transistors then existed; there were only lateral NPNs (Editor - I think they meant PNP here) with 1-MHz bandwidth. Improvements in process technology helped, but the greatest speed gains often resulted from clever topological choices. Dobkin employed an architecture that split the input signal into a dc path through the lateral transistors and an ac path with feed forward capacitors that went around the PNP transistors for the 10- to 15-MHz bandwidth breakthrough.

This made me think: With only lateral PNPs available in the NE5532/NE5534 to the Mullard Designers (and perhaps Rupert Neve) how did they get the speed to make the 5534 suitable for audio?

I think they used Dobkin's LM318 split-path approach.
This may explain the 5534s internal workings.

Ignore the front-ends of the LM318 and 5534 which are completely different and look at the 2nd stage area around the PNPs.

This is the LM318 schematic:

It looks like C3? in the LM318 is providing the feed-forward path around the lateral PNPs.
Isn't that what the 40 pF capacitor is doing in the NE5534?

Both parts have the same "hook" in their open loop gain and phase response. 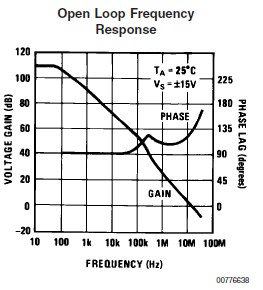 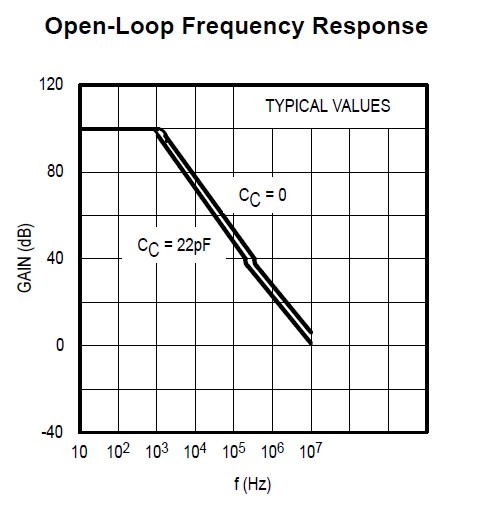 And one more thing. Am I the only one that has noticed the gorss error in the Philips and ON Semiconductor version of this part? 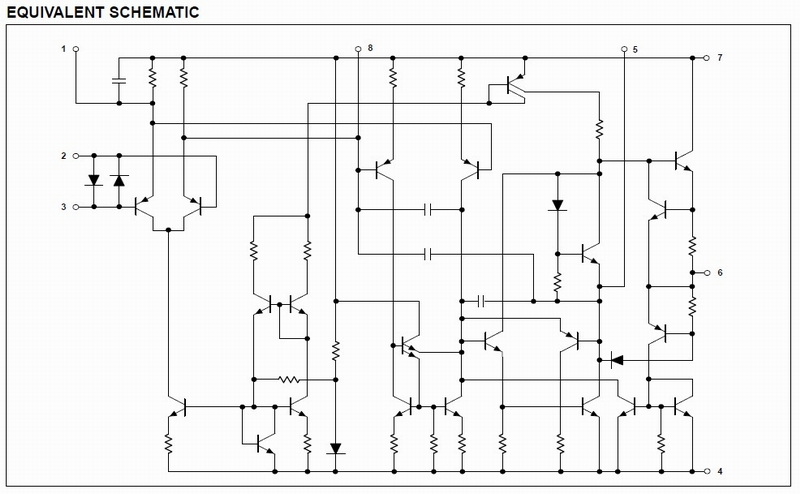 The inputs in an NE5534 ARE NOT PNP.
https://ka-electronics.com
Top

On Semiconductor, at my request, changed the NE5534 schematic which had the inputs shown as PNP with the "collector" loads tied to the emitters. It had been that way for years. 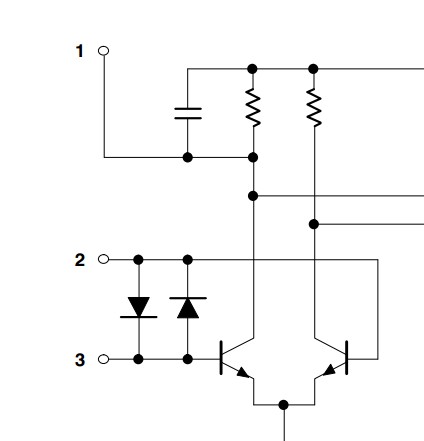 Compared to the internal drawings shown by TI, ON and others, this one has component values and what appears to be fewer errors.
An example is R13 which is shown correctly in the RC5532 drawing but not in the TI. 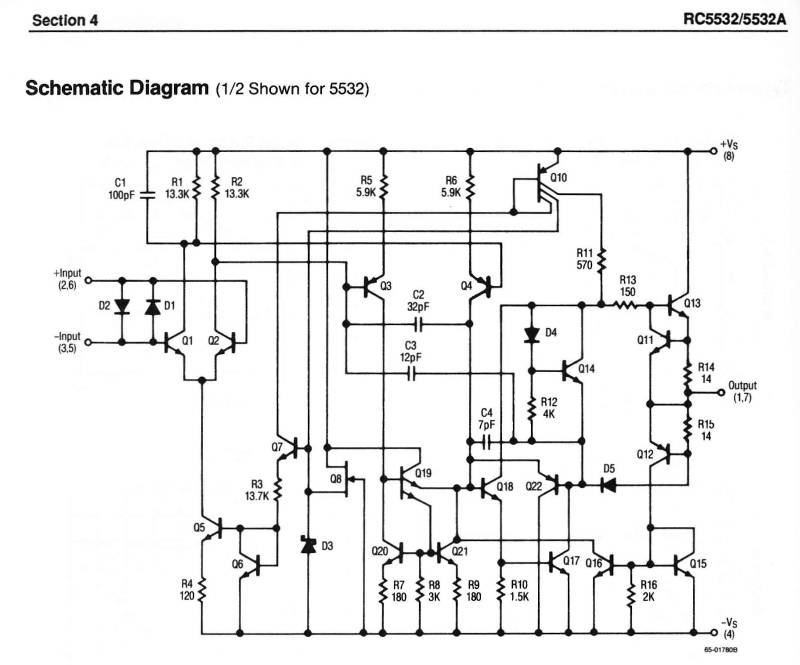 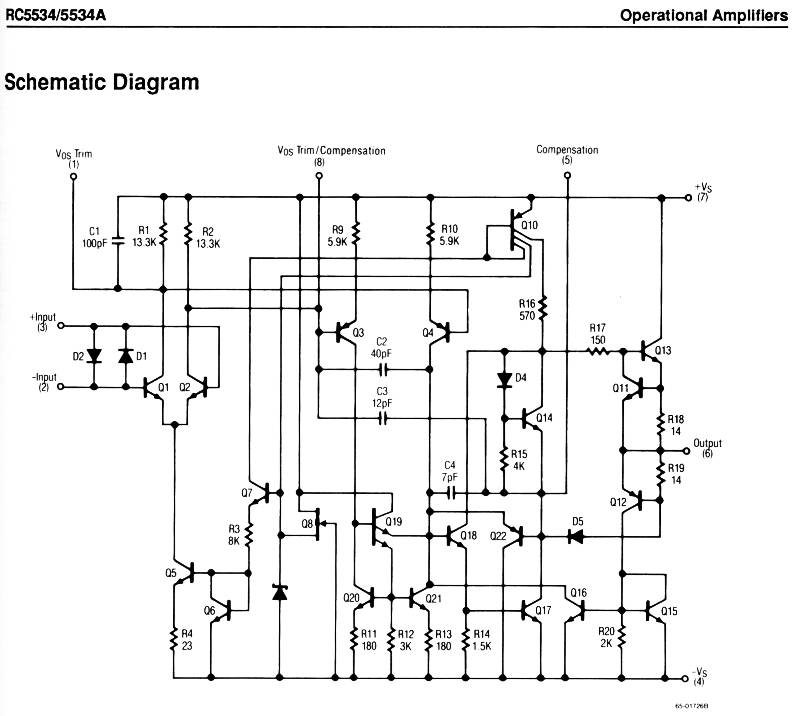 
1971 – Robert (Bob) Dobkin at National Semiconductor designs and releases the high-speed LM318 op-amp. Because of the limitations of typical planar processes, so-called ‘Lateral PNP’ transistors had extremely low gain and low bandwidth. The LM318 employed internal pF-sized capacitors which bypassed the slow PNP level shifters at high frequencies, and it could therefore slew at 70V/uS and remain stable. However, it did fail to settle with a first order response, featuring a bit of overshoot due to small ripples in the phase response. This is at a time when conventional op-amps like the LM301 and LM741 had 0.5V/uS slew rate - their terrible in-signal-path low-bandwidth, low-gain lateral PNPs meant the whole chip had to be markedly slowed down so as to not oscillate. The lateral PNP, originated in 1965’s uA709, was originally veto’d by Fairchild Semiconductor’s R&D department, but those concerns were dismissed by their own design guru Bob Wildar who felt that they possessed otherwise-unique-abilities in the overall design context. Bob was proven right when Lateral PNP’s were quickly and widely adopted as an industry standard using the “six-mask planar process” in standard IC op-amp fabrication.

(What is truly breathtaking to consider, however, is that even WITH the planar PNPs, in the signal path and not bypassed like in the 318, the 709’s unique-but hard-to-use frequency compensation scheme meant that the 709 could operate at high gains with a remarkably high slew rate. More on this in our History section which discusses the first PS Audio “PS-I” preamp of 1975.)

The Ampex 102 open-reel mixdown tape deck featured the 318 and reportedly sounded “cleaner” than many of its competitors. The Analog Devices improved version (the AD518) would be used as the final composite output amp of the 1975 Orban 8000A Optimod broadcast processor. Composite FM, i.e., the actual stereo multiplexed signal broadcast before it is unfolded back to two independent channels, requires flat frequency response to 53kHz, an otherwise tough feat for the slow general-purpose op-amps of the day. Harris would use 3 x LM318 in their MX-15 FM broadcast exciter of the 1980s.

Note that the TDA1034 of 1975, and largely similar NE5534 (a single NE5532) also feature capacitive bypassing of the slow PNPs to improve their internal frequency response, but they remain notably slower than the unique LM318. There is some evidence that the TDA1034 and later NE5534 is essentially an “improved” LM318 with design input from Rupert Neve, in the form of lower-noise front-end transistors, and slightly lower bandwidth still acceptable for audio. The 5534 shows improvement in one other less-well-known regard, and that is, a large percentage of LM318 production output has a slightly measurable “whistle” due to positive feedback and oscillation around the capacitive-bypass node of the DC lateral-PNP level shifter, which goes unnoticed in most applications.

Bob Donkin [sic] would go on to design the LM317 voltage regulator in 1976, and was one of the co-founders of semiconductor company Linear Technology in 1981. LT did, and still does, specialize in second-source upgraded versions of industry-standard semiconductors. Not surprisingly, his design notes for the LT-manufactured “LT318A” are some of the most instructive.