A place for software, hardware and DSP-based audio gizmos. All things code and the hardware that runs it. Time and amplitude are described in bits and pieces here. Links to interesting gizmos and software.
Post Reply
16 posts

excuse me... I was just sharing some of the thought effort I invested into making this as flexible as possible to justify the effort, that still is not justified (IMO).

WRT a WSM2812 RGB bargraph I'm less keen on using the serially-addressable WSM2812's since a failure in one pixel prevents data from being passed on downstream.
The original prototype clock has one intermittent at the 11th minute: When it fails the rest of the hour is hosed.
It occasionally comes back to life and eventually I'll change it.
They make 4 wire RGB pixels to avoid this.

Something like the CAT4016 for a longer bargraph seems better since the LEDs are in parallel and a single failure doesn't necessarily prevent it from working.
https://ka-electronics.com
Top

For my generic LED meter I hypothesized a basic meter board with one 16 LED driver that could be selected between a 2x8 or 1x16 meter. Multiple units for even more LEDs could be stacked by feeding the serial output of the LED latch to the input of the next one. A programming pin could select between linear/log scale and you could even use arbitrary non-standard voltage ranges (using the micro's several A/D inputs). This simple board could be very flexible covering 39xx applications and more with programming pins set high or low with jumpers. I figured for audio meters the LEDs should not be multiplexed to keep noise lower.

I stopped thinking about this project years ago when it was met with a collective yawn. (I gonged my own idea, not the first time).

Can we just get on with this already?

Show me the money. 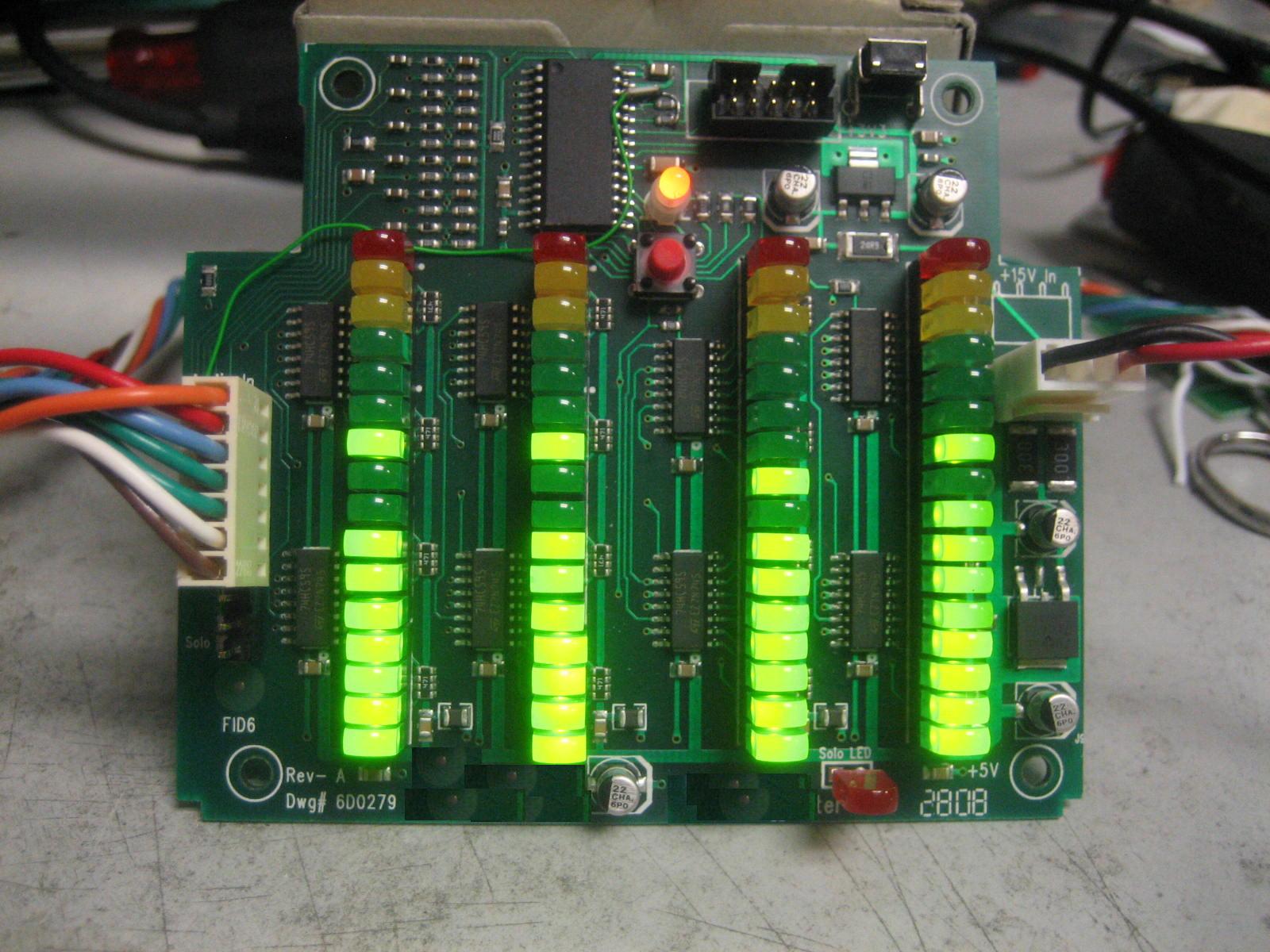 I ran this up the flag pole back in 2011 and didn't get enough salutes. As often happens I also got conflicting advice about what it needed to be.

My preference was 3.3V 16b family requiring an external latch LED driver. Some argued for 8B 5V micro that could drive LEDs directly. My first generation drum tuner used 8b 5V micro, and I promised myself to never write in 8 bit again.

1) Audio input for level metering
2) A dB/Volt mode for gain reduction
3) A 0-5V input or mode for electronic music.

Anything could be accommodated with external glue (to pad down voltages), and option pins for linear/dB. I even hypothesized using one of the spare A/D inputs to learn a fixed step size for linear or fixed ratio for dB meter steps.

You don't need to keep telling us you can do this. We know that already. Just do it and move on.

Just do what, which?

PS: The meter in the picture doesn't used the fancy latch driver but simple 5V digital logic shift registers. That is a prototype of meter still used in some APB consoles until recently. Their website says the consoles are not available with no replacement. I think cheap digital consoles ate their lunch.
Cancel the "cancel culture", do not support mob hatred.
Top

I ran this up the flag pole back in 2011 and didn't get enough salutes.


Their website says the consoles are not available with no replacement. I think cheap digital consoles ate their lunch.

I'm sure that was part of it. I also recall reading on their website after JP died that they had lost a fader manufacturer (for the short throw IIRC) and that they didn't at the time have the resources to re-tool.
https://ka-electronics.com
Top

I ran this up the flag pole back in 2011 and didn't get enough salutes.


Their website says the consoles are not available with no replacement. I think cheap digital consoles ate their lunch.

I'm sure that was part of it. I also recall reading on their website after JP died that they had lost a fader manufacturer (for the short throw IIRC) and that they didn't at the time have the resources to re-tool.

I was writing an answer but forum booted me off because I was taking too long (looking up data), so lost that more comprehensive answer.

OK short answer lm3914 still approved for new designs by TI (in PLCC package) as of Jan 2019. others not so much but available from chinese sellers in small quantity.

I found a microcontroller from microchip in 5V technology that drives 8-12mA directly and supports 16b code, with 10-12b A/D. Not super cheap $3.50 in onseys. It has open collector capability but I am scared to go back to reading the data sheet for more details or I may lose this post too...

wrt JP (RIP) I still miss talking to him about console design, I vaguely recall him talking about a fader problem while he was still around. I communicated with Chuck (the A) when JP died and he is living on Hawaii, Taz (the B) has been working at a different console company for years. I doubt they have a new JP, or ever will. The guy who owns the company now is their old contract manufacturer so not a design guy.

JP was a rock solid analog engineer and willing to dip his toe in digital, but unfortunately too little too late. Chuck was pretty good at market research and product definition but apparently misread this digital tide.

WRT the meter board people will want something that is horizontal and will fit in a 1U height rack.
https://ka-electronics.com
Top
Post Reply
16 posts