The difference between a "conspiracy theorist" and a truth-teller is about one year.

Where we discuss new analog design ideas for Pro Audio and modern spins on vintage ones.
Post Reply
4 posts • Page 1 of 1 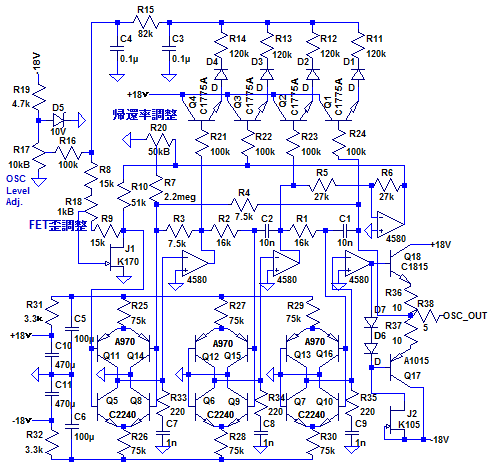 The gain extension trick he used to obtain a "170 dB gain" op, to lower the oscillator's distortion, was so simple I had to try it.

You may recall that JR used a common base stage in the Loftec TS-1 at the output of the rectifier op amp to increase the open loop voltage gain. https://www.proaudiodesignforum.com/for ... ?f=6&t=856

I decided to try the following closed loop test circuit using THAT340s for DC matching. The typical current gain is about 100 so the DUT might be able to get about 140-160 dB gain vs. Flip Flop World's 170 dB. 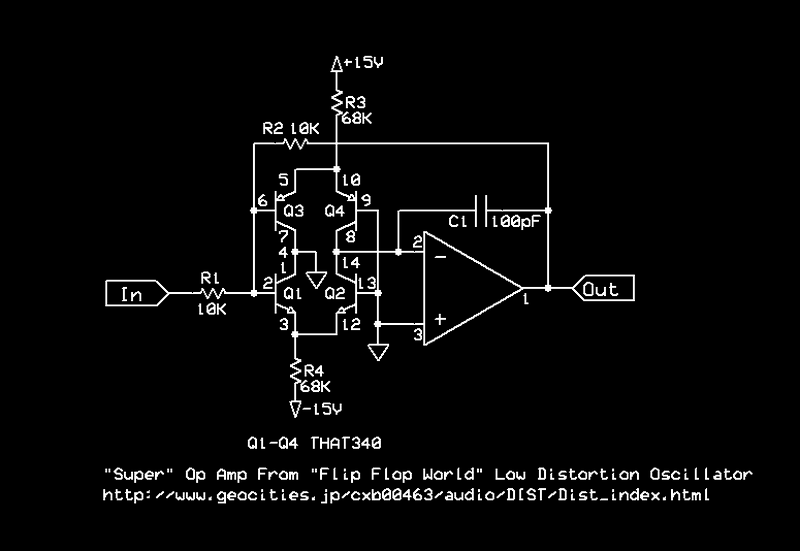 The reduction in HF THD above 2 kHz was significant with just about every op amp I tried owing to the extension in open loop gain. 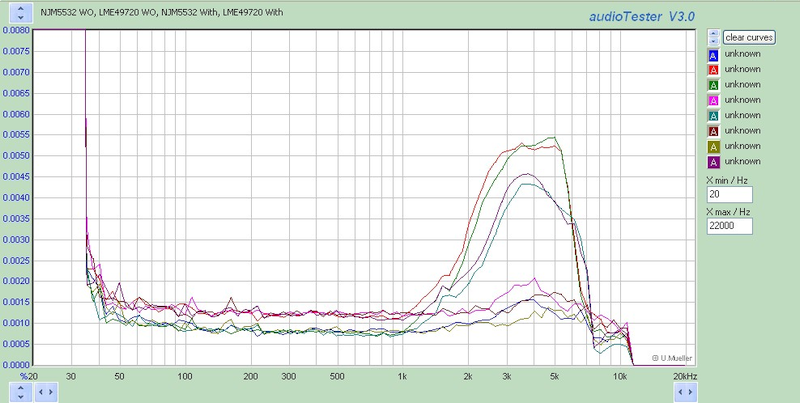 The top curve families are the NJM5532 and LME49720 op amp "B" sections without gain-assist transistors. The bottom curve family are the assisted op amp "A" sections. The bottom curves follow the loop-back residual below 1 kHz so the actual distortion differences are masked. The left and right channels of the analyzer also have a small difference in residual THD. The op amps are fairly heavily loaded: The load, not shown, is the approximate 560Ω input impedance of the A/D.

The LME49720 is about the only un-assisted op amp that can be used in Victor's sub-PPM oscilator due to its 140 dB (DC) open loop gain.

The object of course is not to turn a 35 cent op amp into a $3 op amp using a $5 transistor array. The performance however is good enough to try it in the Super Low Distortion Oscillator: https://www.proaudiodesignforum.com/for ... ?f=6&t=887
https://ka-electronics.com

For the record I did not invent the concept of adding a gain stage inside the feedback loop of an op amp, I'd seen it done somewhere and added it to my tool kit along the way to use later...

Not sure what to make of that hybrid "helped" op amp.

A simple LTP has something like 40 dB of voltage gain. Stacking them up like that should double the transconductance for 46dB (?). The NF topology attenuates the NFB 6dB so still +40dB more open loop than stock.

That should make it unstable as hell but the 100pF feedback cap rolls off the open loop gain at some point. Might be interesting to see what open loop transfer function looks like, but that might be difficult to measure.

I wonder if there are any slew rate limitations due to need to charge the 100pF cap? Probably doesn't take much current (I could do the math but am lazy).

Thanks John. The real test I suppose is how well it performs in the oscillator and stacks up against the LME49720.

Another poster at DIY Audio has discovered the LME49720s EMI resonance at US DECT cordless phone frequencies. I wished they would fix that and the process problems causing noise.

Just like the compensation cap in typical op amps dominant pole compensation the cap must be charged and discharged to wiggle the output... may show up as distortion at very HF as the input LTP is driven less linear. May not matter as your results appear to show.