That's good enough for all but the most pathological cartridges out there, and I doubt you'll find many Nagatron ribbon cartridge users on here.

Any idea on rough board size yet. I need to leave space. Tonight I was stymied by a simple allen key. The donor case front panel has imperial allen head bolts. As i don't need them often I only have one set, and the key I need was put somewhere safe the last time I took it off. Phooey.
Top

Bill - I'm hoping to keep it the same board size as the MM preamp which is 3x4".

Here are some noise measurements with the Protoboard moved off the workbench about a foot and the hum component from a nearby 100W linear supply's hum "vortex" nulled. I can't turn that supply off - it powers the PCM4222EVM used to make the measurement. So for the time being I null it by rotating the Protoboard. The hum signature looks similar when the MC preamp is powered from a pair of 12V batteries. 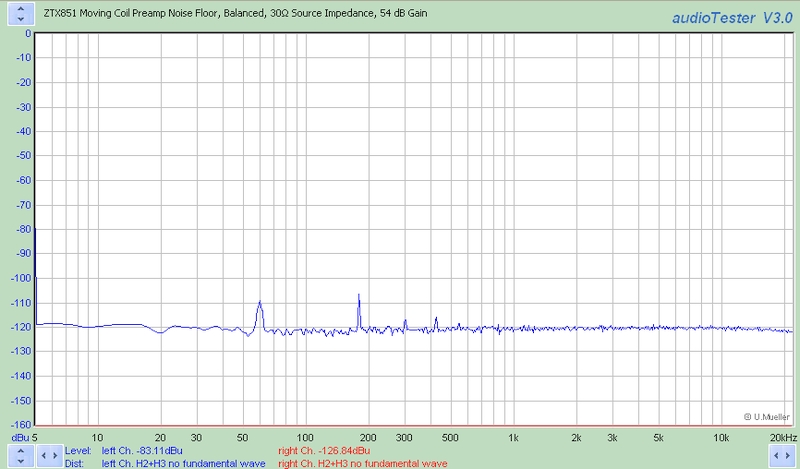 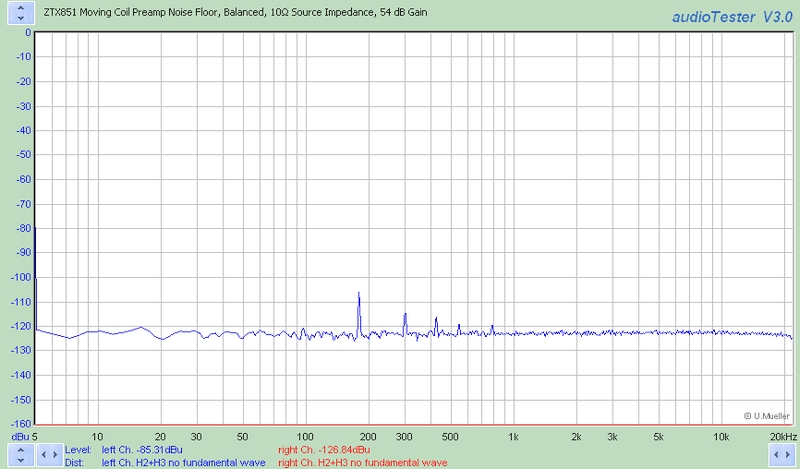 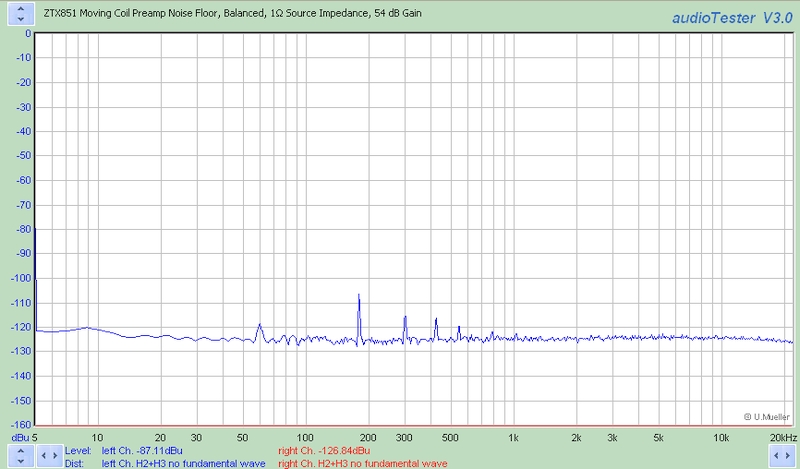 That's actually a good question and one I sought the answer to.

It turns out that the orientation of the loop area of my test resistors changed relative to the magnetic hum field (or interacted differently with other loops) as I swapped them. After I changed input resistors and stuff moved a little bit on the Protoboard around the input I re-nulled the mechanical orientation. I only had to change the angle by a few degrees to find null and the harmonic signature of each is slightly different. I wasn't really sure I could move the power transformer much farther away due to lead length.

The Protoboard was clamped vertically in a bench vise sitting on a stool because that was quietest and that allowed me to play with angles. I'll post a pic. It's very ugly.

After making all these measurements I pulled out my trusty hum sniffer rig which is a Radio Shack suction-cup telephone recording pickup plugged into an LM386-based 277-1008C "Mini Amp-Speaker." Sure enough the magnetic hum hot spot was the huge E-I lamination power transformer in the linear supply. A hum "vortex." The hum sniffer's null was about the same angle as the Protoboard's...

The last time I used this rig was to find a "lost" sprinkler valve solenoid vault. I went through the yard looking for hum when that zone was on. I should do a post on hum-sniffing. It's amazing the amount of current you find flowing in commercial building structural steel. In the era of large format analog consoles and magnetic recording it was a valuable tool.
https://ka-electronics.com

Ah good, plenty of space for that.

Still astounded at the performance for a protoboard setup.
Top

Having '70s "vintage" metal base, grounded Protoboards makes a huge difference.
The plastic based ones are unusuable and the later metal ones don't ground the baseplate to the black binding post.
I should probably do a thread on how to modify modern ones.

I found a simple bias current-reduction trick that was used in the AP System 1 that I may implement here. (*)

With a typical ZTX851 pair the bias current, Ib is about 30 µA and the offset current less than 1 µA.
A differentially-connected cart, which is a floating connection, only sees the 1 µA Ios.

Ib however floats each input down to about -15 mV with a typical input pair. (30µA * 499Ω.)
In some minds this might limit using the preamp with unbalanced input connections.
Connecting the cart unbalanced misses the whole point but that doesn't prevent someone from wanting to.

The leakage current of an electrolytic coupling capacitor could easily exceed the Ib seen here for several minutes but that's another story.
Lowering the bias current, if it can be done without a noise penalty or more devices seems worthwhile.

The +15 mV is derived from the low noise +11V shunt regulator, is attenuated by more than 50 dB and then appears in common mode.
It's not a differential noise source.

I tried it.
With my super-good ZTX851 pair having low Vos and Ios I got Ib to around 1µA.
In the sloppy pair with an approx 1 mV Vos and 3µA Ios Ib was lowered to about 5µA.

This is not bias current cancellation its more like bias current assistance.
For the price of two resistors I think its worth it.

Without thinking too hard, is there some way to servo that for good match?

I don't see a small bias current as a worry, but I know some people get perturbed.
Top

One other question I forgot to ask. Have you got any plans to try a configuration with the ZTX951. I realise it's t**d polishing to worry about any lower noise than you already have but the PNP is around 30% lower Rbb for no extra cost.
Top

Trying the PNP had occurred to me.
I have about 100.
All you have to do is turn a few things upside down.
That's the magic of a Protoboard.

I guess my only thought is if Zetex were to discontinue parts in the E-Line the PNP devices might be the first to go.
If automotive high-side switching was the big market for them PNP would still have volume.
If fluorescent ballasts for emergency lights drove PNP sales they might drop them.

That's why I stuck with the NPN rather than push the envelope further.
But hey: Now would be a good time to try.
https://ka-electronics.com

CDC: "For 6% of the deaths, COVID-19 was the only cause mentioned. For deaths with conditions or causes in addition to COVID-19, on average, there were 2.6 additional conditions or causes per death." https://www.cdc.gov/nchs/nvss/vsrr/covi ... /index.htm
Top
Post Reply
499 posts