Where we discuss new analog design ideas for Pro Audio and modern spins on vintage ones.
Post Reply
14 posts

The author looks at the common mode distortion vs. source impedance performance of a TL072 and compares it to the dielectrically-isolated OPA1642. 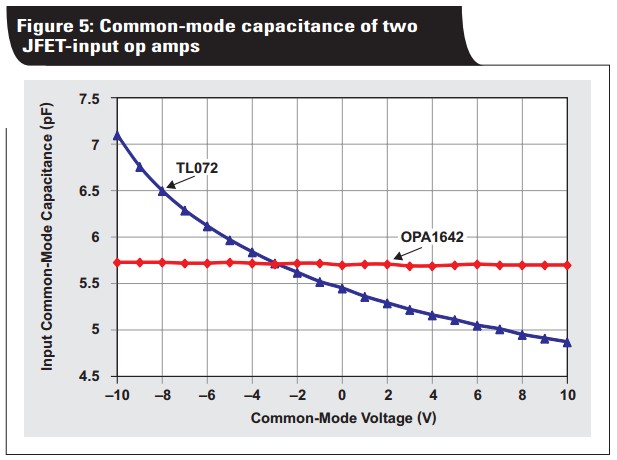 I had some private discussions with Sam about a related mechanism related to source impedance (distortion).

The modern uber-op amps are so low distortion that they can't measure the distortion directly. Instead they run them at an elevated noise gain then impute a distortion based on that measurement divided by the noise gain. I do not question the approach but note that operating the op amp at elevated gain typically involves a low impedance feedback network connected to - input.

Going into the wayback machine (my memory) I seem to recall an old phono preamp from APT (Tomlinson Holman?) that used a hybrid LTP consisting of one JFET on the + input side and a low noise bipolar on the - input feedback network side. Back then we did not have the nice low noise JFETs like we do now.

If I were designing an opamp, knowing it would be measured a certain way (like at 100x) I would be tempted to optimize it for that.

Not sure if this has been mentioned before as I am new here, however given the nature of the subject matter it is possible that it is not in current memory.

There is an interesting issue addressed in the AD743 data sheet at the start of page 10 and dealt with in more detail on page 11 "BALANCING SOURCE IMPEDANCES".

It deals with how mismatched impedances at the inputs of an op-amp degrade the dynamic performance and mentions distortion proportional to the CV characteristics of the IP stage.

I tried this compensation scheme on some linear phase GIC filters in an audio DAC and the results were quite impressive.
Top

Hey Craig thank you for joining us!

I've seen that in a number of Analog Devices datasheets (both BIFET and bipolar) and have tried it myself with OPA2604s and AD823s.
It does seem to work.
https://ka-electronics.com

That is an interesting phenomenon and along the lines of my questions about how modern uber op amps are characterized for distortion with such high noise gain. While I would ASSume an op amp running at very high gain to extrapolate test results would have dramatically different impedance at + and - input ports (at least it would in any practical NI gain stage.

The concept of balancing DCR to maintain good DC behavior is well known and pretty obvious, balancing AC impedance sounds logical, but IIRC when I asked Sam who had done extensive testing with many op amps he was not aware of any such association.

So many modern design topologies deal with imbalanced impedances at op amp inputs. The classic instrumentation amp for example, while this suggests benefit from matching the feedback network impedance to the source impedance. FWIW they show a piezo preamp running 40dB of gain with an extra 10^8 resistor added in series with the - input. I don't know too many low noise designers who would embrace that extra source of noise before the 100x voltage gain.

The difficulty in measuring this stuff empirically is that modern op amps are too good to make direct measurement, so they must be gamed with elevated noise gain. I wonder if the AD743 is an outlier with unusually high source impedance sensitivity, or just an honest data sheet?

I'm not sure where but Jung writes about this as well.
https://ka-electronics.com

Out of historical interest I seem to remember first seeing that compensation scheme in an early National Semiconductor application note or data sheet. When I went searching for it I couldn't find it but found the AD information instead.

I found another place where Jung discusses source impedance balancing for voltage followers to reduce THD in the ADI 2002 Analog Seminar series. 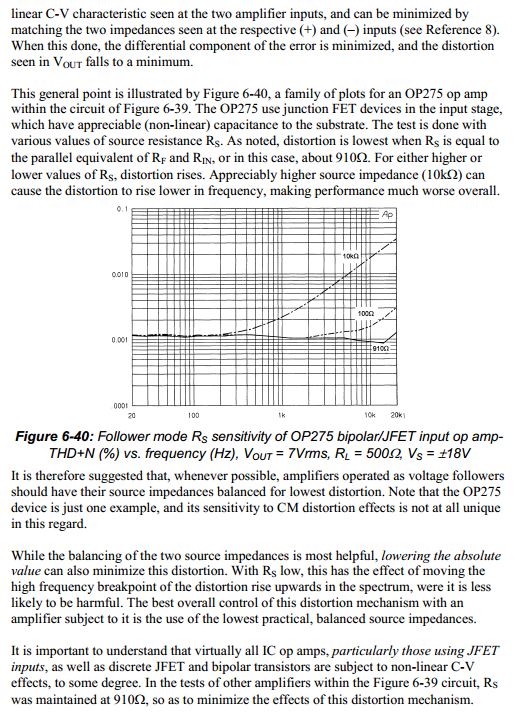 This is understandable. I have intuitively preferred inverting topologies albeit for other reasons. There are multiple distortion mechanisms associated with input pair operating point.

Jung say's this is caused by a non-linear capacitance to substrate, but even discrete JFET and bipolar op amps are subject to this... I'd like to have a handle on how universal this fault really is.

This begs the question of optimizing instrumentation amp topologies where + and - impedances are often unbalanced, with source impedance loading the + input often unknown.

I have generally gravitated to the two op amp balanced input that seems free of this distortion, and now popular chip sets (like from THAT) should also be clean. I suspect they are or we would have heard by now from bench testing.

I am not surprised that the old TL-07x were poster boys for this distortion mechanism they were early days JFETs (I could have used this info a few decades ago when I used them a lot).

Maybe that's the reason for R8 here with a bipolar input NJM4580: 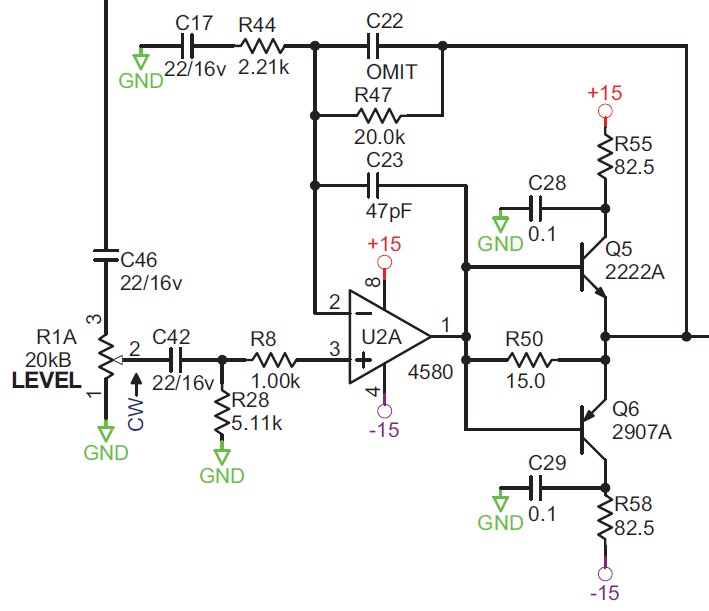 I also went back and looked at some tests I did comparing the FET-input OPA2604 and the AD823 as followers.
Not being blessed with an AP and with limited soundcard options at the time I used a 100 kHz test frequency hoping that would translate to results in the audio bandwidth:


I've run some high level 100 KHz tests to see if I can sort out some additional differences between the OPA2604 and AD823. I chose such a high frequency since my measurement fundamental with RMAA is limited to ~6 KHz. As Douglas Self points out on his site, the OPA2604 has rising HF distortion. I wanted to see if it was even more pronounced at 100K where I could see it.

Since I'm working at 100 KHz my choice of equipment becomes a highly-modified Heath IG-18 as generator and HP-334A as analyzer. At this frequency the generator residual is about 0.06%. Not great but as it turns out adequate.

The power supply rails were chosen to be +/- 18V with a 10V P-P output. The stages are followers with 1K "balancing resistors" of Rin and Rfb. The output is loaded in a high impedance with a 100R build-out.

The AD823 was at the generator residual so it's THD contribution was immeasurable and below 0.07% at 100 KHz 10V P-P. As to the balancing resistor values I could not see much difference at 10V P-P. At 30V P-P, there was a very slight increase over generator residual. At this level, the AD823 had a slight edge using a 1K Rfb. It really didn't care either way what Rin was.

So we have at least three cases.
We don't know why R8 exists but Bohn's recollection was that it had something to do with the transition from through-hole to SMT. It may have reduced THD or just improved stability.
An added 1K Rin appears to benefit the OPA2604 but not an added Rfb. (At least at bat frequencies.)
An added 1K Rin or Rfb does not significantly benefit the AD823. (Though an added Rin does prevent polarity reversal if Vin >300mV than Vcc.)
Seems like that its always worth looking at whether the OA is FET or bipolar.
https://ka-electronics.com