Where we discuss new analog design ideas for Pro Audio and modern spins on vintage ones.
Post Reply
55 posts

I had a chance to revisit the subject of elliptical equalizers to provide low frequency crossover to mono for vinyl mastering, improved ear-bud/headphone listening and improved small-speaker and subwoofer performance.

My working theory is that the steering of side information to the opposing channel used in the original Neumann VAB-84 is superior to the subtractive method used in the EE-70, EE-77 and simple L+R methods to derive Mono at low frequencies.

The original VAB-84 had a sliding -6dB/Octave filter. In its original application, Direct Metal Mastering, the sliding filter made sense.
It was discovered however that the steering technology used in the VAB-84 permits higher-order filters making a sliding filter unnecessary.
The "EE-84" (my shorthand for a VAB-84 elliptical equalizer) uses a fixed frequency filter with either 12 or 18 dB per octave slope.

This a crosstalk comparison curve showing a "subtractive" EE-70 (emulated) -6dB response versus a -12dB and -18dB per octave filters in a "steering" "EE-84" (VAB-84 but higher-order) configuration. 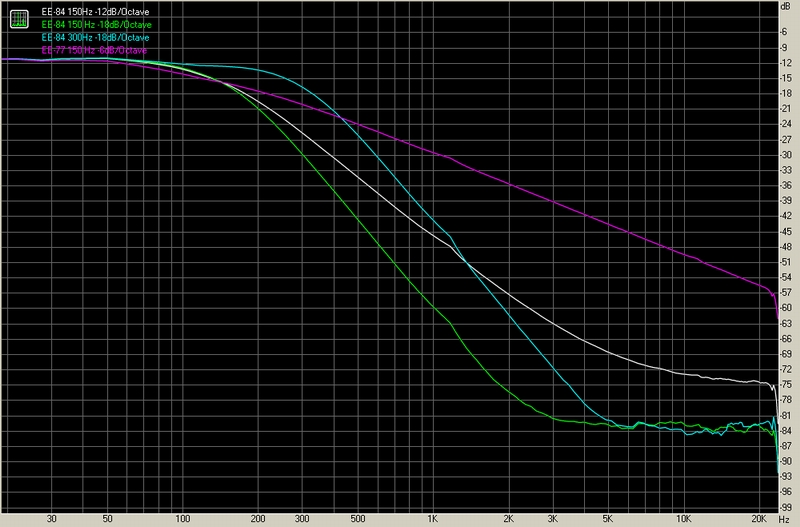 The higher filter orders of the "EE-84" do not compromise mid range imaging and sound far more transparent than does the EE-77.
https://ka-electronics.com

It makes sense to me the higher order filter would be better in this application. Good post.
Best,

I'm starting to think that 150 or 300 Hz both -18dB/octave would be about all the choices one would need.
https://ka-electronics.com

I think this is the same test you sent me sound files from, Wayne. I found the EE77 more effective at controlling vertical modulation on the lathe than the VAB84 approach. From the graph it looks like there is 2dB or so more attenuation around 40Hz or so. I think this accounts for it. If the steeper filters could have the same or more attenuation around 40Hz it would beat the EE77 both in sound and function.
Top

Thanks for posting.
Those latest curves used a slightly different test fixture for both approaches.
I went back and looked and the "VAB-84" example sound files were using the -12dB/octave test circuit.

I think there is also a slight LF response error in the previous EE-77 curve at LF since the "EE-77" has a slight LF rolloff (an insertion loss) in addition to the blending. I didn't gain match those too closely either.
The VAB-version was DC-coupled throughout in the test giving it more overall low-end.
That may be the 2 dB or so difference you see at 40 Hz.

I agree thinking that -18dB/octave is the way to go for the VAB-84 emulator because it carves out more vertical at LF then gets out of the way faster in the transition to the mid range. With the steeper slope the cross-over frequency can be moved higher to carve out a bigger swath of vertical information.
https://ka-electronics.com

Paul, great to hear your experienced comments on this.
Best,

Paul - Thanks again for the comments. They caused me to look at something in a different way and learn even more.

I built a 300 Hz EE-77 (0.33uF per channel with a 3K3 shunt) and compared the "EE-84" 300 Hz -18dB octave to it this time looking at the vertical (difference) component rather than just the crosstalk curves. I learned some very significant things:

To have the same level of vertical component at a given frequency of 40 Hz it appears the EE-84 (with an 18dB/octave filter) has to be set for a cutoff an octave higher than the EE-77.

Despite the EE-84 requiring it's cutoff to be set an octave higher to maintain the same vertical modulation as the EE-77 it still has better crosstalk performance due to its steeper filter.

At 2 Khz the EE-84 has 16 dB better crosstalk performance than the EE-77 despite it being set an octave higher.
I now understand why Neumann chose to have the filter move all the way to 1 kHz.
With that filter being only 6 dB/octave moving it lower dynamically gets it out of the midrange.
FWIW the EE-77 also has a fair amount of insertion loss extending well into the midrange.
At 1 kHz its about 0.5dB.


If the steeper filters could have the same or more attenuation around 40Hz it would beat the EE77 both in sound and function.

I think your assessment was right on the money Paul.

Despite having a cutoff frequency twice as high, the EE-84 has about 14 dB more separation at 2 kHz than the EE-77.

But does the EE-84 reduce vertical modulation to the same degree as the EE-77?

Well, yes but with a small penalty.
The amplitude differences for the EE-77 and EE-84 lateral curves are not level calibrated that well: The shapes tell the story. 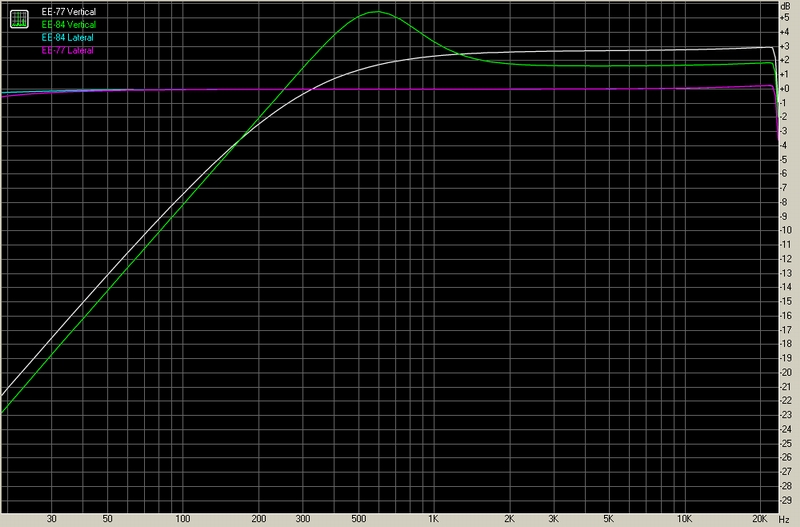 Though the vertical response of the EE-84 has an approximate 3 dB peak at the cutoff, its skirt and stop band response follows that of the EE-77 closely.
Note that the EE-84 lateral (mono) response does not have the hump.
The filter is a rough approximation to a Butterworth alignement.
(I did a Bessel filter and the hump is reduced but the skirt isn't particularly steep.)
Whether this peaking for hard-panned low frequency inputs really increases vertical energy enough to reduce "cutability" remains to be seen.

The response peaking at crossover with hard-panned low frequency inputs has some interesting properties:

When both channels are driven equally (lateral or mono) the response is as flat as the sound card: 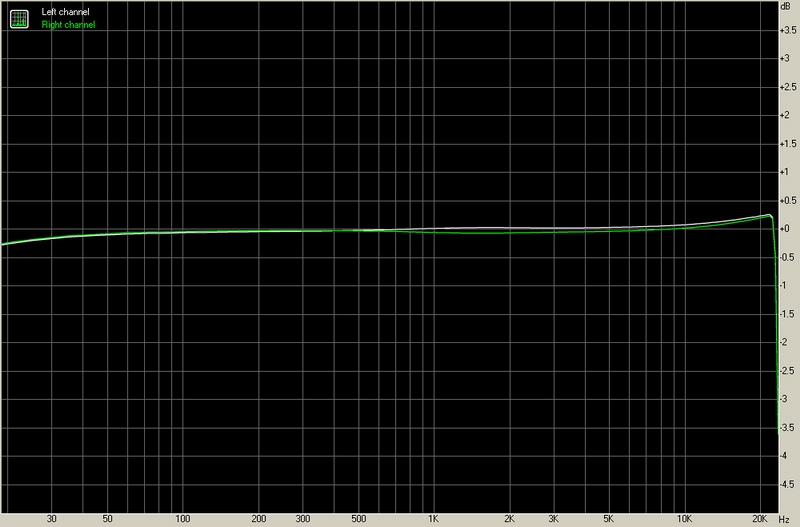 Frequency Response of EE-84 With Both Channels Driven. 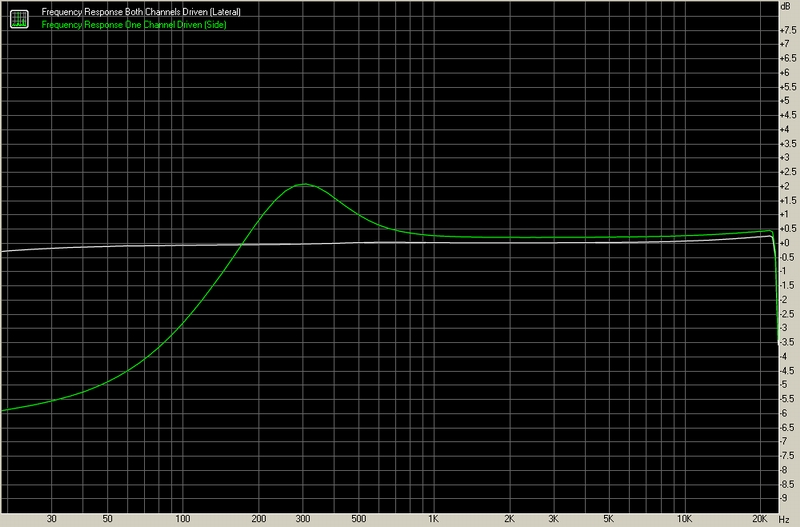 Crosstalk/Frequency Response of Both Channel Outputs with Only the Left Input Driven.
The curves converge below 600 Hz indicating crossover from vertical to lateral. 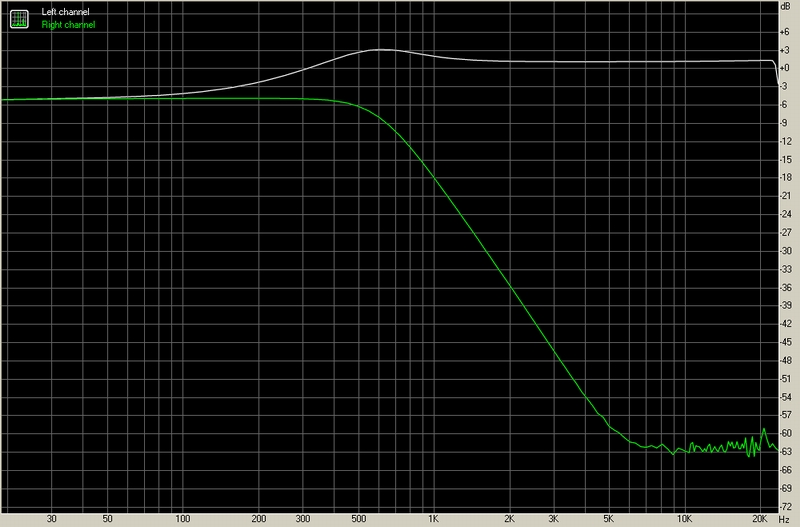 Frequency Response of EE-84 Left Output vs. Right Output With Only The Left Input Driven.

(1) With both channels driven simultaneously (mono) there is no peaking..
(2) With only one channel driven the magnitude of the vertical peaking (about 3 dB) is split between channels to become a 1.5 dB peak for hard-panned elements.

The peaking only appears in the output at 1/2 the amount and only for LF inputs that are hard-panned.
As the hard-panned element is moved to the center, the vertical hump becomes less.
Mono elements are not affected..

Given the hump's location of 600 Hz, the modest amount of RIAA playback EQ boost at that frequency, and the fact it occurs for hard-panned elements it may not impact cutting as much as it might appear. 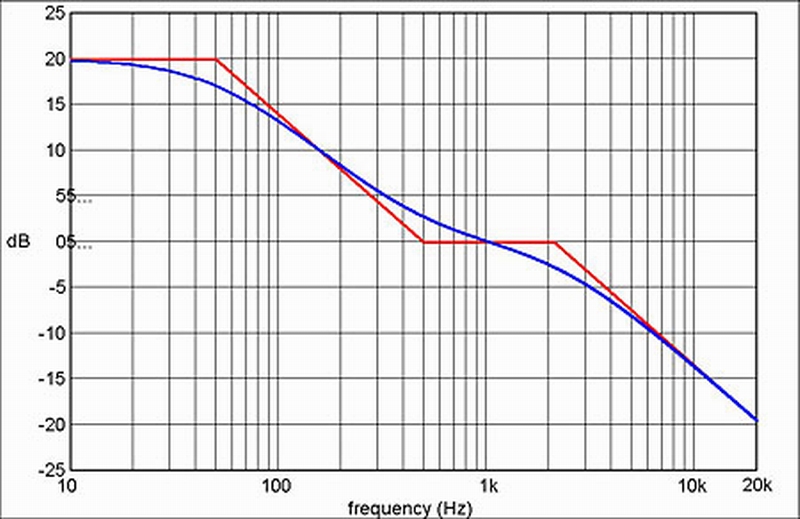 With a lower 300 Hz crossover to lateral, the RIAA playback EQ boost is still only about 5 dB.

What the differing EE techniques appear to offer are choices of subtractive or steering side information and for higher-order filters what parameter, vertical or crosstalk, receives the benefit of the steeper filter.

I do realize that there are other modern Elliptical Equalizers out there but I've yet to find one that has greater than a 6 dB per octave slope.
https://ka-electronics.com

Wow Wayne, that's fantastic work. I need to look at the post a few more times to grasp it. It's a bit of a brain teaser.
Top

I'm working on the "hump" right now and think I can get it to about a dB by simple tweaking of the filter alignment.
Yesterday should have been hump day.

I missed this thread completely

I've done a lot of stuff on shaping M & S to get better sound from speakers.

Some of it was straightforward (?!!) monoeing at LF to get more boom for your buck from small subs to big PA speakers up to 1000W rating. Loadsa non-linear processing

I called this Powered Integrated Super Sub technology but for some reason, Marketing never liked the phrase.

The other side was getting better stereo from speakers at the usual +/- 30 degrees. The processing for this isn't obvious. eg you need to reduce width at HF and increase width at LF. I've been accused of designing the biggest and most expensive set of headphones in the world, a powered dipole speaker at 6000 GBP.

There was provision in the Dirty Tricks Electronic Box to mono extreme LF to deal with record warps. (This was early 80's when vinyl was still an important source).
_______________

Wayne, there IS a real life sound source that has a globular vectorscope display. If you record Blumlein with fig-8s at 90 in a good hall, the reverb die away should be completely globular. Its one of the things you can use to assess recording venues and mike positions for Dead White Men's Music.
_______________

Enough of me wanking. I really wanted to ask if yus guys use a hardware vectorscope (eg an oscilloscope connected X/Y) or is there a free Vectorscope VST plugin that this beach bum could afford.
Top
Post Reply
55 posts