I found a really cool, retro signal injector in my Father's toolbox as I was cleaning the garage.
Until the last month or so most of his tools were the way he had left them back in the late 1990s.

I learned from Philip Colston at the Antique Radio Forums that it's an Eico PSI-1. Mine wasn't lettered. http://www.antiqueradios.com/forums/vie ... 8&t=109446 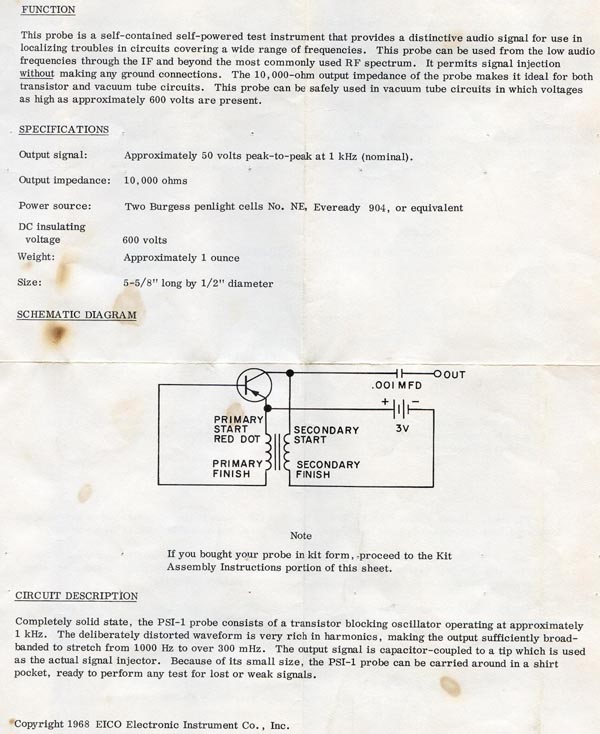 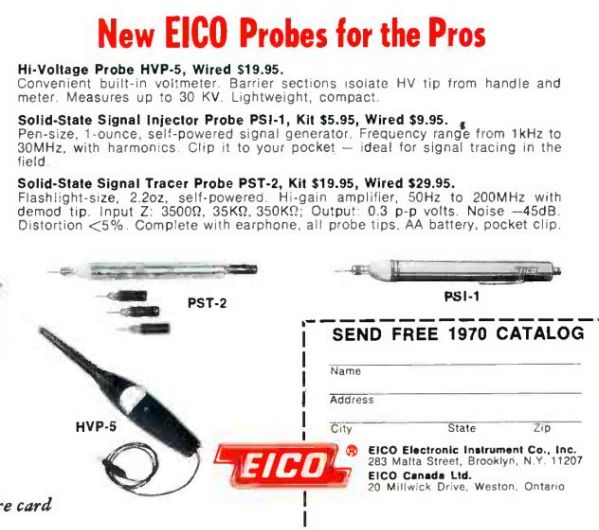 The date code is "6630."
Finding the correct battery was a little bit of a problem: The diameter of the case is the same as an AA battery - two were too long for the case.
So what battery has the diameter of a AA but is shorter?

The web told me it used "N" cells but they seemed too short and the diameter is slightly less.
It turns out that a spring in the end cap near the switch was cross-ways preventing the - terminal from contacting the switch.
The spring had two coil diameters. The smaller coil serves as a contact for the switch with the larger coil pushing against the battery "-" terminal.
I was able to re-seat the spring in the end cap using a long rod as a mandrel.
With the spring in place I was able to switch the batteries on and off but everything was still a tad short.

The positive terminal of the battery contacts a TO5 transistor case to make the positive connection.
I had to pull the internal electronics cylinder out a little to make the assembly longer.
It appears to have compressed into the tip end enough not to make contact.
That made the whole thing work again.

Once running it works like a champ putting out a 1 kHz low duty cycle pulse with a HF ringing "chirp."
I hear tone all over the AM band with it running.

Though its not the more-prized Don Bosco "Mosquito" it was a nice find.
I hope my Dad is glad to see it "restored."
https://ka-electronics.com

I think they bought flashlight cases and removed the head to make these things.
With the internal electronics cartridge taking up extra length they went with shorter "N" (904) batteries which are slightly undersized diameter compared to the flashlight's "AA" cells.

I'm so glad it had the original spring lodged inside.
I would have never been able to figure out how to make the switch work.
It was like solving a puzzle.

I'll try to post an oscilloscope photo of the output.
It's a very unique waveform.

I also found this link to Steven Johnson the source material expert (SME) on the Don Bosco Mosquito: https://stevenjohnson.com/donbosco.htm
https://ka-electronics.com