"Deboosting" Google or Are We Banned? I'll Call Either A Win.

Relax in southern comfort on the east bank of the Mississippi. You're just around the corner from Beale Street and Sun Records. Watch the ducks, throw back a few and tell us what's on your mind.
Post Reply
40 posts

The truth lies somewhere in between.

Zach Vorhies, one of the Google whistle blowers, talks about his safety fears in this video. Zach admits that he has referred Google documents to AG Barr. https://www.projectveritas.com/2019/08/ ... f-my-soul/

IIRC Dr. Robert Epstein is also working with DOJ regarding Google.
That may be a factor in his wife's "accidental" death.
Dr. Robert Epstein Senate testimony: https://www.judiciary.senate.gov/imo/me ... timony.pdf

And then there's this:

Because interviewers keep asking me where people can get info about my kerfuffle with #Clinton, I've set up domain name http://EpsteinTweetStorm.com . Here I expose #Hillary's long & cozy relationship with #Google & refute her shameful assertion that my work has been "debunked." https://twitter.com/DrREpstein/status/1 ... 6766402561

When I first blew the whistle on Google I was put in touch with Robert Epstein. During the call his wife got on the phone and was so happy that she cried.

Now she is gone.

Please pay your respects by responding to the tweet below with flowers.

Anyone want to take a ride in a Google self-driving vehicle?
https://ka-electronics.com

From the accident report in the local paper: "... 29-year-old Vista woman was seriously injured Monday morning when her pickup spun out across a rain-slick Escondido freeway ...". The pickup was a Ford Ranger, the driver Misty Epstein - RIP and condolences.

I don't know where conspiracies come in on this one: Ford Ranger spinning out on a raod slicked by rain?
Top

She could have been run off the road by another vehicle or was pursued on that rain slick road.
Ever heard of Karen Silkwood?

I want to see a police report, a survey and hear what witnesses have to say.
The newspaper was not a witness to the accident and may have never even gone to the scene.
The simply regurgitate what they are told.
I do not trust any CIA-controlled Mockingbird mass-media.
Not only are they lazy with an SJW agenda drilled into them in J-school they're paid to advance and control the narrative. It's their job.

She was reported to have been driving a Ford Ranger.

Just had a quick look and modern Ford Rangers have "Precollision Assist with Emergency Braking" and may have had "Lane Keep Assist." https://www.ford.com/trucks/ranger/mode ... cy-braking

If this was a modern Ford Ranger the steering and braking are under software control and can be hacked.
Vehicle hacking has been done in proof-of-concept.
And who is the leader and expert in autonomous vehicles?
Google.
There may be a software backdoor into the vehicle using over-the-air-updates: https://www.reuters.com/article/us-ford ... SKCN18F2BJ

Before I knew her my wife was set to give a very damaging deposition against a major chemical company.

On the road trip there, with her previous husband, "they" tried to run her off the road by chasing them with a large semi.
Her husband began to figure it out, tried to lose them on back roads, but the semi driver continued to follow and attempt to overtake (over-run) them.
She gave her depo, they eventually settled, and a wave of class-actions followed.
Her depo, and the testimony at trial by her expert witnesses, was extremely damaging.
If she had been killed before trial there would have been no cause of action.
Her expert witness was eventually bought off by the company and his damaging published research suppressed.
I have those documents and have considered publishing them.

I know what companies and organizations are capable of and have made two criminal referrals, state and Federal, in my lifetime.

Have you followed the illegal activities of the Monsanto "fusion center" and their threats against independent journalists?
Monsantos' intimidation often came in the form of illegal surveillance, threats of personal harm as well as lawfare.

Google is no better.

They started their intimidation of Zach Vorhies by calling the police.
The video of that is pretty chilling.

Zach has admitted to handing over his entire laptop of Google documents to the DOJ.
Zach knew Misti Vaughn (Epstein) personally.
If I were him I'd always be looking over my shoulder.

It's pretty clear Dr. Robert Epstein royally pissed off HRC if you have read his August tweet storm. http://epsteintweetstorm.com/

Most people who piss off HRC or WJC turn up dead.
Seth Rich anyone?

If this story was believable and not nefarious why would Twitter shadow-ban it?
What would be Twitter's motivation?
Twitter (CIA) don't want you questioning the "official" narrative.
Think that's bullshit?
Project Veritas has video of a Twitter employee who gets those calls admitting it.

This may have been an accident but I would be foolish to think there wasn't a possibility that they're trying to shut Dr. Robert Epstein up and retaliate for his past testimony and research.

People who go to the DOJ against one of the world's most powerful companies whose wife is involved in an a deadly accident deserve a closer look.
Particularly when there is a pile of dead bodies already around HRC and WJC who directly benefit from Google's corruption.

The elites have said they want 95% of us dead.

I believe them.
On that basis alone I don't think I should give them the benefit of the doubt on anything.

Why would they worry about killing Dr. Epstein's wife in retaliation if he was in their way of stealing an election through fraud and deceit?

Stopping that throws a big wrench in their admitted plans for killing us.

We're dealing with pure satanic evil out in the open.
https://ka-electronics.com

Pissing Off China and Google

So here's what happens when you have a site critical of Google and the Chinese. 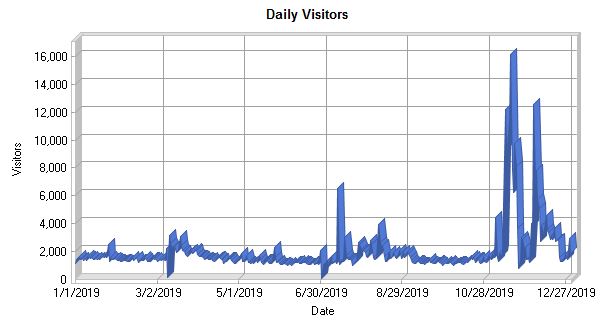 In July and November I must have made them really mad.
IIRC November featured a Xi/Pooh avatar.

Bot swarms from IP addresses in mainland China from Android phones. Hmm....
Must have been over a target.

I've now leveled the playing field for Google's competitors.
Google has gone from being >>10X all others combined to only about 65% in 2019.
Based on Google page rank I'm not sure why I got any.
My contrarian goal is to disappear from Google search results completely.

The search results Google has referred to this site have always been pure shit.
Google advertising is a scam.

Real visitor site traffic has remained about level.
We saw over just under 700,000 unique visitors last year who produced over 6 million hits from 198K unique IPs.

Yours truly paid for this bandwidth with the support of my customers.
Thank you.
https://ka-electronics.com

I'm sure the elites only want to kill off the smart ones. The dumb ones they can manipulate just fine. And so its less bodies to deal with.
Top

On Sunday he [Dr. Epstein] tweeted: 'Last year, after I briefed a group of state AGs about #Google's power to rig elections, one of them said, "I think you're going to die in an accident in a few months." A few months later, my beautiful wife #Misti died a violent death. Makes you wonder.' 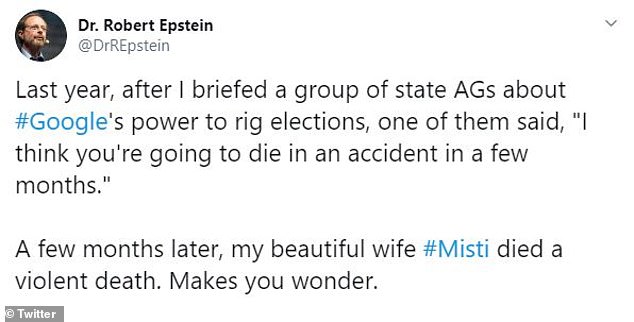 Did Google Assassinate Wife Of Whistleblower Who Exposed The Search Engine?


A high-profile Google whistleblower who back in July testified before Congress that the search engine meddled in the 2016 presidential election on behalf of Hillary Clinton is now suggesting that the fatal car crash that killed his wife last month may not have been an accident. 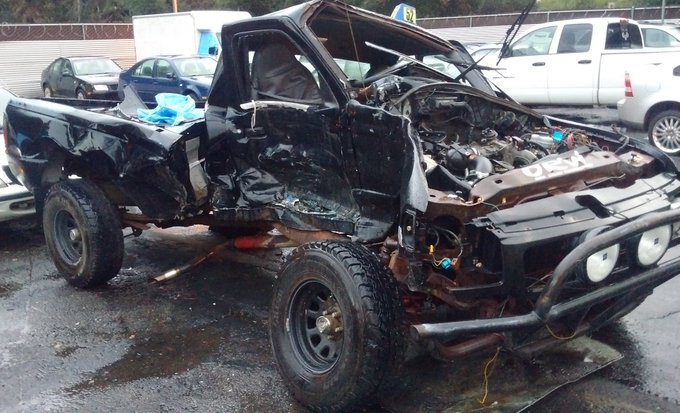 Re: Weaponizing Google's Algo Against Google Itself

Some time ago I began to introduce speech and links that Google's algo would determine to be "wrong think."
Things like "learn to code" or links to Zero Hedge, InfoWars, Breitbart and other independent media.

The thread "I Am A Google Deporable" and asking them by phone "why would I support Google with my business when they clearly want people like me dead?" may have also flagged this forum.

I also tried deactivating their bot's credentials but it still crawls us regularly.

I am proliferating "wrong think" and Google doesn't like it. 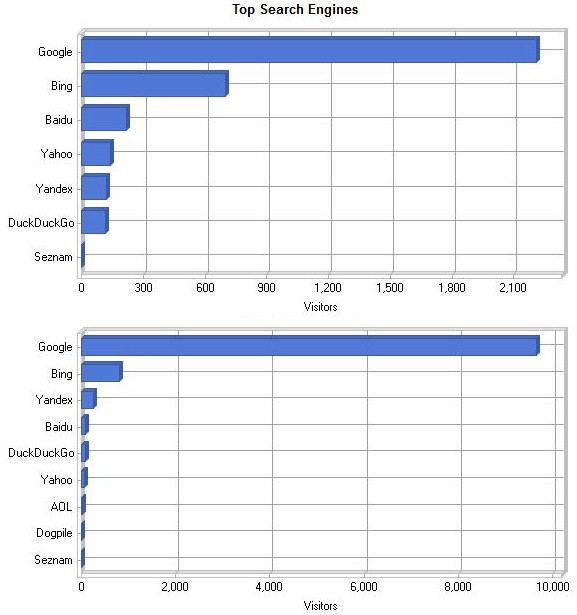 The playing field is being leveled.

The irony is that the five-fold reduction in Google referrals have not resulted in reduced site traffic.

Question for Google: What fucking good are you?
I'm demonstrably better off by annoying your politically-biased search algos. The results prove it.
https://ka-electronics.com

February data had Google at 55% of total.
Referrals from Google search is now only 50.7% of the total.

Visitor traffic is up.
Pissing Google off is truly a worthwhile effort.

Bing is rising at 28% of referrals whereas a couple of years ago it was single-digits.
https://ka-electronics.com

CDC: "For 6% of the deaths, COVID-19 was the only cause mentioned. For deaths with conditions or causes in addition to COVID-19, on average, there were 2.6 additional conditions or causes per death." https://www.cdc.gov/nchs/nvss/vsrr/covi ... /index.htm
Top
Post Reply
40 posts