I found some deep drawn steel pans made for a buffet steam table that work pretty well as a magnetic shielding chamber. A pair of those clamped lip to lip using spring document binder clips with some dollar store lasagna trays inside as extra EMI shielding works pretty well. The theory is that each impedance change from air to metal gives you extra shielding, so the heavy steel is not redundant with the extra two layers of aluminum lasagna pans. To keep the DUT from shorting out, I place a folded kitchen towel on the inside in the bottom.

The only annoyance was bending a little opening for the cabling where the top and bottom pans join, but the extra aluminum pans sorta fluff up the joint and make it possible to bend open a passage big enough for a few small cables without having much of an air gap between clamshell halves. For giggles, I also clamp a piece of braid to the pans with one of the binder clips, and attach the BNC on the other side of the braid to whichever test set or generator is being used. So, you get an earthed, E and B shielding chamber that works pretty well!

I have some friends who make tube amps and they swear by baking trays for prototyping.

As for screening, all the designs for instrumentation LNAs (which are virtually MC amps) generally have 3 boxes nested for screening. Bit overkill for audio unless you can screen the cartridge as well. As I have mentioned before, I'm going for the wuss solution and battery powering everything that I can.
Top

I spent some quality time with the mower and string trimmer the last few days and haven't had a chance to look into the relative strength of the hum field. Then I remembered that I had this gizmo given to me by a friend about 20 years ago: 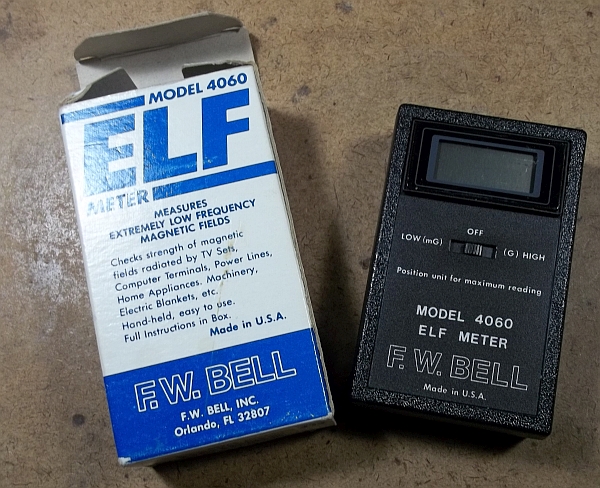 The ELF Meter should allow me to read the absolute strength.
Not sure I've ever put a battery in it though.

The bottom line is that the hum signature changes significantly as the arm moves from arm rest to platter even with the platter and everything around it off. This suggests that the hum is typical of a DL-103 in the real world.

You will (almost?) never see a commercial manufacturer specify a meaningful noise measurement spec that can be interpreted much less an FFT with a real cart mounted on an arm in the real world.

As someone who has had to deal with recording spaces in a strip center located next to an MRI machine or a 56 input unbalanced mix amp console sitting under a structural steel beam carrying neutral current I can assure you that this will rapidly become a rabbit hole.

Do you know how had it is to keep a guitar pickup quiet with the power supplies feeding the MRI on the other side of the wall? The client moved.

In addition to the cast-iron vent pipes in the wall behind the TT I forgot to mention the three converging cast iron drain lines directly underneath it and the black iron natural gas line flowing diagonally across the room in the basement below just below the sub-floor. (FWIW the null point seems to be at right angles to the gas line.)

I like Brian's idea of the pull box for the preamp vs. an aluminum Hammond enclosure which provides an excellent e-shield for a MM preamp but no magnetic shielding for a MC preamp. The pull box is the next best thing to mu-metal. This might pickup 6 dB at most but it looks to me that the DL-103 is an equal contributor.

I appreciate the interest in shielding but there's not much we can do for the cart and I think we'd be hard-pressed to see the hum with the stylus resting on a stopped disc.

The point at which you can hear it is at such death defying level I'm not worried about it.
https://ka-electronics.com


You will (almost?) never see a commercial manufacturer specify a meaningful noise measurement spec that can be interpreted much less an FFT with a real cart mounted on an arm in the real world.


I appreciate the interest in shielding but there's not much we can do for the cart and I think we'd be hard-pressed to see the hum with the stylus resting on a stopped disc.

The point at which you can hear it is at such death defying level I'm not worried about it.

Agreed. Although I know a man who could centre tap the coil windings for true balanced operation...
Top

Not sure how center-tapped windings helps unless they are then somehow wired hum-bucking.
This is differential mode hum as if it were the same as stylus movement.

Balanced is balanced without regard to whether the source is center-tapped (symmetrical) or floating. (Whitlock states it best on page #2.)
http://sound.whsites.net/articles/balan ... rfaces.pdf
https://ka-electronics.com


You will (almost?) never see a commercial manufacturer specify a meaningful noise measurement spec that can be interpreted much less an FFT with a real cart mounted on an arm in the real world.

IIRC I used something like a 1k or 1.5k resistive input termination for measuring MM Preamp noise specs. Technically there should be some inductance too, but I never bothered. I had an inverse RIAA network for response measurements that I I may have just left in place.

I appreciate the interest in shielding but there's not much we can do for the cart and I think we'd be hard-pressed to see the hum with the stylus resting on a stopped disc.

The point at which you can hear it is at such death defying level I'm not worried about it.

Agreed. Although I know a man who could centre tap the coil windings for true balanced operation...

That makes you one of only 2 honest men in phono preamps then!
Top

I suspect there are (or were) more than two, but in my experience the consumer electronics segment, including phono preamps was not linear/rational. Thus my decisions to escape into professional (cough) audio at Peavey in mid 80s. I used to joke that it is hard to BS an auditorium full of listeners in the audience, unlike how a handful of audiophools in a small room can be mesmerized.

The tweaky magazine reviews of phono preamps made me crazy... In any vinyl playback system (IMO) there is a list of things that will impact the sound more than the MM phono preamp.

A notable number of reviewers were ignorant or chose to ignore these several more significant factors. The final nail in the coffin for me was that I received widely different reviews for the same preamp... not only the same design, but the exact same unit. Coincidentally the best review I got was from the most respected reviewer, no doubt with a high quality reference system. The review happened accidentally (a common friend lent him a unit I had out for comment and the reviewer was so impressed he pushed the magazine to review it). All a little too late to change my exit plan from that market (I can't dismiss that the wheels fell off the kit market business model around the same time, adding another incentive for a hard reset).

I ran a lot of experiments but I'll cut to the chase:

I nulled the preamp box in the hum field without the input connected.
The input is open circuit terminated internally by 100Ω.
By orienting the preamp's aluminum box I could reduce the hum spurs into the noise floor which measured, with RIAA EQ, -68 dBu unweighted.
The preamp's null point, and the null of the ELF-meter were about the same: The preamp provides more resolution.

I then connected the cart (without moving anything) and the spurs popped out of the noise floor.
With the DL-103 on the tone arm rest one channel measured -72 dBu the other about -66 dBu.
Moving the arm so that it hovers over the outside of the platter the better channel rises about 2 dBu to approximately -70 dBu.
The other channel stays about the same.
With the arm near the label the worse channel improves by about 2-3 dB.
Overall the difference in hum level between channels changes about 5 dB from one edge of the disc to the other.
The DL-103 appears to be the significant contributor.

I did try a very crude cookie tin to shield the aluminum box.
The steel was pretty crappy: It didn't hold a magnet particularly well and with one end open made no difference.

IMHO the preamp box, if not totally nulled in the hum field can either add or subtract from what the DL-103 is already contributing.
Even if the preamp box is perfectly nulled, the DL-103's contribution will always be there and the cart's normal differential mode hum is as great, if not greater, than the field being radiated into the box.

This room of the house has a background ELF-meter reading of 1-2 mG.
Most rooms read 0 unless you're within about 1-1/2' of a transformer.


The tweaky magazine reviews of phono preamps made me crazy...

I read Fremer's reviews only to laugh. He was a stand up comedian before becoming a reviewer and it shows. He always gives best reviews to the most expensive equipment*. He does have an excessive record collection though so he gets a little tolerance for that.

I realised too late that I was too young to appreciate John Crabbe before he retired. At least in the UK he was the last of the sensible reviewers.