Where we discuss new analog design ideas for Pro Audio and modern spins on vintage ones.
Post Reply
27 posts

I have a couple Yamaha MLA7 eight channel preamp units I used to carry for remote jobs. I found a mention from Jim Williams / Audio Upgrades about changing them to be more like the Trans-Amp circuit, and similar mentions about some Soundcraft input stages.

He seems to famously tell you half the recipe when he talks about his mods on most things, without mentioning it's partial. I can't find much real detail about the Trans-Amp, but think I've dredged up everything that's out there.

Since this is definitely not a design space I normally think in, I wanted to see if what I'm getting here is on the right path. I found he'd not mentioned moving R114/C107 in one place, in another he did. Measurements indicated (I messed with this a year ago and forgot about it) that was also needed to match previous noise performance at very least. He always mentions changing R110 to half value to make up for the gain change at highest gain, but I found that was not proving true in practice. I'm thinking he's left out some other downstream feedback changes.

Thanks for any thoughts. EDIT : Never mind the silly drawings; deleted.
Best,

You could trick the second half of IC101 into unity gain inverting to execute that basic transamp (per the ap note).

The original transamp I dissected in 70s(?) used a 3 op amp topology (last stage was diff to SE stage). Peavey was already using the 2 op amp approach in mid 80s when I went to work there and I could not justify adding a third op amp from bench tests (peavey was sharp pencil operation).

I thought of that too.
It would still need to realize common mode rejection.
https://ka-electronics.com

So the thing I've explained poorly:

I think the reference is only the bit of including the transistors in the feedback path to lower distortion, like the trans-amp does. I think. I don't believe he's referring to the entire circuit. That seems to be what he's advocating with the Soundcraft console front end. I haven't found any reference circuit that does this in digging around, there must be a bunch and I'm blind. Am I at all getting that part right?

The Yamaha PCB and case is packed in there pretty tight, I don't see doing a lot to it.
Best,

I found the Soundcraft circuit published by Self in Small Signal design figure 13.3 or 13.5. 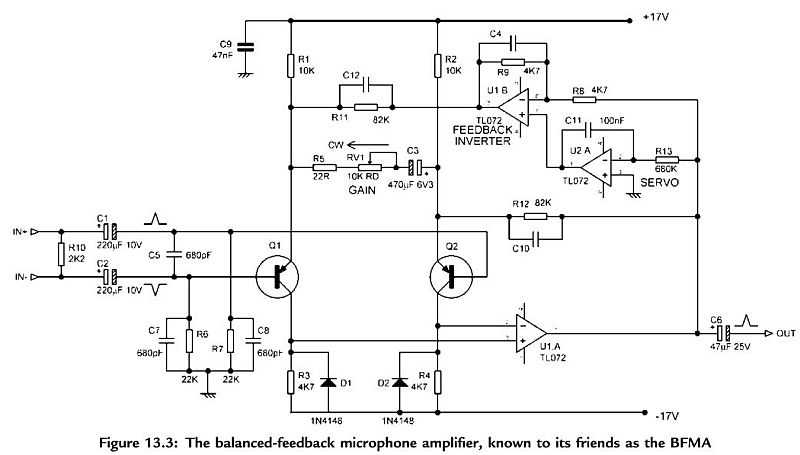 Referring to the sch in your OP: So what you do is take the second op amp stage and use its output to drive the anti-polarity feedback to the second emitter of the differential pair aka "current feedback." The first op amp is modified so its output drives the feedback resistor to the first emitter.

Figure 13.5 shows a lower-gain version that does not require a servo.
https://ka-electronics.com

I thought of that too.
It would still need to realize common mode rejection.

It does (if properly implemented). I had a similar knee jerk response when I first saw it at Peavey, but it works. There are some subtle differences but I used it (2 op amp topology) in my big AMR recording consoles (and many more).

I do see the common mode rejection in Self's figure 13.3 U1A (and figure 13.5 which is the two op amp version).
Was Peavy's similar?
https://ka-electronics.com

Yes but without the servo...

I doesn't look that hard to modify the original circuit to return feedback to the emitters.
The pdf extract had gain equations which may help you Doug.
https://ka-electronics.com