MM flat preamp … i need a set of fresh ears

MM flat preamp … i need a set of fresh ears

i have 2 of wayne's MM preamps, 1 MC preamp, and the switcher/EQ board. all i gotta do is some metal work… duh.

one of the MM preamps will be dedicated for mono. i have several ortofon mono carts—a CG 25, a CG 65, and an SPU Mono [how is that for an oxymoron—SPU stands for Stereo Pick-Up, so here we have a Stereo Mono Pick-Up…] the CGs are low Z with 6 ohm coils and 1.5 mV output).

this SPU Mono is not a "true" mono cartridge; the two coils are rotated 45° so it does have vertical compliance, but the coils pick up only lateral movements. according to ortofon, the coils have 100 ohms DCR and are said to produce 3 mV @ 1khz/5cm. ortofon recommends a load of 47k. the lead out wires of the coil are paralleled at the 4 headshell pins so that the cartridge can be used with a normal stereo phono input. if the cartridge–as recommended–sees two 47k phono preamp inputs in parallel, the effective load would be 23k5. which still seems high to me.

in order to find out the optimal load, i ripped an old verve mono LP ("ella and louis", a very early mono pressing) with different loads. because of the missing metal work, i used the mic preamps of my metric halo ULN-8; channels 1+2 were modified to 10k input, channels 3+4 to 47k.

if i only connect one channel of the cartridge to the phono preamp, the cartridge "sees" the nominal 47k or 10k. with both channels connected, the load is paralleled i.e. 23k5 and 5k. as i also have a decent 1:5 MC step-up transformer, i tried inductive loading, too—1 channel into 47k equals 1k8 reflected load, both channels 900 ohms, and using the 10k inputs, the reflected load is 400 and 200 ohms.that makes for eight different loads from 200 ohms to 47kohms. i have uploaded the files as mono wav in 96/24 to my server; the file is pretty big with 1.1gb… here's the link: <http://www.rintelen.ch/download/ella_mono_wav.zip> (guaranteed virus-free; i think wayne can vouch for me)

what i would like to ask is if you could listen to the files and let me know your opinion, which loads sounds "best". (i have listened to the files so often that i can't trust my ears anymore…)

each of the 8 tracks starts with a 1k tone from a test LP; i tried to set the recording gain so that 1k is at around -22.5 DBFS. this reference tone is followed by 10 seconds of pink noise and then two songs from the LP. the files were not de-clicked because i noticed that the clicks change their sound with the load. the files were recorded flat with 192khz/24 bit, then RIAA-eq'd in DSP with 7dB make-up gain and resampled to 96khz. as is, the loudness of all 8 tracks should be within ±1 dB; if you use the 1k tone, you can normalize the level even better.

i have noticed that with loads between 47 and 5k i could pretty much use the same gain. but once the load was 900 ohms or lower, i had to adjust the gain. going from 400 to 200 ohms required 2.5 dB more gain. the cartridge begins to sound thick and a bit sluggish at these loads, but i noticed that the clicks are less pronounced at 200…1k8 than with lighter loads i.e. the load really damps the generator.

thank you all in advance for downloading and listening!
some people are in charge of pens
that shouldn't be in charge of brooms
(graham parker, "Don't Let It Break You Down")
Top

Thanks for posting and sharing these files!

I'm downloading the zip file now and will listen tomorrow on speakers.
https://ka-electronics.com 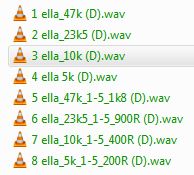 I really need to load up all eight tracks in the editor and solo them.
For now I listened one at a time.

The 200 and 400Ω loads (reflected) sounded nice but darker and a little strained. (Tracks 8 and 7.)
All of the transformer samples (5-8) sounded warm with the clicks being more subdued on all of them.

Termination, and the type of termination perhaps seems to have a big effect on the brightness of clicks.

The resistive terminations all had brighter clicks and I tended to prefer 5-23K5 termination for listening.
47K sounded bright and almost a little shrill.

For listening without click removal I think I would like the two highest 1:15 transformer terminations. (tracks 5 and 6)
The clicks seem to be more masked.

If I wanted to remove those clicks in DSP I think I would go with active 5K-23K5 termination.
The resistive terminations seem to be more transient-sounding on clicks that would ease detection.
5 or 10K sounded all-around best of the restive terminations.
https://ka-electronics.com

i have 2 of wayne's MM preamps, 1 MC preamp, and the switcher/EQ board. all i gotta do is some metal work… duh.

I suffer from that problem too!


one of the MM preamps will be dedicated for mono. i have several ortofon mono carts—a CG 25, a CG 65, and an SPU Mono [how is that for an oxymoron—SPU stands for Stereo Pick-Up, so here we have a Stereo Mono Pick-Up…] the CGs are low Z with 6 ohm coils and 1.5 mV output).

Nice collection. I like the traditional swing arm ortofon monos, although cannot afford one. The SPU mono is indeed a strange beast.

Aside. I do have a plan to get one of my cartridges adapted for mono by rotating the coils 45 degrees to give M+S output (which is how Deccas work). As I have an MSII board for assembly it would make for an interesting experiment.
Top

i have uploaded the whole enchilada of 192k raw (flat) files to my server. be warned that the file is … uhm … fairly large (2.5 gb). the files are also longer because each combination was recorded in realtime and in one take, i.e. record test record track A1 > flip test record and record track B2 > remove test record from platter and put on ella and louis, cue to A2 and record … here's the link: <http://www.rintelen.ch/download/ella_mono_wav_RAW.zip>

this morning i took a closer look at the clicks. there's a particularly nasty one at around 35 seconds into the second song, circled in red (on a raw file): 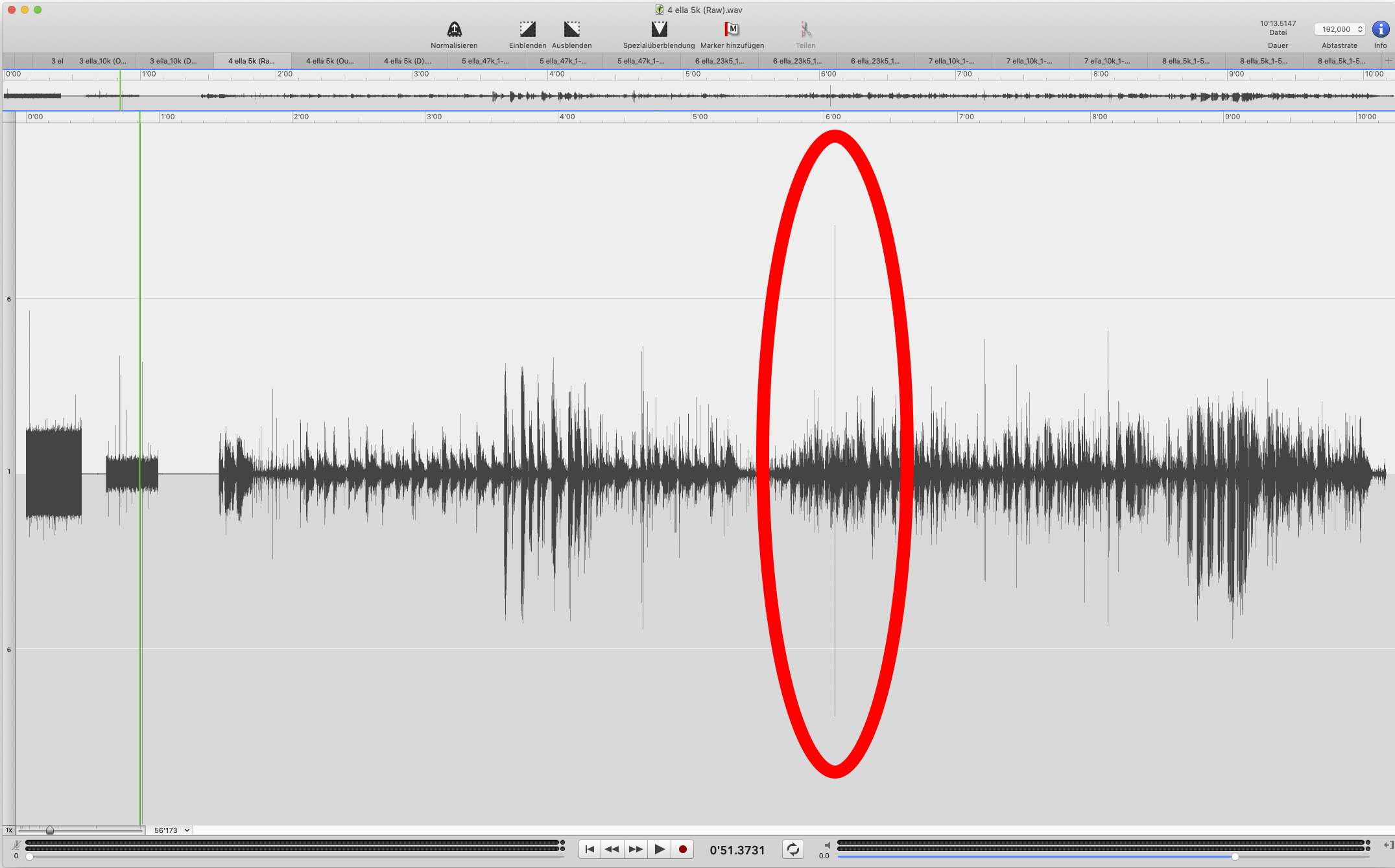 so took screenshots of this click from all 8 raw files.

(please note that for easier comparison, the 192k raw and EQ'd ("Out") screenshots are shown 2:1 to have the same width as the 96k downsampled file (D). 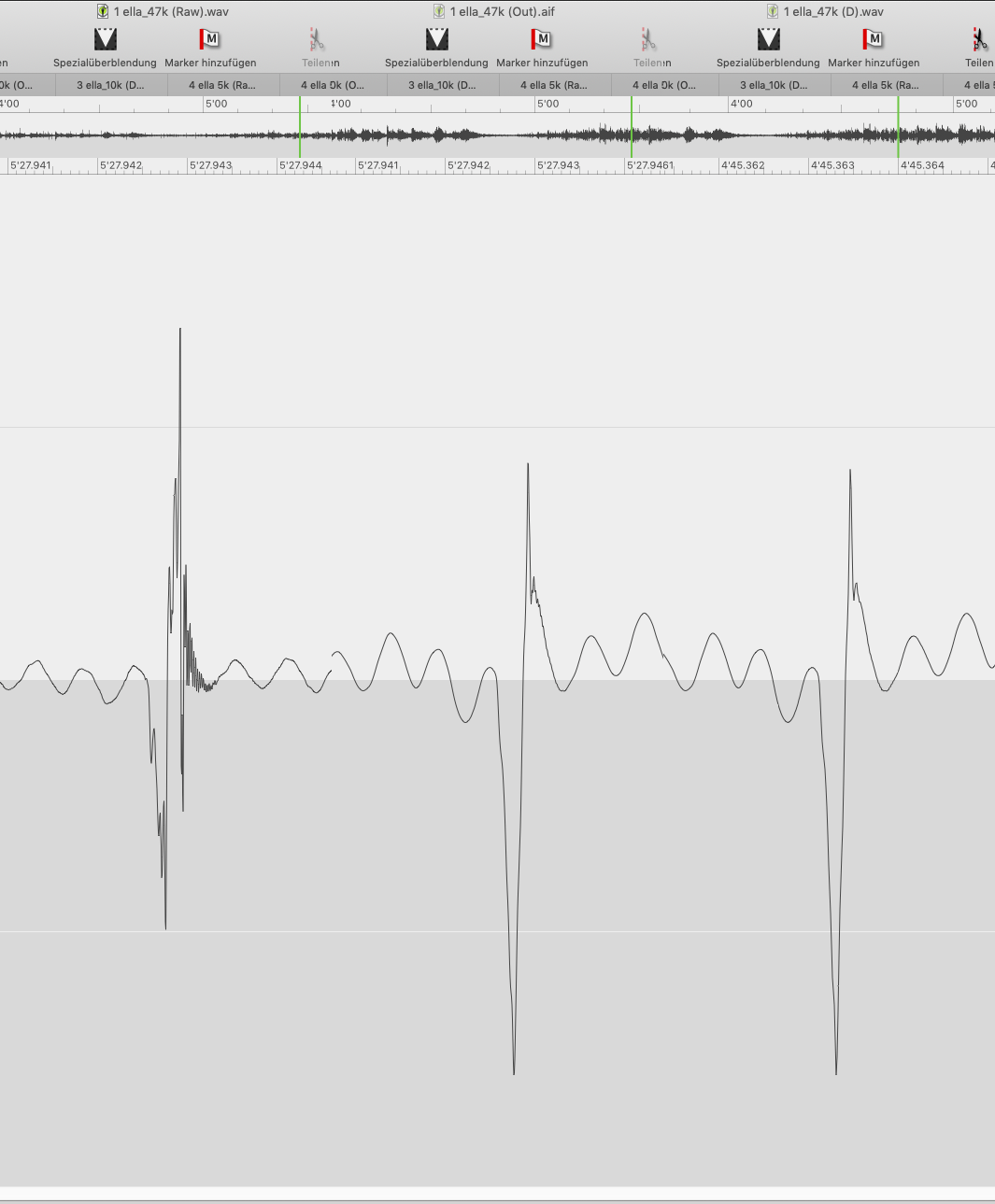 the RIAA irons out most of the wiggles; the (visual) difference between 192k and 96k EQ'd is super small—on 192k (Out), the small wiggles after the two peaks are still visible, after downsampling they're gone. 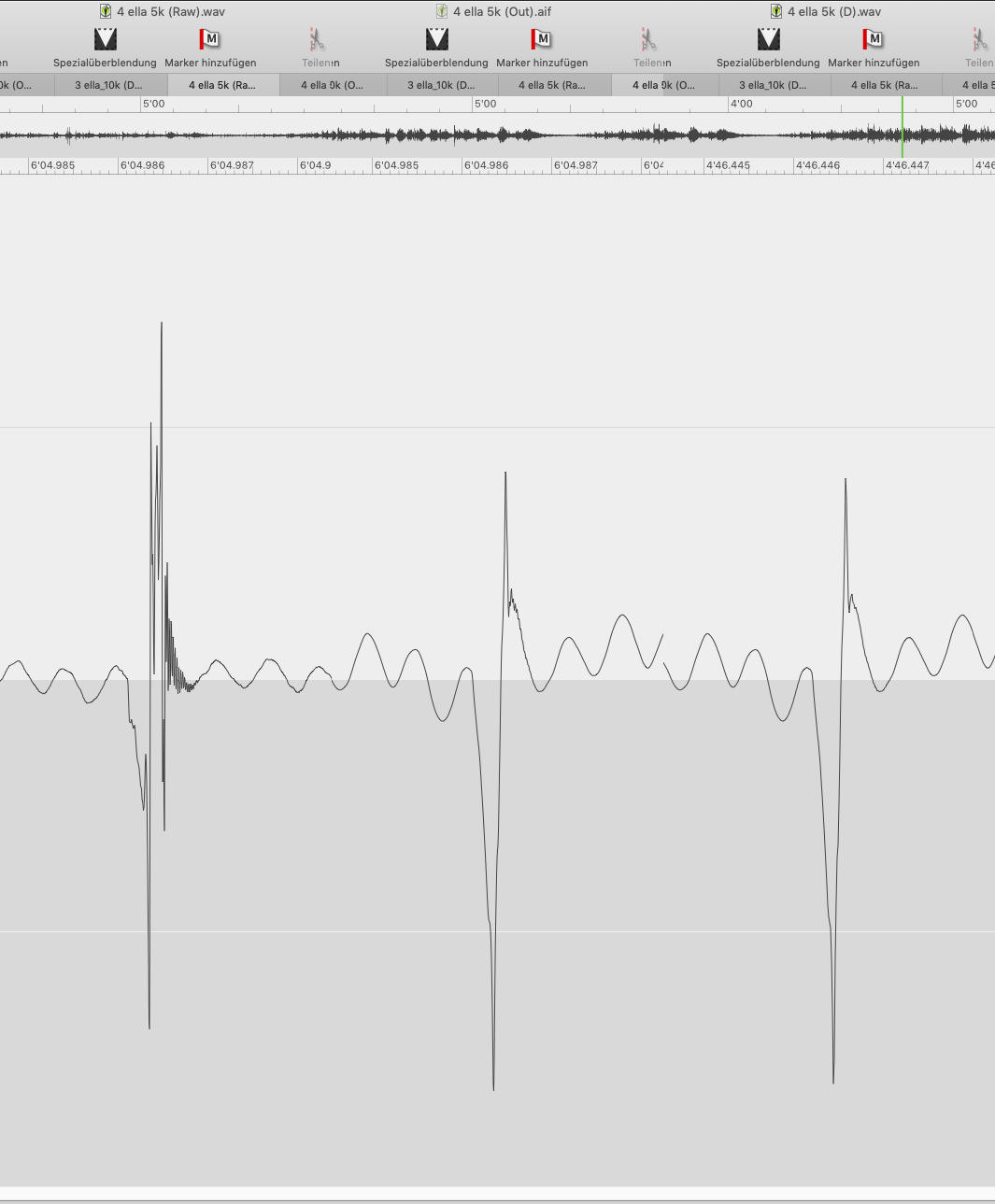 the RIAA flattens everything… just look at the downward slope before the click. and on the … uhm … positive side, the RIAA turns 4 peaks into 1… also the amplitude of the click in 192k seems to be oooh so slightly higher than in the downsampled version. i don't think this guesstimated difference of 0.01 dB will be audible…

and last, not least, the click with 900 ohms inductive load: 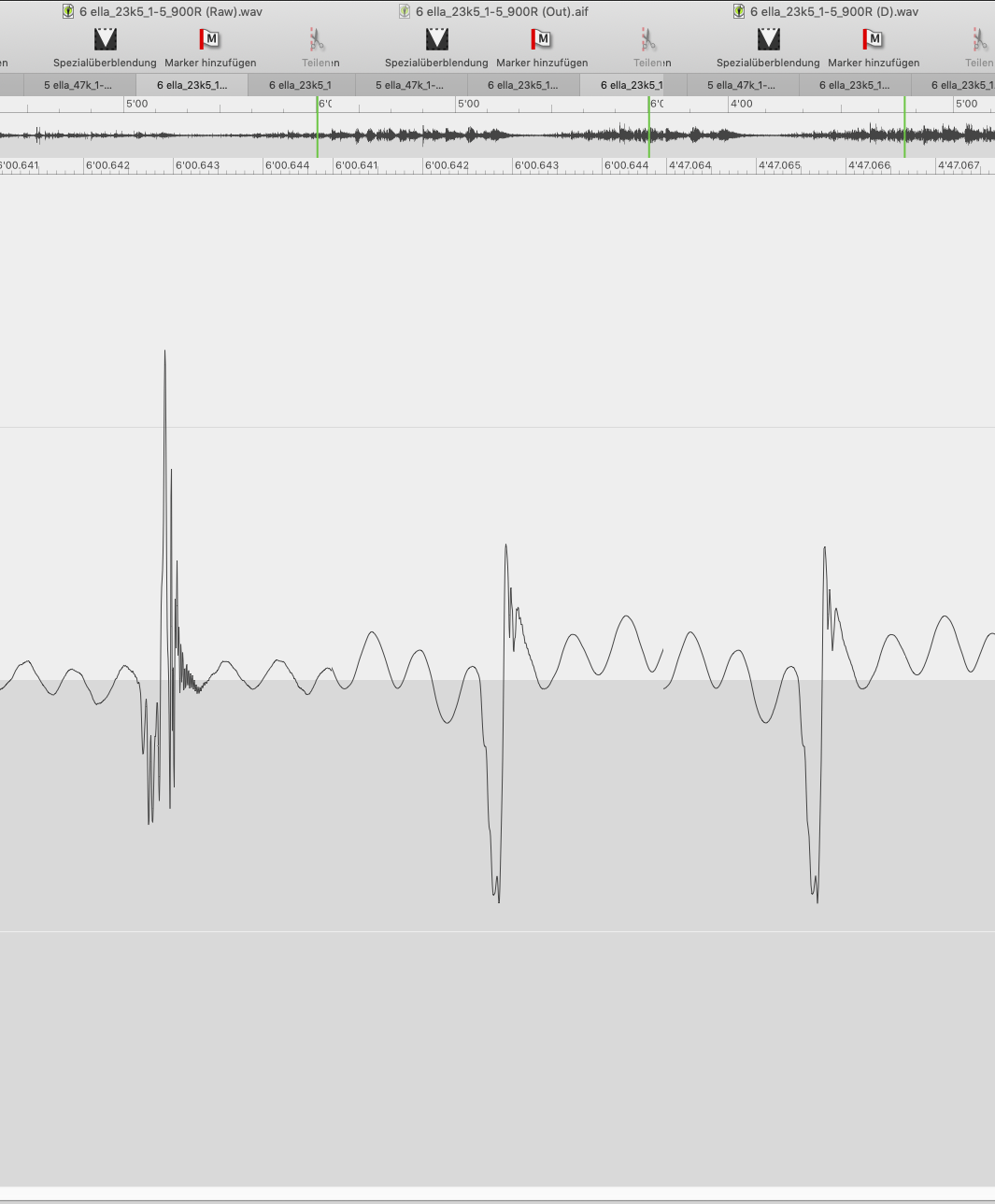 this explains why wayne found the clicks less obtrusive with transformer loading—and why i may probably settle for this load; i'd rather have a bit more work with click removal but enjoy warmer, more organic sound. but i will talk to the transformer guy and ask him if maybe a couple of turns more (and thus higher inductance) on the primary wouldn't be a good idea…

(@ wayne, i'm glad i haven't yet clipped the parallel leads in the headshell — or else, all this wouldn't have been possible…

christian
some people are in charge of pens
that shouldn't be in charge of brooms
(graham parker, "Don't Let It Break You Down")
Top

I have a hard time getting excited about vinyl these days but always have opinions.

Is it possible to perform null tests between pairs of files? It will be impossible to time sync them together perfectly so you will probably get some flanging sound, as they slide in and out of deep null, but the depth of the best null you can get may reveal some general information about general differences between pairs of samples.

This is interesting and kind of reinforces why I don't like transformers for MC stepup. Unless you can get them on the bench and measure the ringing and work out correct loading (which may include a Zobel) you are slightly flailing about.

That is a fairly mightly click for a mono record. Have you actually looked to see what is causing it?
Top

This is interesting and kind of reinforces why I don't like transformers for MC stepup.

hehe … maybe that gentle ringing (h3…) of an unloaded transformer kind of reminds me why i do like transformers for MC stepup … and wayne also liked the 1k8 and 900R transformer best for listening. and if you want to tame the transformer, you need to look at the interaction of the primary with the cartridge. tough look if both, the cartridge and the transformer have resonance peaks or phase shifts around the same frequency. theoretically you should tackle the MC's resonance (probably with r||r-c or even r||r-l-c) in the cartridge. separately, find the best load for the secondary with Rs on the primary. change the load on the secondary for best squarewave response and tune with zobel. then connect the cartridge and see how a squarewave from a test record is reproduced. then optimize both zobels/r-l-c iteratively for perfekt 10k squares. the next morning humidity or temperature will be different, the suspension a tad stiffer—and your careful finetuning is obsolete…

(each of my many MC SUT from sowter, lundahl, jensen, silvercore, haufe… has its own sonic signatureit's a bit like tube rolling—there's nothing obviously wrong with any of them, but with some it just sounds better.


That is a fairly mightly click for a mono record. Have you actually looked to see what is causing it?

no idea … it's on the record and pretty persistent even after washing the LP.


Is it possible to perform null tests between pairs of files?

my turntable is a vintage EMT-930 from the early 70s … a german broadcast idler that will keep its pace, but will invariably have small speed instabilities. so the timing will be off by a ms or two pretty quickly…
some people are in charge of pens
that shouldn't be in charge of brooms
(graham parker, "Don't Let It Break You Down")
Top

If you have a read here https://www.diyaudio.com/forums/diyaudi ... reamp.html there is a section on how to use a PC soundcard to get the transformer loading sorted. Not a beginners guide tho!

I know a lot of people enjoy the fun of tuning with transformers, but I like to make my life overly complicated further down the chain

But if I had an EMT it would def be an SPU or an EMT TSD cartridge on it.
Top
Post Reply
19 posts