Where we discuss new analog design ideas for Pro Audio and modern spins on vintage ones.
Post Reply
53 posts

I think there are 2 considerations when using MS filtering.

Firstly is getting rid of subsonic crap .. especially for the vertical (S) signal. For this, at least 2nd order is required and peaking is bad.

The other consideration is crosstalk which will be poorer due to unavoidable phase etc issues. There may be peaking on the individual LR channels.

Wayne has said he prefers some of his experiments with peaking.

-zillion dB crosstalk is completely moot when you are listening to speakers.

You can do loadsa other stuff once you decide on individual filtering on MS.

One elephant in the room is the audible difference between a mono source panned to the middle compared to panned hard L or R. EQing M does wonders for stereo with the right recording .. but the "crosstalk" goes to pot.

I did loadsa stuff to improve stereo in my misspent youth which led eventually to Ambisonics and my position as the High Priest of Tetrahedral Ambisonic mikes. Ambisonics can be considered a sophisticated 3D 'MS' system which attempts to treat ALL directions equally (including off the horizontal plane).

The with the right recording quote really sums it up. You listen to what you have tweaked and if it sounds good .. it IS good.

I did the MS module for Calrec M-series circa 1980. The BBC wanted -zillion dB 'crosstalk'. But they also wanted a pot rather than a multi-position switch. I just specifed in the test procedure that the '-zillion dB' position had to be somewhere in the centre detent position. There was a bypass switch with '-zillion dB crosstalk' but you couldn't hear any difference on speakers or phones as long as you were in the detent.
Top

I think the best thing about both techniques is that they don't mess with mono.

Headphone listening benefited the most from the steeper crosstalk curve of second and third-order LR +/-S bass to mono.
Monitoring on speakers may or may not benefit from steeper crosstalk curves in a real room.
The lazy first-order steering of LF to mono (vs a higher order) may actually be a benefit since it expands cone area faster in 2.0 systems or steers more to the subwoofer in 2.1.

Higher filter order and absence of peaking in the Vertical gives MS an advantage for vinyl mastering.
The LR peaking doesn't affect lateral/vertical cutting - it reappears in the playback cart output after transformation from vertical/lateral to LR - and the errors from it sum properly back to mono.

The single order crosstalk curve resulting from EE doesn't matter as much because the medium doesn't allow it.
Maybe 25-30 dB at most? So yeah a zillion dB doesn't get you much.

The "in" polarity crosstalk resulting from EE may be of benefit cancelling out-of-polarity crosstalk of cutterhead and cartridge mechanical errors.
I need to find the post where I increased measured crosstalk by mono-blending playback.
After seeing adjustment of the Ortofon cutterhead I'm not sure the out-of-polarity nature is universal to the Westrex system but the one test disc I have is universal with every cart that's played it.

I think I'd like to show a second-order EE using MS and then do a comparison as Paul suggested between it and an EE-77.
I think all things being equal the second-order "MS-EE" can be set an octave lower to achieve the same vertical modulation and provide an octave lower crosstalk curve.

The Tears for Fears "Sowing the Seeds of Love" cut I sent Paul drove the lathe crazy with too little EE so it may turn out to be a very good real world test.
https://ka-electronics.com

I'd be happy to check some test files on the lathe to see how they behave in a real world situation.

These are of course my 2 considerations. One objective and the other subjective.

In the 70's London/Decca/Argo recorded Benjamin Britten's Antiphon which starts with a series of 32' (16Hz) organ pedal notes. These are the biggest LF wriggles ever recorded on vinyl. The disc was used as the ultimate test of LF in da days when organ reproduction was considered important.

It was also the early days of stereo & the Decca Tree. Fortunately the Tree uses omnis so is mostly mono at extreme LF.
Top

Paul - I'm definitely going to take you up on that offer. What we could start with is me sending you a file and with you telling me what EE-77 (or the RF EE-77) frequency makes it cutable. I could use that as a starting point to send some files comparing single-order to second-order.

Ricardo or John - What I'm having trouble wrapping my head around is why the Vertical crossover using the LR +/-S method is one octave lower than the crosstalk curve. (At least with multi-order filters.)
I think the lower vertical crosover has to do with the 0.5X gain scaling required to subtract Side.
(MS doesn't have such scaling so the derived LR response and the non-derived Vertical have the same Fc.)
Nuemann scaled Side by 1/2 on the Send, the Stereo Width Controller does it on the return.

A block diagram of the VAB-84. Ignore the dynamic part.

What appears to be happening is that the vertical curve's effective cutoff frequency is lowered by the gain factor which, being 0.5, makes Fc 1/2 lower.
It measures that way, but the low-Q peaking makes it hard to discern if it's actually 1/2 or just low Q.

IIRC the VAB-84's variable low pass filter went to 1 kHz which is very high for an EE but if it's effective frequency is 1/2 lower, at 500 Hz, its right in line with the beginning of RIAA LF boost.
What it looks like to me is that the gain scaling shifts the derived Fc from the actual Fc of the filter.
https://ka-electronics.com

FWIW I never used this crossover alignment but read about it in National Semi app notes back in the '70s-80s.

Me neither. The MS approach has identical cutoffs between HP and LP and the derived filters I've toyed with in the past don't either.
But the LR +/-S has that pesky gain of 1/2 after the filter which it requires to work.
https://ka-electronics.com

Me neither. The MS approach has identical cutoffs between HP and LP and the derived filters I've toyed with in the past don't either.
But the LR +/-S has that pesky gain of 1/2 after the filter which it requires to work.

Well, turns out there is an inherent frequency offset with derived, subtractive filters. 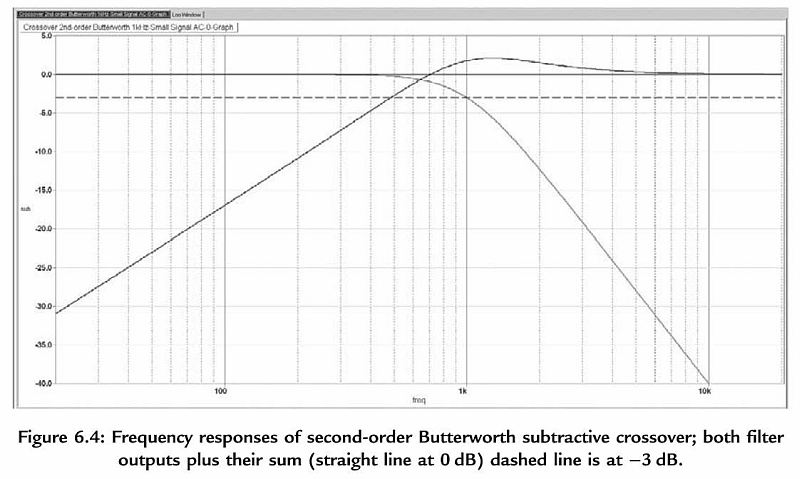 The National Semiconductor "Audio Handbook" also shows it - thanks for the copy JR.

Wanted to pop in and update this thread.

I've been playing with a simple second-order HP filter for Side combined with a correcting Allpass in Mid.
At the moment I'm checking the filters and the Allpass looks promising.

One thing about Allpass filters that's not intuitive is that the phase angle at cutoff of a simple first-order Allpass is twice that of it's HP equivalent.
I stumbled upon this fact and once I did, things fell into place.

The tuning of the Allpass correction filter has to be 1/2 the Fc of the actual Side highpass filter.
They seem to match very well with the greatest errors in the stop-band.
I can compare both in band and stop band phase both with and without Allpass correction and the phase differences without are huge.

I need to lash the filters into an MS and run some sweeps.
It should give us the best of both: A second-order vertical Response and a second-order (or nearly so) crosstalk curve.

My hunch is that the phase matching error between Mid and Side may introduce minor ripple in Mono.
It would be better if it didn't and only affected L and R.
I think its easier to hook one up and see rather than think about it too hard.
https://ka-electronics.com