I'm running the DL-103 a little light at 2.5 g for this hot cut and it mistracks slightly during the final crescendo.
It still knocks the socks off compared to the S680.
Monitoring the RAW output on a 'scope in X-Y as a goniometer during the transfer is very educational.
https://ka-electronics.com

Who says you need a fancy pants cartridge

To my cloth ears that sounds pretty good. I can't hear anything to suggest the 103 is particularly unhappy in that arm! I'll have to try and spin up my copy over the weekend.
Top

I decided to check the DL-103 square wave response with terminations of 100Ω (the recommended minimum) and the 1000Ω used by Denon for response measurements.

As I expected there was a difference in level but not much change in wave shape. 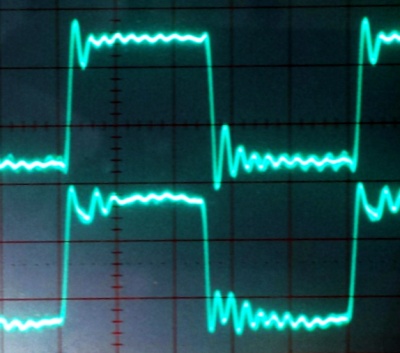 From the oscillograms it looks like the 1KΩ termination is about 2.5 dB hotter.

The source impedance with 1KΩ termination is about that of the cart which is 40Ω.
With 100Ω termination Rsource is around 30Ω.
All other things being equal the S/N ratios shown here viewtopic.php?f=6&t=783&start=400#p13113 should be about 1.25 dB better terminated in 1K vs 100Ω.

I need to listen to it though.
https://ka-electronics.com

The spectral balance seems about the same but the 1K sounds more shrill on transients.
On bright piano the 100Ω sounded natural; 1KΩ sounded harsh almost inter-modulated on the attack.
Perhaps a 1K square wave isn't revealing enough of the differences on complex material.

I came to a similar conclusion. I forget exactly how I have the DL103 terminated. Since I’m using a step up transformer the R source is transformed. I remember using a lower value than the manufacturers recommendation. I remember it sounding “over damped” using a higher value. I don’t remember a big frequency response difference. Mostly a restricted dynamics kind of thing. I didn’t however try to measure anthing.
Top

100Ω is definitely the sweet spot of the three choices above.

I had no intention of using it any lower than 100Ω but wanted to see what happens.
At 30Ω loading becomes obvious in terms of level but there weren't drastic sonic changes.
At 10Ω, which is unrealistic, the level was greatly attenuated and it began to sound strained.

There were no huge changes in spectral balance but large changes in level as expected.
A 10Ω termination loads the DL-103 by about 14 dB.

1KΩ is unlistenable.
Square wave response doesn't show significant changes between 100Ω and 1K but with complex material the lightly-loaded cart is screechy-sounding.
I hear the same things with a lightly capacitively-loaded moving iron Stanton 681.

I decided to survey Needle Doctor's "low output" MC carts below $1000 to see what the typical recommended minimum loads were.

Audio Technica, Denon and Sumiko, where specified, all had 100Ω recommended minimum loads.
100Ω is a very common value with some of the other brands as well.
The Ortofons had 10Ω (SPU-series) or 20Ω (Quintet-series) minimum loads.
The only ones in that price range requiring higher minimums were the Hannas at 130Ω and 400Ω. 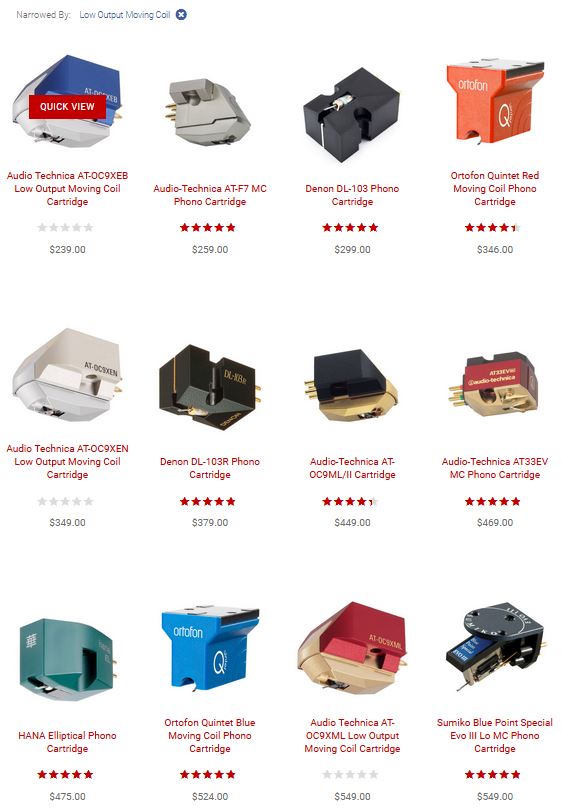 Wayne,
On another forum we were looking at the ZTX851 spice model that is supplied by the manufacturer Diode.com
In their model Rb is 0.025 ohm.
Since this makes no sense, we have altered this value to 1R5, as advised by Richard Lee.
However when running the sim again with this adjusted value, difference with your measurement goes from the earlier 0.5dB to 1.4dB.
It is unlikely that a sim is so much worse as the real thing, so my question to you is wether you could measure with a 60R resistor producing 1nV/rtHz at the input as an attempt to better understand things.
Hans
Top

I no longer have the Protoboard.
The one assembled PC board I have is installed and being used with my DL-103.
I'm enjoying using it too much to really want to mess with it.
I'm hoping to have time to assemble the only other board I have soon and could test it then.

Can you steer me to the model and thread?
One potential difference is the measurement bandwidth.
AudioTester doesn't specify the steepness of their analysis bandwidth which, IIRC I set to 20 or 22 kHz kHz. (SR was 96 kHz.)
Then there's always the difference between reality and the virtual.

IIRC my rbb' number came in a little under 2Ω.

At this point I'm not very wrapped around the axle of whether its 0.5 or 1.4 dB difference because in practice, with a real cart, its damn quiet.

I haven't heard from ricardo in awhile and had been concerned about him.
Thought about Richard in the last couple of days. Good to know he's still active somewhere.
He's a member here - if he has any questions he can just log on and ask them.
https://ka-electronics.com

The lowest noise bipolar I worked with back in the day was ROHM 2sb737s (still looking for my lost stash).

It specified an Rbb around 2 ohms, so 0.025 ohm seems unrealistic.


Since this makes no sense, we have altered this value to 1R5, as advised by Richard Lee.
However when running the sim again with this adjusted value, difference with your measurement goes from the earlier 0.5dB to 1.4dB.
It is unlikely that a sim is so much worse as the real thing, so my question to you is wether you could measure with a 60R resistor producing 1nV/rtHz at the input as an attempt to better understand things.
Hans