I followed your project from a distance and just simulated your latest version.
You measured a -141.06dBu Ein, where the Sim gave -140.5dBu for the same 10 Ohm Cart resistor and Rg=1 Ohm.
This is slightly more than 0.5nV/rtHz.
Excellent result.

I wonder if a cast iron pan would work well for magnetic shielding of a prototype!

I no longer have the Lodge skillet my wife used from time to time. After she passed in 2013 and I moved in 2014, I gave her relatives "first dibs" on Debbie's extensive collection of Kitchen Stuff.

I wonder if a cast iron pan would work well for magnetic shielding of a prototype!

I have a whole collection including a Dutch oven.
Its the perfect cookware for a SHTF situation. Or camping.

Based on walking around the house with the ELF-meter my shop and office are in the worst possible location.
https://ka-electronics.com

Or best. If it works in your shop it should work anywhere!
Top

Most of my lab benches over the decades were under fluorescent lighting that isn't very quiet.

Back in the 80s when I was doing testing of star-quad (like) mic cable in my lab, I draped the test cables being compared around a fluorescent lamp tube.... that was some demonstrably better mic cable.

My tester for EMI, hum, thermal drift is a hair drier. A cheap tool that does it all.
An anecdote about thermal stability:
A design of mine about a test equipement to test TV reference monitors.
When they put my proto, in thermal testing to check the compliance with requirements about stability of levels and timings.....About nothing happened, so they thought their heat oven and probing equipements were out of order.

Thanks everyone for the kind words.

Whilst unloading the dishwasher the steel bread loaf pan suggested that I try it as a shield.
I did.

Removed the DL-103 from the input and oriented the preamp's Hammond enclosure so I had hum.
I loaded the whole gizmo into the loaf pan and covered it with the cookie sheet as a cap to enclose the Hammond enclosure.
Other than the cable exit there was no gap.

Low-grade steel does not reduce 60 Hz and harmonics.
There's no way this is electrostatic with two boxes plus a ground plane.

The magnetic hum field is strongly horizontally polarized: Both the ELF-meter and preamp null best when vertically-oriented at right angles to the field.
The same was true of the Protoboard.
(FWIW all the electrical in the room runs under the sub-floor horizontally. I measure about 35-70 mG near the Romex.)

Despite the very low-level hum with the DL-103 connected I'm measuring an unweighted S/N of 72 dB relative to 1 kHz 3.54 cm/s single-channel modulation.
That number improves to about 80 dB S/N with A-weighting.
(IIRC Self used a 400 Hz HPF for his MC measurements. Applying a second-order 400 Hz HP filter also measures about 80 dB S/N.)
https://ka-electronics.com

FWIW the DL-103 seems to track fine in the low mass ADC arm.

There doesn't seem to be much on the web regarding the mechanical impedance of the DL-103 at low frequencies.

My initial noise and listening tests were through the RIAA path.
I was running the front end at maximum gain which, according to my quick calculations, was about 6 dB too much for the flat path.
The RIAA EQ's path has the 75µs passive pole first.
Based on the gain structure its almost impossible to overload the EQ'd path.

One thing you learn quickly about RAW, flat, recording is that you need a lot less gain than you think you do.
A good rule of thumb is 20 dB less than a typical, 1 kHz RIAA-EQ'd gain.
That's often not enough headroom particularly if you want to leave a little room to reproduce lower-level clicks.
For the MM preamp I chose -23 dBFS.

If you're doing flat recording, the best way to determine gain is to work backwards form the converter overload point.
My two A/Ds are 2V RMS and 4 VRMS.
The PCM-EVM is 4V RMS.

I lowered the gain by 6 dB so that the total flat gain is 62 dB and made a recording of "Southside of the Sky" from Yes' Fragile album.
The reduction in flat gain can be compensated for on the RIAA EQ board at the post-EQ gain makeup stage.

"Southside of the Sky" is the last cut on the A-side of a 47 year-old disc I've played a million times.
The peak level was about - 1dBFS so I actually need even less gain.

Just for grins I decided to run Spek on the RAW, pre-emphasized flac file. 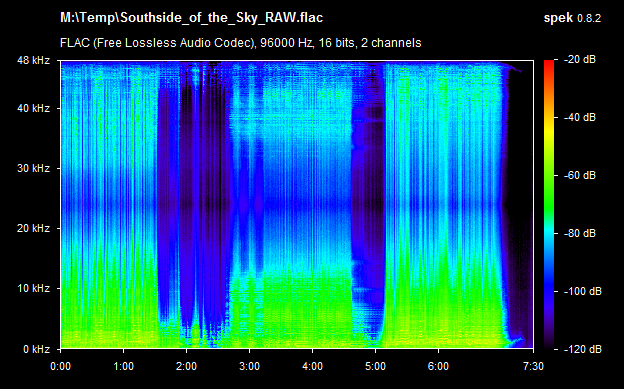 I'll apply some EQ to this file in DSP so our ears don't burn out listening to it and post a short segment.
https://ka-electronics.com 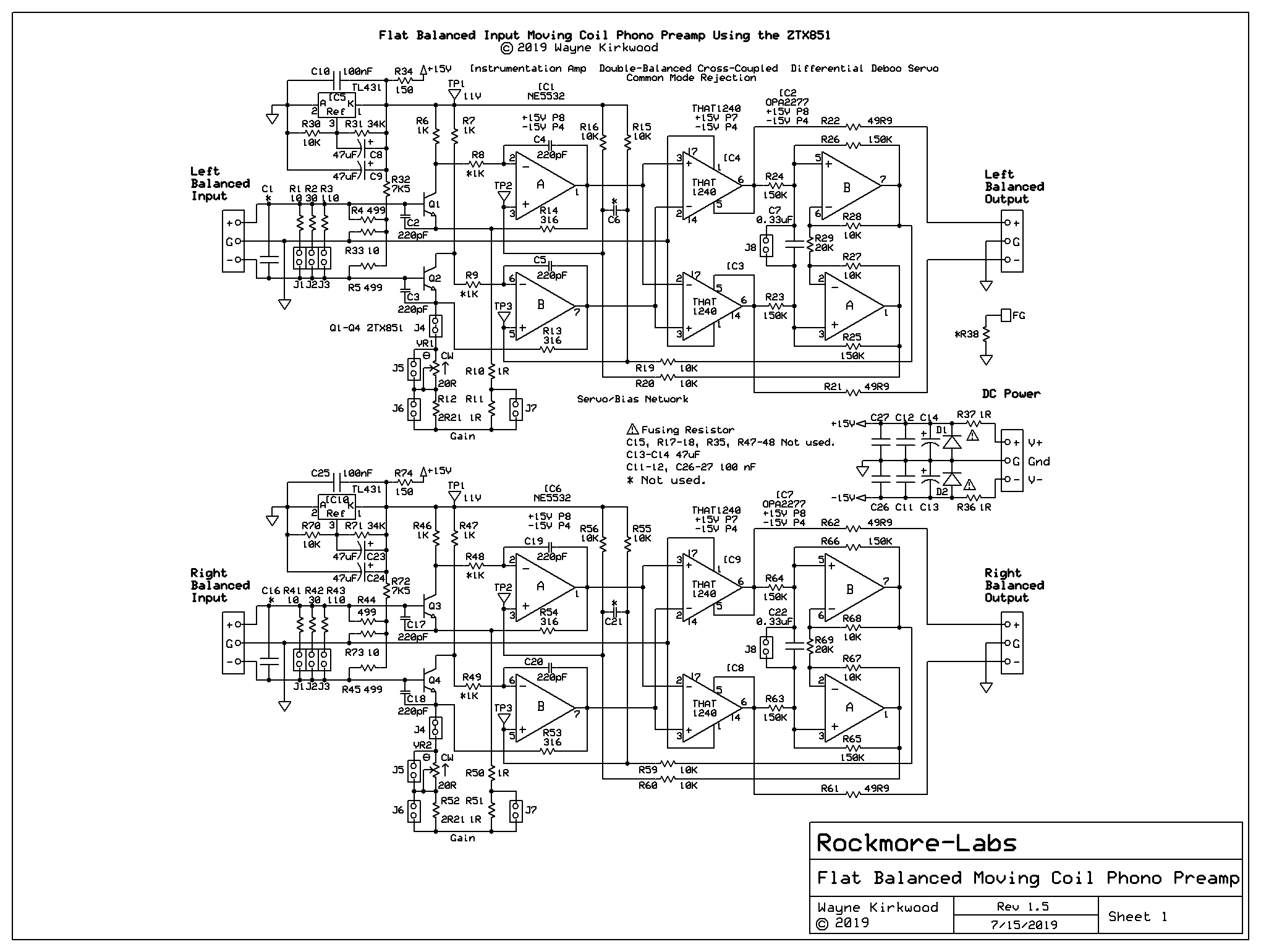