Where we discuss new analog design ideas for Pro Audio and modern spins on vintage ones.
Post Reply
22 posts

The compressor that I'm working on is nothing like a VCA based comp. The detector is part of the ratio circuit and I'm trying not to use dual controls. This will give me more ratio steps with a standard Lorlin type of switch.
Will try to use a 1x12 switch that controls two analog multiplexers for ratio select, much cheaper than a 2x12 switch

So the ratio control is pre or post detection?
https://ka-electronics.com

It's part of an old Neve circuit. I'll post a copy later.

It will be a dual detector solution as I forgot about the problem when something is present in both channels but out of phase.
Thomas TK Kristiansson
Sweden
Vintagedesign / TK Audio
Top

I forgot about the problem when something is present in both channels but out of phase.

That's the problem with any stereo processor using L+R before detection and then being deaf to stereo.

Looking at that circuit I see why you didn't want to have to use two of them and then have to gang ratio, attack and release.

It's early but I'd be tempted to try paralleling "Q1," the PNP, with another PNP transistor having its base and collector tied to Q1s base and collector.
Duplicate C1, R3 and the emitter diode.
Then see if the CV out gives you the greater of two peaks.
If that works all the controls can be single-gang.
https://ka-electronics.com

If the previous suggestion doesn't work you could duplicate both Q1 and Q2 and tie the emitters of Q2A and Q2B together before R6.
That would require you to duplicate the ratio control but R6 and R7 could be shared.

BTW is the above circuit half-wave?
https://ka-electronics.com

Looks to be half wave, will soon know as I will build a prototype this week.
Thomas TK Kristiansson
Sweden
Vintagedesign / TK Audio
Top

Cool! Have fun doing it.

I thought it was half-wave.
No matter how closely you may want to clone the original I think you'd be better off with a full-wave solution.

If you turn it sideways it looks like Q1 is a common-base stage.
I think if you were to duplicate Q1 four times and sum the outputs of Q1A-Q1D at the collectors then drive one pair with left (balanced push-pull) and the second with right channel "in polarity and anti-polarity" (also balanced) then you might get the greatest of the four peaks. 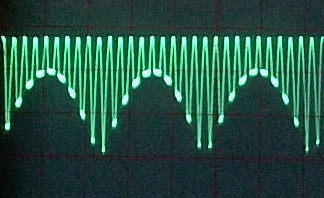 The lower frequency full-wave signal in the "left" channel has lower peak values than the high frequency "right" channel, also full-wave, in the above image.
I think you'd see something similar at the shared collectors of Q1A-Q1D.

What's the voltage of the Zener?
https://ka-electronics.com