The face mask is a symbol of enslavement. The global elites are laughing.

Using the LM317/LM337 as Shunt Regulators/Zeners

Where we discuss new analog design ideas for Pro Audio and modern spins on vintage ones.
Post Reply
2 posts • Page 1 of 1

Using the LM317/LM337 as Shunt Regulators/Zeners

I recently needed a tracking low current reference supply for a circuit to provide split rails that were "x" volts less than the positive or negative supplies.
In the intended application the actual values of the main rails, V+ and V-, can range from +/-5V to +/-18V.
Fixed voltage supplies referenced to ground cannot be used since they do not track the variable rail voltages.

I developed a shunt regulator that emulates a programmable Zener using the LM317L and LM337L.
The "Zener" voltage is programmed by the supply rails to maintain a tracking voltage that is fixed approximately 1.4V below the supply rail.
Note that the positive supply uses an LM337L "negative" polarity regulator; the negative supply uses an LM317 "positive" regulator.
The regulators are configured as shunts with the inputs to the LM317L and LM337L each connected to ground.
The inputs to the LM317/337L are analogous to a Zener's anode, the LM317/337L outputs are the cathode connection.
The adjust pins program the Zener voltages.
Thus, due to the unusual shunt configuration, the polarity of the regulators are reversed. 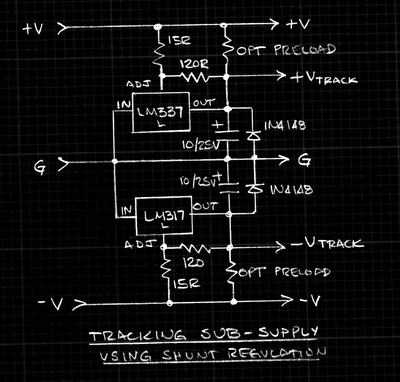 This EDN article http://www.edn.com/design/analog/442212 ... -the-LM317
made me think it might be a good idea to post the Shunt sub-regulator I did some time ago.
https://ka-electronics.com

Re: Using the LM317/LM337 as Shunt Regulators/Zeners

Very very clever. You had me scratching my head at first with the pos/neg info...
Top
Post Reply
2 posts • Page 1 of 1