Recommended implementation for THAT1512

Where we discuss new analog design ideas for Pro Audio and modern spins on vintage ones.
Post Reply
35 posts

Recommended implementation for THAT1512

I'm a newb recordist and I am chasing un-coloured mic amplification for making stereo recordings of acoustic instruments and voice.

Reading through the fantastic "brains trust" that is this forum, I have become interested in building a mic preamp based on the THAT1512 and 1646 driver.

Reading through the several discussion threads here, I have seen a number circuit permutations for these devices.

Based on the collective knowledge from the last couple of years, I was hoping that a kind soul (eg Wayne K!) might post a "canonical" circuit incorporating: split supply rails, T-biasing, input and output servos, with the various tweaks that have proven useful.

Hope this isn't too much of an ask! Thanks in advance.

Hi Paul - Thanks for joining us here.

About the closest thing we have to a "complete" schematic is here: viewtopic.php?f=7&t=339

bruno's implementation was before we came up with T-bias and before (we think) we figured out that the low gain offset could be injected into the servo's non-inverting input to eliminate one OA. The current thinking is not quite documented in the bruno2000 build but there's a lot to be gleaned from it. Sonically it would be identical.

The primary difference is T-bias. T-bias, for a given capacitor value and match, will improve LF CMR. To use T-bias, the servo output has to become differential and requires an inverter. Thus, the op amp we give back in the low gain trim improvement gets used to invert the servo. That's about the only improvement over the excellent bruno2000 build.

I'm in the process of moving in the next couple of weeks and would love to be able to draw up a schematic that includes all of the improvements and test it on the bench. Unfortunately I don't think that's going to happen soon.

In the meantime, if you feel like prototyping on a breadboard, try grafting this and T-bias on to bruno 2000's build. You'll need to take a second OP07 to invert the servo output and feed it into the opposing 1512 input. Note that the "operate" link(s) will need to break the injection into both inputs. 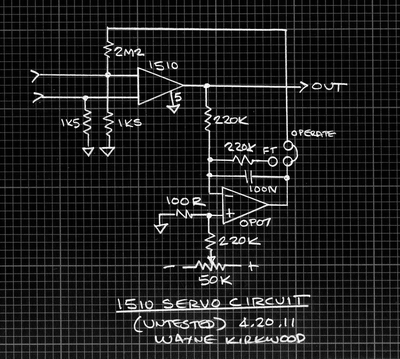 Can I just clarify some points?

1 T-bias. The inverted output from the servo would also require a series 2M2 resistor?

3 What is the trimming procedure?

4 If I need to select an opamp alternative to the OPO7, what would be the critical specifications?

Your assistance is appreciated. And all the best for the move! Paul
Top

1 T-bias. The inverted output from the servo would also require a series 2M2 resistor?

Yes. The value may require tweaking depending on the values in the "T." If enough servo range isn't available the series 2M2 could be lowered.


3 What is the trimming procedure?

Well, since no one has built the modified circuit I wouldn't chisle this in stone:

Put the link into FT.
Set the 1512 gain to it's minimum.
Measure the output offset of the 1512 for a reality check. Should be < +/-5mV typ 1 mV.
Adjust the trim so that the output of the OP07 is 0V. (Ideally it should be <10 uV. The voltage at the OP07 non-inverting input should be approximately equal to, but opposite polarity, of the 1512 output Vos.)
Switch the link(s) to operate.
Check that the 1512 output Vos is 0V.
Check servo operation at higher gains to make sure clicking is minimized.


4 If I need to select an opamp alternative to the OPO7, what would be the critical specifications?

The OP07 is cheap (35 cents), passes no audio, but has low input Vos and low Ibias, and low Ios.
Bifet op amps with high Vos (and drift) and high bias current and Ios bipolar op amps are poor choices.
An OP77 is a good choice and - if money is no object - the LT1012.

I wouldn't allow much more than 66 dB of gain. If you use inductors they are going to have a small DCR. The pot,if a good one and new, may have 2 ohms. Rstop (I'd use 2 Rstop) could be as low as 3-4 Ohms.
See: http://www.ka-electronics.com/that1510/ ... n_rev3.xls
I think you'll find that gain adjustment with a pot is going to get pretty touchy at those high gains.
Switches are the best option. If you use a pot, consider reducing the maximum 1512 gain by 6-10 dB and put in some post-preamp gain. Though not optimum from a noise perspective it places far less demands on the pot.


And all the best for the move!

Thanks! Got a pickup truck?

Thanks for the supplementary info.

I was intending to switch the gain, so the spreadsheet is really handy.

And all the best for the move!

Thanks! Got a pickup truck?

I do have a 4x4. Getting it to you (over a few thousand km of Pacific ocean) could be a little tricky

mediatechnology wrote: About the closest thing we have to a "complete" schematic is here: viewtopic.php?f=7&t=339

Well, maybe that thread has changed in the intervening time: it's just (COMPLETELY UNFAIRLY GORGEOUS) build pics now. Nice job Bruno2000: you can build gear for me anytime - how about starting today?

I had to order some parts to fix a friend's guitar amp and while I was paying shipping I decided to plunk down for a handful of THAT1510 and 1512 8-pin DIPs. Here is my application:

I am a "Sunday driver" - each week I mix house sound, send out a webcast, record live to 2-track for CD duplication, and (when the music intrigues ya) capture multitrack into Pro Tools for possible later mixing/editing/whatever. This is in the context of a Presbyterian church service; the music is a 30-or-so voice choir, and band with drums, bass, Hammond B3, piano and sax.

I do not have a pickup truck.

What I do have is the desire to get some use out of a nice-sounding, well-built 16 channel line-only mixer I was given, for pre-mixing some things like the drum kit, the Leslie for the B3, and (let's face it) the thrill of the chase. My intention HAS been to throw together a few one-tube mic preamps but that project hasn't gained any traction yet. The line mixer has regulated +/- 18V rails off a raw +/-24V supply and it seems to me I could pop together 8 or 16 mic preamps and insert them after the input jacks without a whole lot of effort, expense, or dreaded metalwork. It was from researching that idea that I stumbled upon this forum and so I joined.

First off: this will be a KISS, quite-good-is-quite-good-enough project, I think. I believe I can get away with injecting the THAT chips servoless into the stage after the line receiver chips (EQ stage - on either the right or the left of the 33 uF capacitor at the upper left), so I'd like to try a one-chip implementation first. I have the THAT data sheet and I'm attaching part of it for reference. I'm also attaching part of the Rane MS1 mic preamp schematic, showing their signal/clip indicator circuit, and the schematic for the relevant section of my line mixer.

To me, the simplest way to start looks to me like this:

a) build a 48V phantom supply, which will live on the primary side of a batch of mic input transformers. I have enough transformers on hand for at least 6 channels - I will reserve the transformer-input channels for any phantom-powered mics, and I will thus have two flavors of channel - w or w/o phantom & transformer. If I discover a need for more phantom inputs, I can either buy more transformers or bite the bullet and retrofit the rest of the THAT circuit from the next pic in the data sheet. Those channels will have a minimum gain of 10 or 20 dB depending on which transformer they get, so I suppose I'd be better off using the lower-gain THAT chip on those channels. (That's a question.)

b) build a group of THAT 1510 or 1512 mic input circuits, as shown on the THAT data sheet, with switches for 1. polarity normal/invert 2. mic/line (in other words, with the THAT circuit or without, as originally built) and 3. phantom power on/off. A pot (possibly a rotary switch if I see that I have enough room) for variable input gain. These modules will be powered from the existing rails and will inject the mic signal at the 4K7 resistor (or at the coupling cap next to it if the THAT's DC offset is too much.)

Now for my questions and data-sheet "design" ideas, of course....

The question above about which THAT chip to use. I have no ribbon mics at this time, it's a mix of LDC's, SDC's and dynamics. My Soundcraft mixer never needs the gain knobs cranked up terribly high.

I'm concerned about clipping. My two favorite choices are 1) to build the Rane signal/clipping circuit, calibrated for the THAT's clipping point, and so have a warning light just for the mic pre stage, or 2) to recalibrate the existing clip/signal indicator circuit in the line mixer to be accurate for the mic channels' clipping points. I'm leaning towards 2), but is 1) a good/better option?

Also, I think the mic pre signal can be injected after the 33 uF DC blocking cap if I am reading the EQ schematic correctly: the LM833 op amps in the EQ section are all AC coupled so they would not need the additional cap - but if so, why is it there?

The next task (assuming all goes well) might be to build out a few more buses for flexibility and maybe add another 8 ins (I have most of a second identical mixer for parts), but that's not going to happen right away.

It occurs to me I can get started even more simply by pulling the BurrBrown IN134 and making a little adapter board that hangs off of the gain pot and the polarity switch.... That could be excellent!
Top

I am not really qualified to comment about the 1512 since I've never melted solder around one.

That said I am not a big fan of the RANE clip LED circuit. I would suggest rolling something of you own based on a LM339, with peak hold on the OL LED and no funny nonlinear stuff hanging off the immediate audio path. Any nonlinear loading can reflect back into audio, and/or dump funny current into grounds. Keep all LED business, including holds, between voltage rails.

Not saying the RANE circuit is bad, just that it could be better IMO, and a great simple circuit to test your own design sea legs on.

JR. wrote:That said I am not a big fan of the RANE clip LED circuit.

Interesting - my reaction was - "that looks TOO easy."


JR. wrote: I would suggest rolling something of you own based on a LM339, with peak hold on the OL LED and no funny nonlinear stuff hanging off the immediate audio path. Any nonlinear loading can reflect back into audio, and/or dump funny current into grounds. Keep all LED business, including holds, between voltage rails.

Not saying the RANE circuit is bad, just that it could be better IMO, and a great simple circuit to test your own design sea legs on.

Or do a search around here... I am pretty sure Wayne has posted stuff on that subject too...