Where we discuss new analog design ideas for Pro Audio and modern spins on vintage ones.
Post Reply
11 posts

Ian Du Rieu has obtained permission from the author to post Graeme Cohen's August 16, 2006 presentation to the Adelaide Section of the Audio Engineering Society titled "Microphone Amplifier History and Design."

Other AES presentations may be found here: http://leonaudio.biz/AES/

Here are a few of the schematics from the Cohen paper: 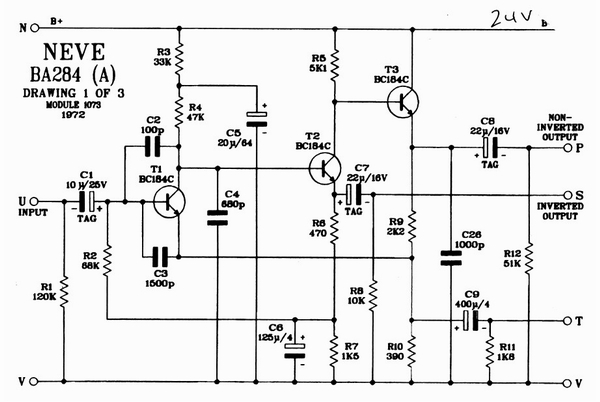 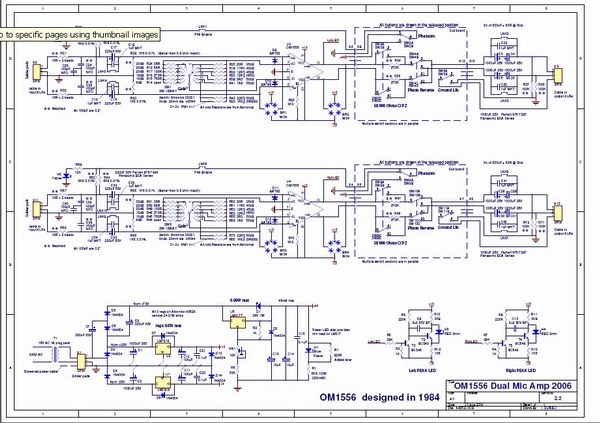 The entire schematic collection in the paper is huge and the above are just a few examples. Here's the complete list of schematics in the pdf http://leonaudio.biz/AES/Aug-15-2006/ae ... ug_15f.pdf (20 MB)


Thanks Graeme and Ian for sharing this with us!
For more information see: http://leonaudio.biz
https://ka-electronics.com

Nice compilation. Here are some corrections:

'Early RCA 1940's is somewhat incorrect; that's the BA-1A from 1945. There are 4 previous generations of AC powered RCA, and at least 2 DC powered before that so I'd call it mid-period RCA.

Thanks Ian and Doug.

Finding the dates on a lot of that stuff is tough. When I did the Ballou research for Handbook for Sound Engineers 4th edition I had to scour old databooks and datasheet copies. SImple questions like "when did the dbx 2150 VCA get introduced" was tough even for the people at THAT to answer who were there at the time. We finally had to get the answer to that one indirectly from the patent date on one of the "inventions" embodied in it. At that time dbx didn't put dates on their datasheets and we couldn't find anything more accurate than about +/- 2 years.

I can imagine how difficult it is to pin a date on something made in the 1930s.
https://ka-electronics.com

My dad worked for WE and RCA, among sundry other related companies (Vitaphone, Muzak,,) . He was sent over to England in '30's to record coronation of King George (?). He was a recording engineer for RCA in NYC when he died in 1950's.

I have some of his early engineering notebooks which are dated and well documented. Just not about circuit design.

JR - Your Dad serves as an example to the rest of us to date something we document and to write it down in the first place. Do you have any of his old recordings?

Even if it isn't related to circuit design seeing some of his notes would be fascinating. We are working on a collection of stuff for the Document sub forum and it would be cool to see something like that.

I never knew Muzak was an RCA company. Your Dad must have worked during some of the Sarnoff era. There was an article a year or so ago about the restoration of the RCA Broadcast equipment documents in Radio World. Your Dad's stuff may have a place there.
https://ka-electronics.com

I'm kind if busy at the moment but I have some cool stuff I can scan in... engineering sketches of movie cameras mounted into old model A (T?) Fords and such.

AFAIK Muzak was not connected to RCA but a letter from the president of WE was addressed to my dad c/o MUZAK. Another data point is we actually had a MUZAK receiver in our house growing up.

One lacquer that I recall hearing but haven't been able to locate for decades is an out take, of the Leopold Stowkowski cursing out the NBC orchestra in Italian when they flubbed a classical piece. My sister had some of dad's personal papers and wouldn't give them to me last time I visited her. She died about a year later, so I have no idea where that stuff went. Dad recorded guys like Perry Como and Harry Belafonte. I visited the NYC studio once but I was pretty young so don't recall much. We had an RCA tape recorder in the 50's and I messed around with recording my mini-bike doing drive by's and such.

Dad also worked at Vitaphone, the joint venture between WE and Warner brothers to make talking pictures... He worked in machinery dept.. His notebooks contain stuff about speed accuracy, wow and flutter, type stuff... Things we take for granted today.

I'd give my left nut, to be able to sit down with him as an adult and ask about his life. He died when I was like 10 YO. Sometimes life sucks....

mediatechnology wrote:when did the dbx 2150 VCA get introduced

Speaking of dbx VCAs, I have an old dBx 163 circuit where the VCA was done in discrete components.
It used 2 dual transistors. 2SA798 & 2SC1583
Any interest in seeing the circuit?

JR: I'd be interested in seeing the "cool stuff".

Speaking of dbx VCAs, I have an old dBx 163 circuit where the VCA was done in discrete components.
It used 2 dual transistors. 2SA798 & 2SC1583
Any interest in seeing the circuit?

I would. I have the patent drawings for that gain cell I think but I've never seen it with the 2SA798 and 2SC1583. That must have been a later discrete VCA. That would be a great post for the "Document" forum.

JR: Your Dad did a lot of cool stuff. I grew up around airplanes, avionics and ham radio.
https://ka-electronics.com

I have a picture of my dad's ham rig from before he was married... No amateur radio at the house when growing up, but I did my share of SWL.

IIRC early DBX VCA were selected discrete (to-92) (edit- that would be to-18) metal can transistors, wedged into a common thermal heatsink to hopefully keep them at similar temp.

PS: one of my early patents at PV was for a class A VCA with DC servo loop to avoid selecting parts or DC trims... Of course after DBX started selling VCAs inexpensively I just used that, because it was quieter/better than my cheapo class A VCA.
Last edited by JR. on Wed Jul 29, 2009 9:08 am, edited 1 time in total.
Don't only half-ass tune your drums. Visit https://circularscience.com to hear what properly "cleared" drums sound like.
Top
Post Reply
11 posts