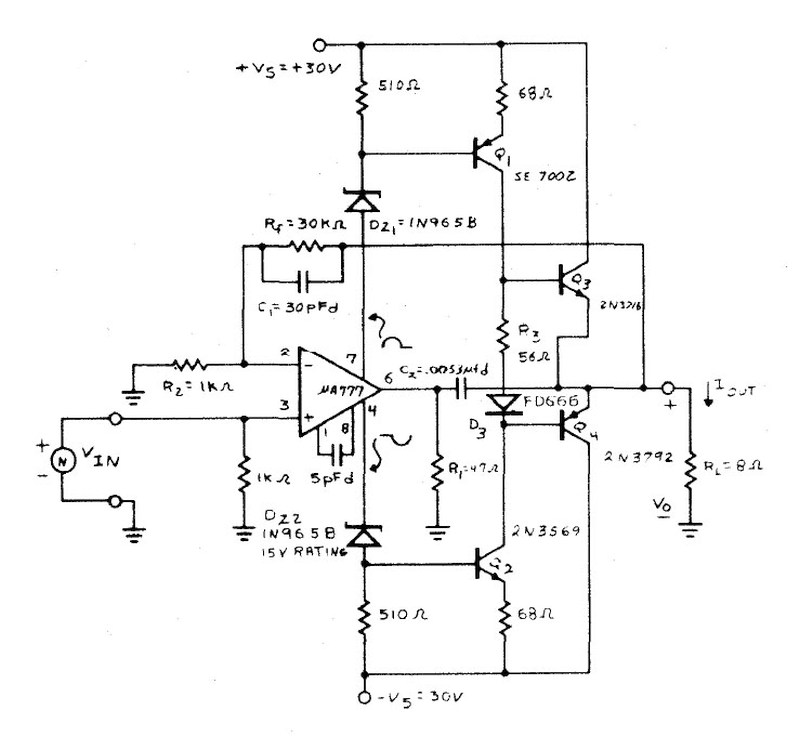 That is exactly the configuration I use all the time: sometimes is good go through the PS lines, but in case of very fast amps is better to take the current out of the collectors of two followers PNP NPN connected at the output of the OPAMP so that you don't include in the path the idle current of the device, that could be quite high above 50 MHz of GBW

the file is about the final stage of 1 A output amp for electrochemistry in one of my devices: the good point is that is almost impossible to destroy it.
For audio use the maior point is the classAB bias (not in the picture) that is not trivial and is usually obtained by unbalancing one of the two dc point setting (upper or lower) causing the opamp loop to unbalance the other same way.
The system in the picture is not dramatically fast but can stand 300 KHz @-3db easily
In the picture there is not the closing of the loop due the fact it comes from a much more extended circuitry to interface the DUTs
The switches are for the specific purpose too, but the left is a nice "muting" trick
Top

Those look like vertical output power FETs, designed more for switching than linear use.

In the Analog Devices version, AN-211, he used IGBT outputs.

I have one example where the output devices are coupled to the driver by LED/Solar cells. I should scan it. I think it had a 1 kV range.

You might also look at the Jim Williams Booster series: https://www.proaudiodesignforum.com/for ... &t=13&p=20

The evergreen Jim Williams always gives some useful tips: i've read almost anything from him and Pease too.
What I have to learn from that article is to avoid my habit to use monolithic darlingtons, that narrows the range of devices available.
What i don't like is to have emitter outputs: in case of unstable load ( i work up to Farad ranges...) collector outputs are fail safe once a current foldback is set, the same don't apply for emitters (never understood why, but current foldback is sometimes "too slow" to protect on emitter outputs.)
Anyway, due the fact i'm "lazy" i also try to obtain the result with the minimum of components and the current driven output stage helps a lot on this.
Out of this extensive review (a warm thank for this from Italy)seems i've considered ALL the booster circuits that are around...or not ?
I'll explore the n mos totem pole too.... maybe is not so bad.
Is night now... i should sleep...
PL
Top

"I have one example where the output devices are coupled to the driver by LED/Solar cells. I should scan it. I think it had a 1 kV range."
Mediatechnology

Out of this extensive review (a warm thank for this from Italy)seems i've considered ALL the booster circuits that are around...or not ?

I have a stack about 1/4" high of EDN "Design Ideas" and and Electronic Design"Ideas for Design" voltage bootstrap clippings. I'll see if I can find anything off the beaten path.
https://ka-electronics.com

Yes exactly, but pop darlingtons in place of the top and bottom common emitter stages.... I don't recall how I dealt with the class A output bias... I probably didn't, just ran it slightly starved. As i recall it worked for several years before my sister finally discarded it.

Out of this extensive review (a warm thank for this from Italy)seems i've considered ALL the booster circuits that are around...or not ?

I have a stack about 1/4" high of EDN "Design Ideas" and and Electronic Design"Ideas for Design" voltage bootstrap clippings. I'll see if I can find anything off the beaten path.

Don't forget the collections of ideas for design books they used to publish. When I was filling my brain with a library of circuit tricks, I read those ideas for design voraciously, and the IC company applications manuals, and.... whatever I could get my hands on.

Eventually I started to see the old ideas being recycled to pimp some companies new devices and lost interest. I'm sure there may be a new idea out there somewhere but this topology has been well explored over the decades.

@ plupo Darlingtons are nice but harder to manage Vbe drops for common collector class A/B amps output stages. Peavey didn't like trim pots in production and very successfully biased single junction output devices, with diodes and thermal coupling, but i recall one modest (35W?) guitar amp that used darlingtons for the output pair. This amp model was notorious for having horrible (audible) crossover distortion when cold, like sitting on a dealers show room floor in winter. After a few minutes playing it cleaned up nicely.

I was messing around with a trick output stage bias scheme that involved a small transistor array to directly sense across the emitter resistors, commanding a minimum current for one polarity then saturating when that was exceeded. It was all inside the overall negative feedback path so distortion was minimal. My trick circuit cleaned up that darlington output stage amp when cold, but there was little interest to try anything that different on a high volume application. That was the last and only darlington amp I ever saw Jack Sondermeyer (RIP) do.

Thank JR , yeah darlingtons are not nice guys, those are out of a sort of lazy behavior I have in counting" how many soldering I have to do today".
Clearly developed when I was young, but hard habit to fight, so i still go for the lower part count the better.
Anyway , the correct biasing is hard in emitter output stages ( the thermal coupling sometimes is not enough) but become black magic on collector output stages ( see my schematics) that I love for the fact i've never burned out one since the start.
In case of current pumps, as they are, you just fool them with a fixed unbalancing current, so that the feedback loop react keeping on the other side too.
From a sound quality point of view I still have to check with some "golden ears" in some friend's studio , but the net result is that you shrink and enlarge your stages by just parallel and supplies changing nothing in the design.
I reached a level of modularity so that i just "add" the power with pre-built modules ( and changing PSU as well) with no effort.
This for the power, for the consoles is just a question of dynamics ,and nowadays of fashion, in having all discrete all to +30 (

) even to record your grandchild cry...
Top

Here is a link to a later schematic for auto bias that I scratched out in the context of a class A thread.

https://www.proaudiodesignforum.com/for ... bias#p7904 This is not the exact circuit I used decades earlier, and that one never made it to full production (my boss at the time wasn't willing to gamble on a different approach).

I offer this just as a concept not a proven design, but the prototypes I made back in the day worked (to manage class A bias in a class AB common collector output stage without thermal linkage).