Relax in southern comfort on the east bank of the Mississippi. You're just around the corner from Beale Street and Sun Records. Watch the ducks, throw back a few and tell us what's on your mind.
Post Reply
149 posts

mediatechnology wrote:I think the 4000 hour lifetime for the closet lights might be good enough.

When I changed out the incandescents in some of the bedroom and hall closets some of them may have been the originals installed in 1954 by my Dad.
They still worked, had beautiful brass bases with old GE markings, and had probably been used for less than 100 hours over 56 years.
I almost never turn them on longer than a minute.

The Utilitech's don't run quite as hot as I would expect considering they have no heatsink.

My cheap utilitech that was flickering had a huge metal HS around the base, looks like the new LED lamps scraped off the extra cost that added.

A few weeks ago I replaced the 2 bulbs in my bedroom ceiling fixture with 60W equivalent LED bulbs, and room is almost too bright, with a very white light. A good thing. Since I use bedroom lights for maybe 10-15 minutes a day, bulb life is not much of a concern.

Based on that good experience I decided to replace the 4x CFLs in my bathroom vanity with similar 60W equivalent LED lamps (9W actual). Wow, the room is so much brighter that immediately I had to clean the bathroom sink, that I now could see how dirty is was.

These new lamps claim 18 years or something close to 20,000 hours. We'll see,,, sounds like lifetime guarantee for me.

This weekend I'll be spending more time cleaning my bathroom...

I may consider upgrading to LED bulbs for my two candelabra ceiling fixtures in my main room. Both take 5 small base bulbs each and they need to be dim-able so this could add up... It would be nice to get at least one usable for extra lighting in my work area. Right now I pretty much leave them turned off.

I recently hung a five-tier chandelier that we had in storage.

The 8X 60W candelabra-based incandescent lamps pulled 480W at full-up and were blinding.
Dimmed they were orange and had carbon deposits inside the glass.
Some were the original Sears lamps.
In the summer this thing is the space heater you don't want on.

The dimmable Cree B13 use only 5W at full-up so the entire fixture when set to "blinding" brightness only pulls 40W.
Being a cave-dweller and sensitive to light I usually run them dimmed.
They are beautiful with a much cleaner 2700K even at low levels.

This led to an incandescent search and replace mission over the last few months.

Having replaced all the outdoor security and inside residential lighting with LEDs it was time to go after the less obvious wattage hogs and more obscure bulb shapes.

I replaced the two refrigerators 40W with clear LEDs.
Those were easy (using Feit Electric) and so far no complaints from the LED in the freezer.
Though their duty factor is low and the power savings nill the incandescents over time get really dim.
The LEDs brightened up the 'fridge with a crisp white light.

The vent hood's 2X 35W Halogen were big current hogs. (And blinding.)
It took me forever but I finally found some "MR-16" "LR-16" E27 5W LEDs with a short neck: http://www.ecolocityled.com/product/led ... ight_bulbs
EcoCity has great customer service, the lamps look great, and aren't as harsh as the Halogens they replaced.

My next experiment are the "ping pong" S11's used in an antique pole lamp: http://www.lightbulbsdirect.com/CTGY/LEDS11.html

The two that I don't think I'll ever be able to replace are the electric ovens and the lava lamp...

The most obvious target are T12 florescent lamps in the garage.
I'm not looking forward to spending an hour with my hands over my head unwiring ballasts so I'm going to wait until some tubes fail.
The electronic ballasts seem to make the tubes last longer so I may have a long wait.
https://ka-electronics.com

Coincidentally last week I replaced four of the five lamps in my 5 spoke candelabra with 4W LED (walmart specials), They came in two packs so i'm short one. There is very visible light pattern difference between the new LED lamps and the one old incandescent. The LED bulbs beam a bright light disc on the ceiling while the old incandescent is more diffuse. Since I like more light the bright pattern doesn't bother me...

I have another 5 spoke candelabra in the living room I use even less... I may buy some 5 or 6 W LEDs for the dining room area where my assembly bench is (no such thing as too much light). I'll move the 4 W bulbs over to the living room fixture that I turn on a few times a year (while cleaning).

It also helped that I cleaned 30 years of dust out of the glass bowls around the bulbs.

I still have a bunch of CFL lamps in rooms around the casa but i replace them with LEDs as they fail, still not as often as incandescent was. The only lamps I will keep incandescent are in the leg warmer fixture mounted under my computer desk for some localized heat in the winter months. One of them is burned out now but no hurry it's august.
Don't only half-ass tune your drums. Visit https://circularscience.com to hear what properly "cleared" drums sound like.
Top

Years ago I bought a 5000K "sunlight" CFL and it was so blue.
The first Sylvania 60W LED I tried were sickly pink.
Those were long-ago discontinued and I returned mine.
I couldn't imagine living with them.

I couldn't find the link to the TESS 6 pack for $12.
I need to shop NewEgg more.

I'm trying to figure out if my garage florescent T12s use shunting or non-shunting sockets.
If I recall the ballast wiring correctly they are not shunted and rapid/programmed start.
That makes it easy to remove the ballasts and use single-ended-powered "SEP" LED tubes with minimal re-wiring.
Hot and neutral just feed one end.

Using double-ended-powered LED replacements with non-shunting sockets sometimes requires a jumper from one end of the tube to the other.
https://ka-electronics.com


I also recently upgraded the garage T12 florescents with electronic ballasts.
There are 8 tubes out there. I had an "investment" in T12 tubes so I didn't convert to T8.
The electronic ballasts seem to be more gentle on the tubes, will work with tubes that won't light on the magnetic ballasts, and are brighter.
There is no "ooze" coming out of the ballasts.
I also suspect they'll work better when temperatures drop this winter.

Well the T12 tubes lasted almost forever on the electronic ballast. I think I had to change one tube in the last 3 years.

But I had a ballast die last week.

These come with replacement sockets which are not always needed. Since the original T12s used the type of sockets that require rotating the tubes 90°to lock them in place I replaced them with the supplied G13 which allow the tube to snap straight in. I rewired all the fixtures and physically removed the ballasts. The D416s are end-fed. One end is electrically dead.

13600 total lumens at 4000°K. The work was well worth it. My future is so bright (at least in the garage) I gotta wear shades.
https://ka-electronics.com

A Cree 800 Lumen that was installed in a lamp June 2013 has started to intermittently flicker mostly when first turned on(it is on about 6hrs a day). The bulb is the model with a glass bulb with a metal base with small fins.
Most of my house has LED lighting. Interesting thing I started using LEDs 2012 and all the other bulbs are still working well (Cree, Ecotech, Phillips, Great value, Feit). I will install bulbs like the toggled when the florescent fail.
Top

I'm writing today to announce the failure of the original PAR38 Sylvania LED lamp I installed around April 2011.
This was the one that sold me.

This LED has survived numerous lightning strikes which destroyed computers and IT infrastructure.
Not all of that time was at full bright - quite often it was dimmed.

Fortunately I had an identical spare replacement which, when compared to the other two lamps in the cluster is whiter.
It looks like the phosphor ages from closer to 3000°K to 2700°K.
The older two PAR38s are definitely a little yellower now.

The Sylvania PAR38 had a good run.
Newer ones don't have the mondo heatsink.

The energy and environmental savings of using LEDs pays for the single gas light in the front yard.
I figure it costs about $20-30/month.

...and Brian thought I was a tree-hugger.

mediatechnology wrote: ↑
Tue Jun 05, 2018 1:22 pm
I'm writing today to announce the failure of the original PAR38 Sylvania LED lamp I installed around April 2011.
This was the one that sold me.

This LED has survived numerous lightning strikes which destroyed computers and IT infrastructure.
Not all of that time was at full bright - quite often it was dimmed.

Fortunately I had an identical spare replacement which, when compared to the other two lamps in the cluster is whiter.
It looks like the phosphor ages from closer to 3000°K to 2700°K.
The older two PAR38s are definitely a little yellower now.

The Sylvania PAR38 had a good run.
Newer ones don't have the mondo heatsink.

I've seen plenty of LED failures but I have always bought the cheapest stuff I could find... that said the LEDs are an order of magnitude more reliable that CFL that spanked incandescents. We forget how routinely we had to replace burned out light bulbs.

The energy and environmental savings of using LEDs pays for the single gas light in the front yard.
I figure it costs about $20-30/month.

...and Brian thought I was a tree-hugger.

I would be and have two fireplaces.
But I have more downed wood than need for wood fires.
So my wife takes pictures of it: http://www.patriciakirkwood.com 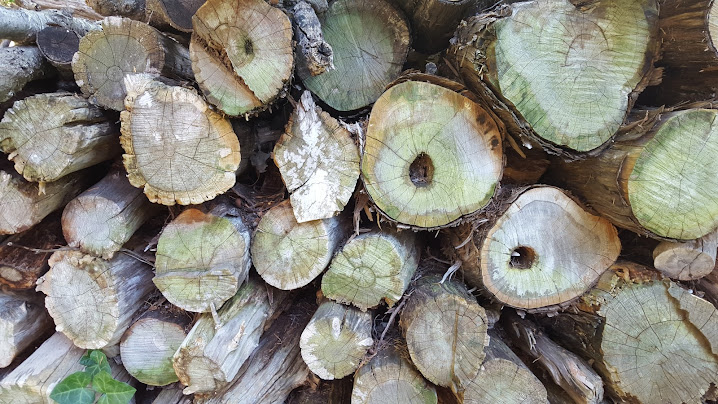 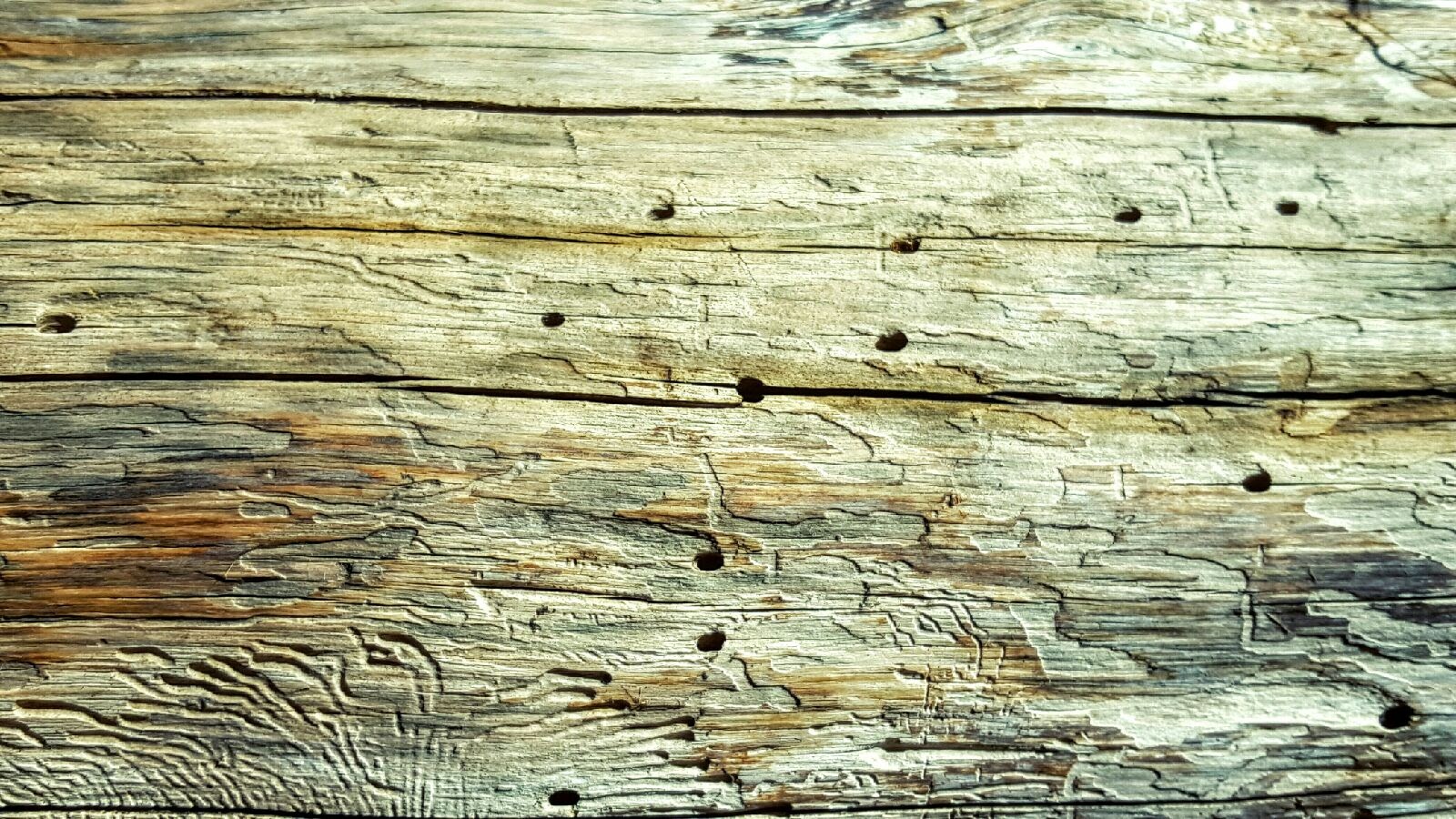