Relax in southern comfort on the east bank of the Mississippi. You're just around the corner from Beale Street and Sun Records. Watch the ducks, throw back a few and tell us what's on your mind.
Post Reply
162 posts

Of course it's a nefarious plot. Duh.
The vaccines are designed to kill you. (As well as produce a lot of profit while doing so.)
It's Nazi eugenics in 2020.

Bill Gates Sr. ran Planned Parenthood. He killed babies.
His son, Bill Gates Jr., wants to kill you.
How do we know?
For one he's said so.
I believe him.

Now why would you trust a guy who has said he's out to kill you with now providing the vaccine in order to "save" you?
I have a memory.
https://ka-electronics.com

I saw Bill Gates on TV today and he didn't mention anything about killing everybody....

I saw Bill Gates on TV today and he didn't mention anything about killing everybody....

Not today - he's came to save you today.
It was yesterday he talked about killing you.

(Edit: He thinks some of us are too stupid to remember what he said in the past. Some of us are.)
https://ka-electronics.com 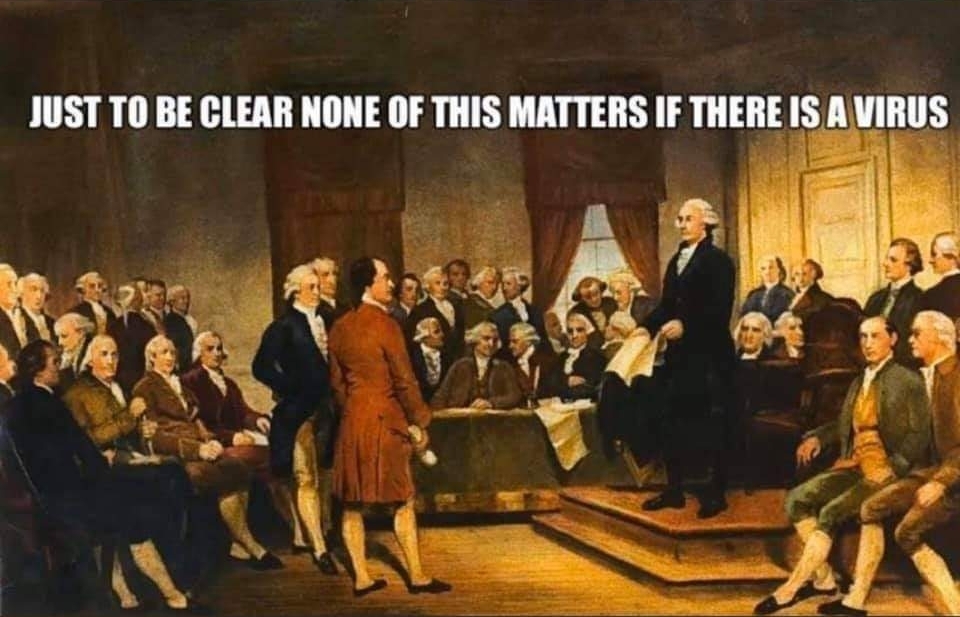 But hang on. Aren't they picked by your mate Trump?
Top

That's an excellent question Doug and the answers are "no," "yes," and "maybe."

If we're talking about Fauci and Birx the deep state, Clintons and Gates Foundation already had them picked.
Fauci has been at his post for decades and is co-inventor and funder of the China virus precursor at UNC.
(China kicked it up a notch by bolting on some HIV RNA.)
Ditto for Birx many years of "service" prior to Trump who by the way hasn't been a licensed MD since 2014.
That's the "no answer."
These "source material 'experts'" were picked for him long before he came on the scene.

On the other hand Trump could have - and should have - sought council from non deep-state/Gates Foundation actors.
He didn't.
In this situation - and many others - he hasn't properly vetted people he places around him.
The swamp provides a very limited talent pool of non swamp creatures.
That's the "yes" answer.
Not testing people he puts around him for swamp antibodies has been a major flaw.
It may be his undoing.

Trump has a way of letting people hang themselves by their own rope and showing the entire world their colors.
Lots of people before these operatives have made fools of themselves by Trump letting them act out with the nation as observers.
The far left now have exposed themselves as a post-birth baby killing organ-harvesting enterprise and we're now seeing them pivot to killing grown-ups with Chinese bioweapons.
Its a war of good versus evil, light versus dark.
Few opponents come out on top.
Fauci has made a fool of himself arguing against alternative off-label treatments such as quinine/zinc.
A few years ago he was for it, a few days ago he was against it, and now he's for it again when he reached the point he couldn't refute actual positive outcomes.
Birx accidentally admitted that deaths are being up-coded to indicate that they are China virus when the underlying cause might have been being run over.
Hospitals are all over that fraud because they receive higher reimbursements.
Debbie had to walk that little slip-up back. Ouch.
I think Trump now realizes that the "medical/pharmaceutical priesthood" are out to get him and once he begins to reopen the country the roles of Fauci, Birx et al will be diminished.
That's the "maybe" answer: He may at some point throw them overboard now that they've had a chance to wreck the US' economy and try to force-vaccinate everybody.
With models being off by ridiculous amounts and ties to the Bill Gates death cult the diminished credibility of Fauci and Birx justify their reduced roles.
https://ka-electronics.com

So your current governments lamentable performance on Covid19 is nothing to do with Trump?
Top

Being that you're in New Zealand what do you really know about main street in the US at this moment or the actual conditions here?

Doug I asked you elsewhere in another thread what the basis of your hatred for Donald Trump was and you never answered.

I'll ask again: Has Trump brought any harm to you or anyone you know?

We like to deal in facts here and, when possible, actual citations.

You contribute very little.
All we hear from you is "Orange Man Bad."
No facts just snark.

I judge people by their enemies.
Your hatred of Trump says a lot about you.
https://ka-electronics.com

Well, we are very fortunate here, only 4 deaths and a 1000 or so cases, so it is very different from the States. We also have a Government that has been very decisive, and provides the population with daily updates that give us the facts, and dont tell us what a wonderfull job they are doing. Have a look at our governments daily press conferences, and compare them with the bullshit ones the orange gnome puts out.
Heres one chosen at random.
https://www.facebook.com/jacindaardern/ ... 8426118561

As to my dislike of Trump, I take a world view. Has Trump harmed me directly? No, but he has indirectly. His views have an effect on how America is perceived by the rest of the world. And his actions have damaged relations with most of the world. I note that you are a great conspiracy theorist, and yet it does not bother you at all that Trump tells lies, every day. Dont beleive me? Just watch his press conferences. Trump is not a doctor, but he constantly gives medical advice. Trump is not an engineer, but he will venture opinions on engineering matters. In fact, he has an opinion on most things, and he is not afraid to give it. Perhaps if he thought before opening his mouth, he would come across as wiser.
And then there are his supporters.
If you want a good laugh, watch some of this.
https://www.youtube.com/watch?v=Y4Zdx97A63s
Then tell me you are proud of this group of thinking Americans.
I have lots of American friends, and we have Americans who live here and holiday here. Trump is a huge embarrassment to them.
Top

Doug thank you for a more than one sentence reply.

"His views have an effect on how America is perceived by the rest of the world."

Doug neither he or I give a shit about what the rest of the world thinks. How Trump is perceived is not really your problem now is it? He doesn't work for you.

"Trump is not a doctor, but he constantly gives medical advice. Trump is not an engineer, but he will venture opinions on engineering matters. In fact, he has an opinion on most things, and he is not afraid to give it. Perhaps if he thought before opening his mouth, he would come across as wiser."

Doug I'm pretty sure all of us have given opinions on things for which we are not experts including yourself. When you've given your opinion Doug it doesn't always mean that you're full of shit or lying.

"I have lots of American friends, and we have Americans who live here and holiday here. Trump is a huge embarrassment to them."

I probably wouldn't like your friends very much either and I seriously don't give a shit if you or they are embarrassed.

Trump's approval rate in the US (where it matters) has risen during the China virus.

Trump didn't start this virus - it came from China and was funded by the US during the Obama years. Maybe we should blame the people who created and released it rather than point fingers at those trying to deal with it. That however doesn't serve your hatred.
https://ka-electronics.com