How I Finally Got To Live Chat For Support

Relax in southern comfort on the east bank of the Mississippi. You're just around the corner from Beale Street and Sun Records. Watch the ducks, throw back a few and tell us what's on your mind.
Post Reply
4 posts • Page 1 of 1

How I Finally Got To Live Chat For Support 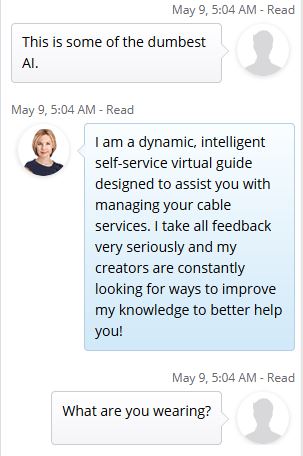 You can see her picture? Ask her if she (it?) is wearing underwear? (sorry

There are successful companies applying human-like AI to replace the "waiting on hold hell" that used to be typical customer service, or "have you reset the modem and tried again" from duleep in bangalore (no offense Duleep)?

I can imagine an even mediocre AI being better than many customer service pukes I have dealt with over the decades.

Had to laugh the other day. I've been having trouble with my laptop not charging when on, due to Windows 10 updating without telling me. I found a call centre number, rang up, and threatened to sue them if they didn't fix it.
Then I got a call from them saying they would like to work on it. I had complained also about Windows 10 not allowing the user to decide when or if to do updates. The support rep said it was possible for me to stop updates. I said, OK show me, but wouldn't let him take over my machine. He led me to the appropriate page which of course would not allow me to update. So after arguing, I let him take over my machine. I could watch him mousing around and trying to find the settings, hilarious! I then suggested we plug in the power supply so he could see the machine not charging. Guess what! It was charging.
However as soon as I disconnected him it stopped charging again.
Makes sense they would turn the charger on for remote assist, as they wouldn't want the computer dying during a call centre marathon.
They are supposed to ring back tonight. Nothing so far.
Microsoft, the business that gets worse and worse! Bring back DOS 6!
Top

Stories like yours Radardoug make me glad I'm clinging to Windows 7 and Ubuntu Linux.
https://ka-electronics.com